The Incalculable Cost of Climate Change 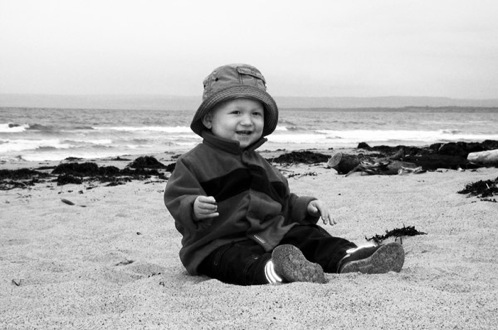 By John Irving / Desmog.ca – June 24, 2013: I’ve always had a deep affinity for nature, having been blessed to spend my childhood summers on the idyllic and mysteriously underpopulated pristine beaches of Nova Scotia’s Northumberland shore.
During the summers, my extended family would sometimes gather around the red varnished picnic tables in our backyard, for feasts of clams, mussels and sometimes oysters that we had gathered from the shores near the cottage built by my great grandfather in 1917. These gatherings – attended by young and old, aunts, uncles, nephews, neices, siblings and parents of multiple generations – stand out as cherished highlights of my youth.

One day, quite a few summers ago, a neighbour noticed us struggling to haul our aluminium boat across the hot white sand beach, and kindly offered to lend a hand, as local beach going etiquite dictates. When we finally reached the water the helpful neighbour (who happened to be a family physician) asked where we were headed. I explained that we were going off to dig some clams. His demeanour changed as he warned that it was too risky to eat the wild shellfish anymore, due to the danger of potentially fatal paralytic shellfish poisoning (PSP). I later learned that PSP was occurring around the entire region with increasing frequency.

The realization that my son might never experience the time honoured family tradition of clam digging greatly underscored the poignancy of this sad and unwelcome revelation.

This stuck in my mind long after my return to Ottawa that summer, as I pondered how something on such a scale could occur, and what it portended. I had personally and ominously been witness to the end of a traditional activity that had likely been practiced for 10,000 years.

Change is in the Air

I have been following the unfolding saga of climate change since it first started appearing in the media. For quite a few years it has been my main area of concern, and I am an abnormally avid follower of current affairs. It’s not unusual for me to read a dozen or more reports on the subject in the course of a day. Lately the deluge of articles on climate change and related events such as extreme weather has become completely overwhelming. If the frequency of media reports is at all indicative, the impacts of this phenomenon are accelerating very rapidly. But perhaps even more telling is the increasing concern of the experts.

Scientists and science journalists are alarmed. And scientists are a curiously conservative bunch. Professionally obligated to deal in evidence and not emotion, you may have read or heard statements such as “we’re not in the business of making predictions.” The scientific culture is one wherein statements are scrutinized or criticized if there is no credible source (typically peer-reviewed papers published in esteemed scientific journals) to support an assertion. Given that, for there to be such a vast scientific consensus on the fact that climate change is happening, and that it is almost exclusively caused by human generated greenhouse gas emissions, lends significantly more gravity to this issue than perhaps most people appreciate.

And yet, the effects of climate change, even to a casual observer, seem to be dramatically outpacing most of the predictions many are familiar with. I asked the noted scientist and author Michael Mann, who introduced the world to the famous “hockey stick graph,” about this discrepancy and the track record of underestimating the rate of climate change by the IPCC and he responded:

“The current projections (e.g. as described in the most recent report of the Intergovernmental Panel on Climate Change) have in many respects been too conservative, underestimating for example the rate of decline in Arctic sea ice. That may, in turn, be influencing the pattern of the jet stream, in such a way that certain effects – heat waves, floods, droughts – become more persistent. The precise impacts are uncertain. But rather than being an argument for inaction, as contrarians in the climate change debate often like to claim, it is a reason for more immediate and more concerted action. The uncertainties could well cut against us, giving us impacts that are considerably worse than what the model projections currently forecast.”

I also asked acclaimed scientist Naomi Oreskes why scientists are reluctant to publicly express the full extent of their concern, as many have to me in less public venues, and she supplied the following comment on the subject:

“We call the phenomena ‘erring on the side of least drama.’ The culture of science also discourages scientists from talking about how they feel, so even if they feel worried, concerned, anxious, scared, terrified, these are not words that scientists will normally use. Scientists are ill-equipped, both individually and collectively, to speak clearly about things that are worrisome – or indeed, that provoke any kind of emotional response at all.”

Meanwhile, journalists, scientists and citizen groups alike have taken on the unfortunate but necessary task of combating the fossil fuel industry’s well orchestrated and heavily funded misinformation campaign. A campaign dedicated to undermining and bringing the established science into doubt in the minds of the general public for the sole purpose of protecting their vast and grossly disproportionate financial interests. At the same time the mainstream media has been under-reporting and frequently mis-reporting the issue while the climatic stability that has facilitated the rise of civilization for millennia seems to be rapidly deteriorating before our eyes.

Given that CO2 molecules will persist in the atmosphere for a century even if all emissions ceased today we know that the trends we are witnessing will continue well into the future. If we unleash any of a number of uncontrollable tipping points, we may induce changes that will continue for thousands of years, if we haven’t done so already.

Whether or not someone is familiar with – or concerned about – the mechanisms behind this phenomenon, one only need scan the headlines on any given day to appreciate how our world is changing.

Any one of the above should be cause for grave concern, in combination they represent unprecedented challenges for humanity.

We are now left to grapple with the incalculable risks and costs associated with a highly unstable and rapidly changing planetary biosphere: the loss of thousands of species that have contributed to nourishing and sustaining humanity for eons. And only a select few benefit from the very cause of our demise: primarily the fossil fuel industry and its political backers. It could be argued that any member of industrialized civilization contributes to climate change just by being part of modern society. However, the vast majority of us would opt for cleaner and cheaper sources of energy if we had the choice.

Yet, despite all of these outrageous offences, and decades of warnings, our governments continue to generously subsidize the fossil fuel industry. And our political affairs seem easily swayed by disproportionate wealth, power and political influence. Organized campaigns work to deceive decision-makers and the general public about the dangerous reality of climate change or the affects of highly-polluting fossil fuels. And, by and large, we tolerate their efforts to undermine and impede the development of cleaner alternative sources of energy; sources that would mitigate the effects of climate change, reduce pollution and liberate us from energy tyranny.

Ordinary people around the world, particularly the poor – now and many generations into the future – will bear the burden of this incalculable expense on behalf of the fossil fuel industry and its “externalities” – those expenses the industry outsources to the public.

These un-paid-for expenses amount to an additional subsidy of massive proportions. If the true dollar cost – not to mention the human cost – of our addiction to fossil fuels could ever be calculated, the industry would surely be insolventmany times over. Recent efforts to calculate things like the ‘social cost of carbon’ show just how expensive our continued reliance on fossil fuels really is. It’s fair to say this represents the greatest ponzi scheme in human history – by far.

If our leaders were serious about resolving this problem, nations would come together and devote all resources necessary to address this crisis immediately. STAT.

What we need (and I’m not the first to say this) is something akin to the Apollo program, which landed humans on the moon in 1969 – except bigger – if we are to avert catastrophic outcomes. It must, for instance, rapidly advance, and broadly implement, cheap and cleanalternative sources of energy, dramatically improve energy efficiency while reducing the consumption of fossil fuels and stop unfairly subsidizing fossil fuels.

There are no silver bullets here, as many will remind you. And there likely aren’t short term answers, such as geoengineering, that don’t involve huge risks of geopolitical conflict or unpredictable outcomes. But international governments are already bracing themselves forvery serious and widespread problems that are already arising from their failure to act on globally significant environmental issues.

Yet we are racing to exploit even the dirtiest and resource intensive fossil fuels while we have been warned that up to 80 per cent of reserves must stay in the ground in order to maintain a habitable planet for future generations.

It’s well past time to make the switch to cleaner sources of energy and yet we have barely begun to embrace the idea. At least not popularly. At least not yet.

In the meantime some scientists have dire warnings about how bad things could get if we do not take urgent action immediately. Paleontologist Peter Ward told me such large scale changes to Earth’s biosphere should be considered against the backdrop of the ancient history of our (one-and-only) planet:

“What is missing in the current debates about climate change and their anticipated results on both the physical and biological worlds (where in fact “anticipated” should not be interpreted in the hopeful sense sometimes attached the word, if Deep Time is any indicator) is that, like politics, we as a society cannot seem to expand our temporal view either far enough into the past or future to encompass the full effects that a rapidly warming world, with a rapidly rising sea level can wreak.

The reality is that in the deep past, the many million years old past, short term warming caused by volcanically produced carbon dioxide increases in the global atmosphere have begun chains of events ending in mass extinction.