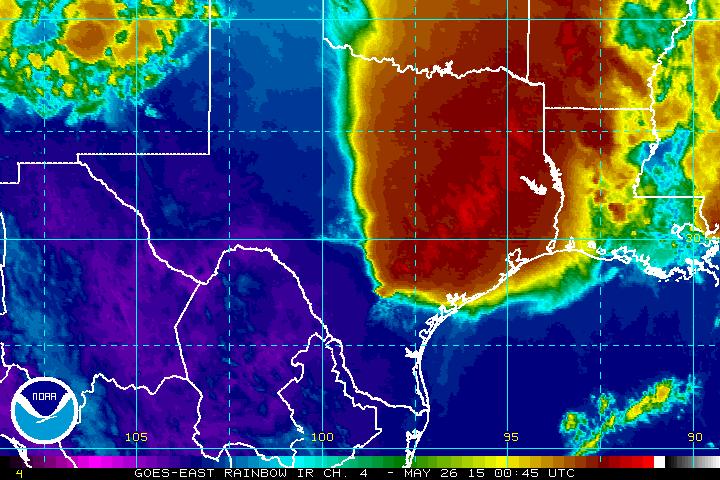 Storm systems did not moved much over the day

Tornadoes, flooding, and stormy weather currently affects large parts of central Texas. There is also live coverage, for example IBT, The WeatherChannel, or AccuWeather. The situation is still developing, because of possible dam breaches, downed power lines and trees, and black outs. Further precipitation is likely at the end of the week.

Governor Greg Abbott called the deadly flooding the biggest ever seen in Texas.

“The deadly tornado that hit Ciudad Acuna, Mexico, just two miles from Laughlin Air Force base, was one of at least 15 reported today.”

“Within a matter of hours, the Blanco River rose from 5 feet to more than 40 feet, and the flood came rushing with such force that it swept away a concrete bridge.”

“In the town of Wimberley alone, as many as 400 homes have been destroyed.”

“Tornadoes and flooding that forced at least 2,000 Texans from their homes. At least five people were killed, and 12 were missing as a result of flash floods along the Blanco River between Austin and San Antonio, officials said.”

It is possible for flood water to push bridges up, when air pockets form under the bridge, and surge rises (explained in this video).

According to Bob Henson from Wunderground, inflow of low-level moisture from the Gulf of Mexico and the combination of very slow moving large-scale storm systems set the stage for the floods. He added, Upper-level winds were largely aligned with the low-level frontal zone, an ideal setup for “training echoes” (successive downpours over the same area). In addition, rains were concentrated by several mesoscale convective vortices, small-scale centers of low-pressure that developed along the frontal bands, in some cases resembling mini-tropical cyclones.

More coverage Drivers Stranded, Homes Damaged by Houston Area Flash Flooding
On 25 May 2015, a tornado struck a Mexico city near the U.S. Mexico border, and killed 13 people and injured 230.

Chris Dolce from Wunderground, on 25 May 2015. The atmospheric configuration which contributes to the current storm and flood situation in central Texas.

Estimated Rainfall in May 2015, Texas

A southward dip in the jet stream has been locked in place over the western states, allowing it to launch disturbances into the Plains. Those disturbances provide the necessary lift in the atmosphere to trigger thunderstorm development as they intercept a warm, moist air mass in place near the surface of the earth.
Unfortunately, this weather pattern will stay in place through Memorial Day, triggering additional rounds of rain and thunderstorms.

Yet another round of thunderstorms with locally heavy rain appears likely in flood-ravaged parts of central Texas through Monday night, spreading into east Texas, eastern Oklahoma, western Arkansas and northern Louisiana.

By later Tuesday, drier conditions finally push into much of the soaked southern Plains.

Unfortunately, the large-scale pattern appears poised to snap back into its original configuration by late in the week, setting up yet another round of heavy rainfall for the last few days of May. It’s possible that final totals for the month of May could top 30 inches in parts of Oklahoma, and it appears likely that at least one location will break the official all-time May rainfall record for the entire state, which is 23.95 inches in Miami, Oklahoma, in May 1943.

Bob Henson from Wunderground, mentioned an unseasonable El Niño event is now approaching moderate strength and is projected to continue intensifying through the summer, perhaps reaching record or near-record strength for the time of year by August.

Instead of the typical lack of a summertime push from El Niño or La Niña, we’re thus left with a much different kind of prediction challenge: a summer setup so unusual that we have few analogs to go by.

A study published in April 2015 concluded: About 18% of the moderate daily precipitation extremes over land are attributable to the observed temperature increase since pre-industrial times, which in turn primarily results from human influence.

For 2 °C of warming the fraction of precipitation extremes attributable to human influence rises to about 40%.

Likewise, today about 75% of the moderate daily hot extremes over land are attributable to warming.

It is the most rare and extreme events for which the largest fraction is anthropogenic, and that contribution increases nonlinearly with further warming. New York Times and Nature

Wow: When was the last time a flash flood emergency was issued for Houston? @NWSHouston: First time. Never been done before. #houstonflood

Wow! I-10 and Washington Bridge in Houston from my location #Flooding pic.twitter.com/ng4PL41hL0

A major high-latitude heat wave sent temperatures on Thursday in Barrow, AK, up to 47°F, the warmest ever observed so early in the season. Temperature difference from normal May 22, 2015 (Climate Re-analyzer, University of Maine)

Ocean ‘blob’ could be responsible for warmer temperatures, see also The Blob (Wikipedia)

India sizzles under an extreme heat wave, responsible for killing at least 500 people.

Is tornado activity being affected by climate change?

Some related events from the past