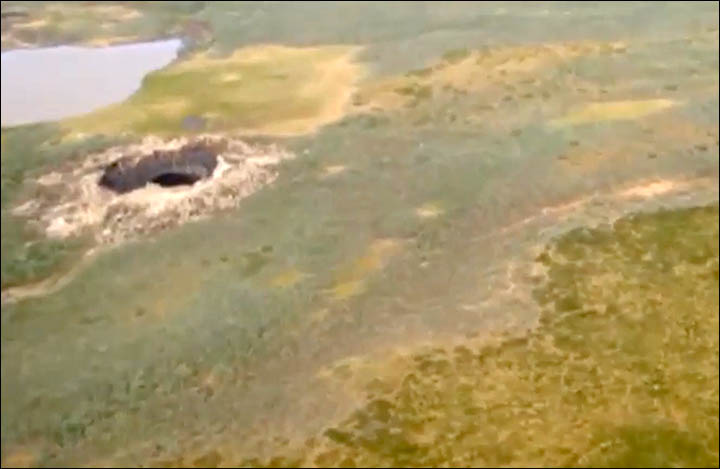 A giant hole near a lake, surrounded by forest, filmed by an approaching helicopter. Image credit: The Siberian Times

Salon: According to Anna Kurchatova, with the Sub-Arctic Scientific Research Centre, the hole could have to do with the thawing of Siberia’s permafrost, a consequence of global warming. The rapid release of gas previously trapped in the ice, she said, could have combined with sand beneath the surface to form an underground explosion.

A closeup shows that the hole is deep and potentially unstable. Image credit: The Siberian Times

The Siberian Times, explained:  The striking puncture in the earth is believed to be up to 80 metres wide but its depth is not estimated yet. A scientific team has been sent to investigate the hole and is due to arrive at the scene on Wednesday. The cause of its sudden appearance in Yamal – its name means the ‘end of the world’ in the far north of Siberia – is not yet known, though one scientific claim is that global warming may be to blame.

A report and footage highlighted by Zvezda TV says the dark colour of the crater indicates ‘some temperature processes’, without explaining more what they may mean. Others say that the darkening around the inner rim indicates its formation was accompanied by severe burning scorching the edges. There is agreement that soil around the hole was thrown out of the crater.

The expedition organised by the Yamal authorities includes two experts from the Centre for the Study of the Arctic and one from Cryosphere Institute of the Russian Academy of Sciences. They plan to take samples of soil, air and water from the scene.

The sink hole ground is covered with ice

Near the sink hole are natural gas plants, according to SPIEGEL

A researcher examines the hole

Update
The Really Scary Thing About Those Jaw-Dropping Siberian Craters

Josep G. Canadell, a scientist in Australia who runs a global program to monitor greenhouse gases, told the New York Times at the time of the study. “It [Permafrost] will be a chronic source of emissions that will last hundreds of years.”