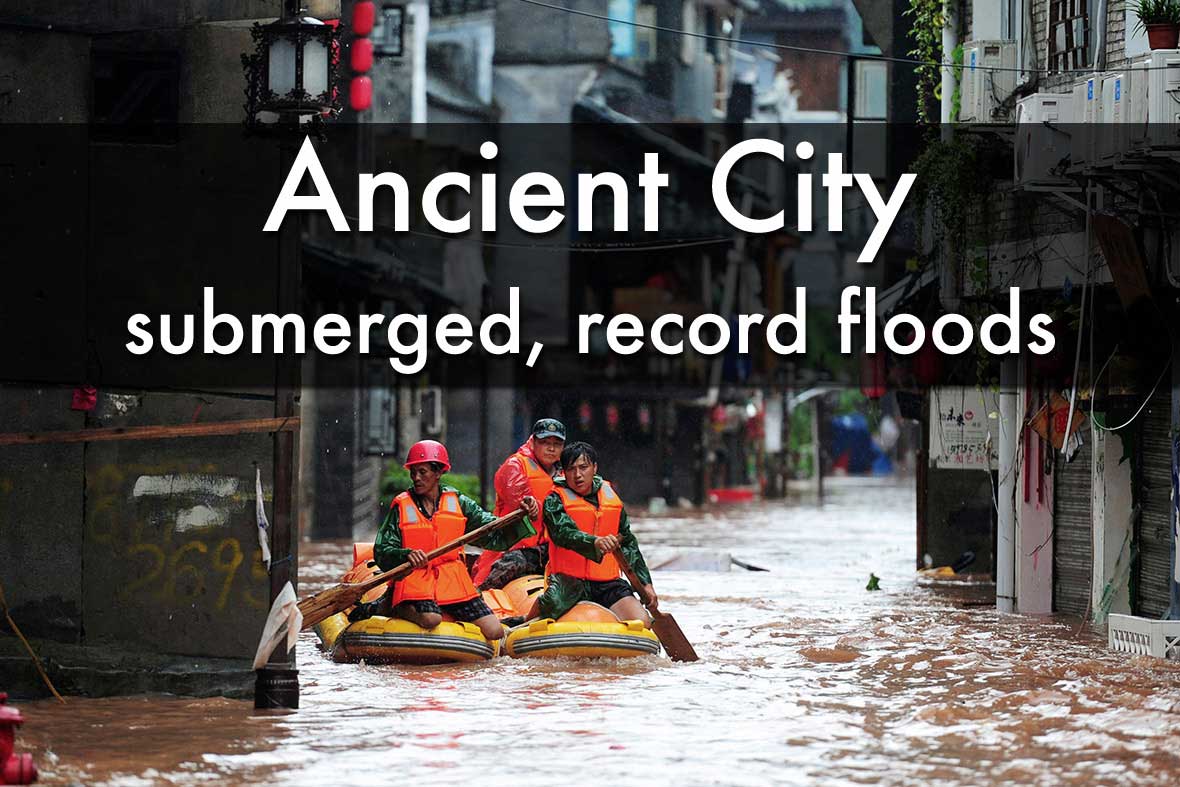 The Telegraph: According to China’s official Xinhua news agency, the Tuojiang river in the town had reached 1.1 metres above its previous highest recorded level, and several bridges had been damaged or destroyed.

Fenghuang was added to the UNESCO World Heritage Tentative List on March 28, 2008 in the Cultural category. This ancient town was regarded as the most beautiful town in China by New Zealand writer Rewi Alley. It was built in Kangxi forty-three years (1704), and has 300 years of history.

At least 18 killed in China rainstorms
CCTV: In southwest China’s Guizhou province alone, 7 people were killed in floods, when their homes collapsed or by lightning strikes, the provincial civil affairs bureau said in a press release Wednesday. Three others were reported missing and more than 91,000 were relocated.H Heavy rain, which began on Sunday night and lasted through Wednesday, destroyed 5,800 homes and damaged another 16,300 in Guizhou.

Heavy rain wreaked havoc in east China’s Jiangxi province, where 6 people have died from lightning strikes since Friday and 338,000 people in Jiangxi have been affected and 1,610 relocated. The storms damaged 227,000 hectares of crops and destroyed 166 homes, resulting in direct economic losses of 186 million yuan (29.8 million U.S. dollars).

In Hunan province heavy rain since early Monday morning. Five people were killed and 14 are missing in landslides in Anhua County. Rain-triggered disasters destroyed 1,330 homes and forced 283,000 people to relocate.

People clear debris on a flooded street in Fenghuang. Reuters

Rescuers use a boat to evacuate residents from flooded homes. Getty

Rescue workers search for people on a flooded street. Reuters

A street lamp is seen in the overflowing river. Reuters

Buildings in the ancient town of Fenghuang are submerged in flood water. Getty

Workers clean up debris from a flooded street in the ancient town of Fenghuang. Reuters

The ancient town of Fenghuang is partially submerged by floodwater as a river overflows in Hunan province, China. Reuters