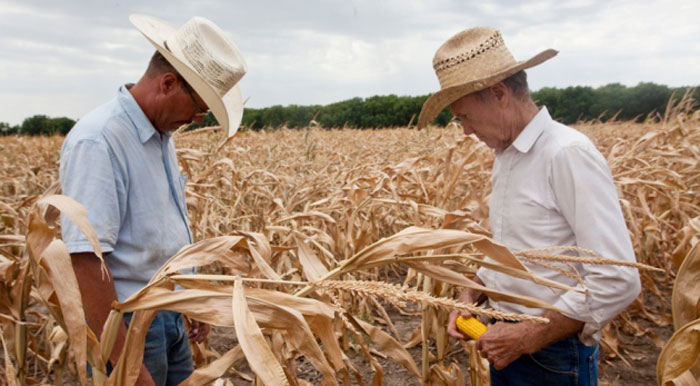 Unusually high frequency points to human influence | NASA climatologist James Hansen made headlines during the US heatwave of 1988, declaring in testimony to Congress and during interviews on prime-time television that a build-up of greenhouse gases was increasing the probability of weather extremes. Now, as much of the United States sizzles through another torrid summer and the Midwest endures a historic drought, Hansen, director of NASA’s Goddard Institute for Space Studies in New York, claims that the future he predicted has arrived.

“The climate dice are now loaded to a degree that a perceptive person old enough to remember the climate of 1951–1980 should recognize the existence of climate change, especially in summer,” he and his colleagues write in a paper entitled ‘Perceptions of Climate Change’ published on 6 August. Just days earlier, on 1 August, Republican senators had challenged mainstream climate scientists over the existence of anthropogenic global warming at a hearing in Washington DC, underscoring the stubborn political divide over climate policy. Just as he did 24 years ago, Hansen has plunged into the debate, pre-empting the publication of his study with an opinion article in The Washington Post.Hansen’s team used seasonal temperature records for 1951–80, a period of relatively stable climate, as a baseline, then analysed the frequency and scale of subsequent temperature anomalies. On average, the team concludes, the globe has warmed by only about 0.5–0.6 °C since that time, but the shift has had a significant impact on many parts of the world (see ‘What a scorcher’).

Extremely hot summers — classified as about 3.5 °C warmer than average — have affected about 10% of the world’s land since 2006, an order of magnitude higher than during the period from 1951 to 1980.The study is not the first to show a link between global warming and extreme weather3, but it goes well beyond its predecessors, concluding that greenhouse gases alone are responsible for the hot summers and heatwaves. “The likelihood that these events would have occurred without global warming is minuscule,” Hansen says.

A poll by researchers at Yale University in New Haven, Connecticut, and George Mason University in Fairfax, Virginia, suggests that most people in the United States accept the link between hot weather and global warming4. But Hansen’s assertion is running into some heavy weather among scientists.

Martin Hoerling, a meteorologist at the National Oceanic and Atmospheric Administration in Boulder, Colorado, calls Hansen’s paper an “extended Op-Ed piece”, arguing that the broader climate record does not support the link to individual heatwaves. Last year, Hoerling co-authored a paper5 suggesting that the 2010 drought in Russia was so far outside the realm of normal weather that the small rise in global temperatures could not account for it. He says that natural variability can explain most extremes, and that global warming merely enhances them.

Hansen notes that his study is purely statistical and does not try to explain how climate change could cause extremely hot summers. Kevin Trenberth, a climatologist at the US National Center for Atmospheric Research (NCAR) in Boulder, says that Hansen’s statistics are illustrative of a trend that should help people to understand global warming and the profound effect humans have had on the climate system. “It is never due to humans alone, nor is it ever, these days, just natural variability.”

In a paper to be published in the Journal of Geophysical Research, Trenberth and a team of researchers investigate the physical mechanisms that drove some extreme weather events in 2010. Using a climate model developed at the NCAR, the team investigated links between a pair of El Niño and La Niña events (in which warm or cold surface waters, respectively, built up in the eastern Pacific Ocean) and weather events such as stronger monsoons in Asia and droughts in Russia and the Amazon. Although he thinks that global warming could have a role in such extreme events, Trenberth says that climate models have not yet been able to tease out the details.

“Models have a hard time doing extremes well,” Trenberth says. But because of limited data sets for extreme weather and inadequate climate models, he worries that some people could draw the wrong conclusion: “that there is no human influence”. Source