You are here:
1950sEnergyFilmsHistoryScience Talk 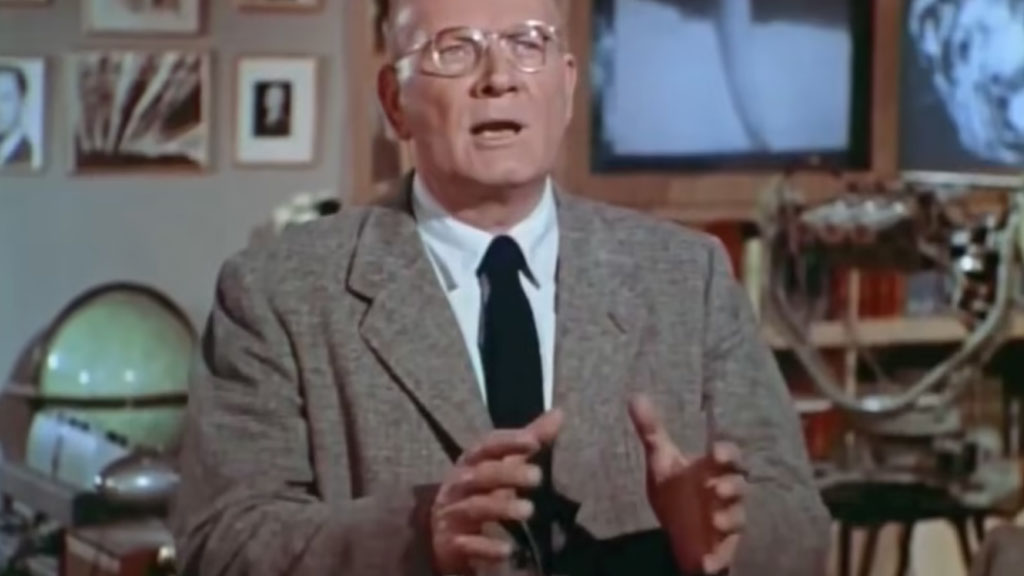 The famous Bell Telephone Hour clip, with the all knowing Dr Frank Baxter explaining a very modern understanding of climate science in 1958. Enlightening and infuriating.

In 1958, Director Frank Capra made a movie for Bell Labs to explain the expected effects of ‘Global Warming’. This was shortly after Revelle’s paper came out. Capra, was also a scientist who graduated from California Institute of Technology in 1918 and did many science films for education.
Frank Capra produced a series of science films for Bell Laboratories including:

It was in the ‘Unchained Goddess series that he focused an episode on climate science.

Capra himself had a degree from Cal Tech in chemical engineering. He used his knowledge in engineering in his film-making as well. In doing the science education series, his knowledge served him in understanding what the science of the time meant. It was already reasonably well known through the work of Callendar and Revelle that mankind was in the process of changing the climate of earth.

Based on that knowledge, Capra poignantly portrayed, through film, what might be expected from such changes.

Dr. Frank C. Baxter: “Extremely dangerous questions. Because with our present knowledge we have no idea what would happen? Even now, man may be unwittingly changing the worlds climate through the waste products of his civilization. Due to our release through factories and automobiles every year of more than 6 billion tons of carbon dioxide, which helps air absorb heat from the sun, our atmosphere seems to be getting warmer.”

Richard Carlson: “This is bad?”

Dr. Frank C. Baxter: “Well, it’s been calculated a few degrees rise in the earths temperature would melt the polar ice caps. And if this happens, an inland sea would fill a good portion of the Mississippi valley. Tourists in glass bottom boats would be viewing the drowned towers of Miami through 150 feet of tropical water. For in weather, were not only dealing with forces of a far greater variety than even the atomic physicist encounters, but with life itself.”

Plass, Gilbert N., 1956. The Carbon Dioxide Theory of Climatic Change. Tellus 8, 140–154, Source (PDF)
Gilbert N. Plass (1920-2004), following in the footsteps of Arrhenius and Callendar, drew connections between the physics of infrared absorption, the geochemistry of the carbon cycle, and computer modeling. As an associate professor of physics at the Johns Hopkins University, Plass conducted research on infrared radiation with funds provided by the Office of Naval Research. In 1954-55 he gained access to a digital computer and realized it offered an effective way to construct a better model of radiative transfer.

Using recent measurements of the infrared flux in the region of the 15 micron absorption band of CO2, Plass calculated a 3.6°C surface temperature increase for doubling of atmospheric carbon dioxide and a 3.8°C decrease if the concentration were halved. Adding middle-level and high clouds to the model reduced the warming to 2.5°C. Contrary to the assumptions of many scientists at the time, the effect of water vapor absorption did not mask the carbon dioxide effect by any means. He used these results to argue for the applicability of the carbon dioxide theory of climate change for geological epochs and in recent decades.

Stressing the intrinsic role carbon dioxide plays in our atmosphere, Plass discussed the danger of anthropogenic carbon release. He estimated that fossil fuel burning was adding six billion tons of carbon per year to the atmosphere, with more being added by deforestation and other activities. This amount was sufficient to increase the CO2 content of the atmosphere by thirty percent by the year 2000, causing noticeable changes in the Earth’s radiation balance and thus the climate. He estimated a 1.1°C climate warming per century due to human influence.

According to Plass the oceans would be able to sequester only a small amount of the anthropogenic carbon, leaving the majority in the atmosphere. He noted that if humanity consumes the Earth’s fossil fuel resources over the course of the next millennium, the CO2 content of the atmosphere would quadruple from its present value and the planet would warm by at least 7°C.

Plass pointed out in another publication (Plass 1956e) that humanity was conducting a large-scale experiment on the atmosphere, the results of which would not be available for several generations: “If at the end of this century, measurements show that the carbon dioxide content of the atmosphere has risen appreciably and at the same time the temperature has continued to rise throughout the world, it will be firmly established that carbon dioxide is an important factor in causing climatic change.

”He also noted, prophetically, that the accumulation of CO2 in the atmosphere from human activity will become increasingly important in the near future and will remain a problem through the centuries. Presaging the work of Keeling which began two years later, Plass called for new accurate measurements of the increasing CO2 concentration in the atmosphere, which he rightly estimated should be on the order of 0.3 percent per year.

Plass published four additional papers on this subject in 1956:

Shell in 1958 warned about increased carbon emissions from car exhaust

“Vehicle-to-Grid” Initiatives Could Be the Key to More Grid Efficiency
April 22, 2022