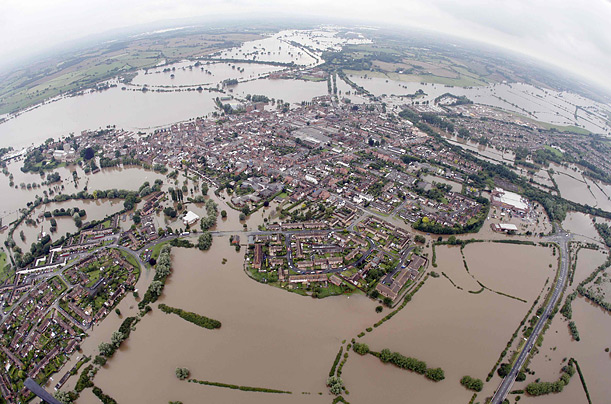 Climate change is the ultimate challenge but as a matter of fact most governments and the media are still sleepwalking and are in denial for the most part. In the video below “Influence of Arctic sea ice on European summer precipitation (2013)”, Dr James Screen explains the impacts of climate change on farming  and flooding. The best science we have suggests that Arctic sea ice decline is shifting the jet stream and thus making Britain more prone to extreme weather events.

Read the full report from the Met Office, The Recent Storms and Floods in the UK.

Rasmus Benestad, from RealClimate about the sea ice interactions…

One interesting question is how the Barents-Kara sea-ice affects the winter temperatures over the northern continents. By removing the sea-ice, the atmosphere above feels a stronger heating from the ocean, resulting in anomalous warm conditions over the Barent-Kara seas. The local warming gives rise to altered temperature profiles (temperature gradients) along the vertical and horizontal dimensions.

Changes in the temperature profiles, in turn, affect the circulation, triggering a development of a local blocking structure when the sea-ice extent is reduced from 80% to 40%. But Petoukhov and Semenov also found that it brings a different response when the sea-ice is reduced from 100% to 80% or from 40% to 1%, and hence a non-linear response. The most intriguing side to this study was the changing character of the atmospheric response to the sea-ice reduction: from a local cyclonic to anti-cyclonic, and back to cyclonic pattern again. These cyclonic and anti-cyclonic patterns bear some resemblance to the positive and negative NAO phases.

More on the science of the  mechanisms responsible for more flooding:
The Science of the Polar Vortex and Jet Stream

The Guardian about the recent flooding..

As gales swept southern and western parts of the UK, with already drenched counties bearing the brunt of the storms, it has emerged that parliament’s select committee on the environment warned in a report last year that “the current model for allocating flood defence funding is biased towards protecting property, which means that funding is largely allocated to urban areas. Defra’s [the Department of the Environment’s] failure to protect rural areas poses a long-term risk to the security of UK food production, as a high proportion of the most valuable agricultural land is at risk of flooding.”

“We need a response from government that recognises the importance for our long-term food security of safeguarding high-quality farmland,” said Neil Sinden of the Campaign to Protect Rural England. “We need to view the countryside as more than a place for building, and value it for the food it provides.”

Defra has estimated that 35,000 hectares of high-quality horticultural and arable land will be flooded at least once every three years by the 2020s. This could rise to around 130,000 hectares by the 2080s if there is no change to current flood defence provision.

Peter Kendall, chairman of the National Farmers Union, which has produced evidence showing that 58% of England’s most productive farmland lies within a floodplain, said the floods were a wake-up call for a country that has “believed for too long that producing food wasn’t a big issue”.

“We are seeing more of these intense extreme weather events,” Kendall said. “Climate change does now really challenge mankind’s ability to feed itself.“

Urgent and fundamental changes are needed in the way the country is adapting to the risk of flooding, which is an ever-increasing reality because of the impact of climate change, the final report into last summer’s floods has concluded.

Sir Michael Pitt, who was asked by ministers to carry out an independent review of the June and July floods, examined more than 1,000 written submissions in putting together his report.

As part of a plan of action for the next two years, Pitt found that the government must be held to account on improving the country’s flood resilience. Much more needs to be done to avoid a repeat of the devastation across Yorkshire, Humberside, the Midlands and the West Country, which left 13 people dead and caused damage worth £3bn, he said.

A major winter storm affected northern areas on December 5th but otherwise the weather was quiet until mid-month. However, from mid-December to early January, a rapid succession of deep low pressure systems brought exceptionally stormy and wet conditions to the UK, with winds often gusting at 60 to 70 mph and persistent heavy rain. Although the worst of the storms then eased, unsettled and very wet weather continued until the end of January. During January, coastal flooding affected exposed southern and western coasts, while large swathes of the Somerset Levels remained under floodwater for most of the month. The westerly weather type meant that conditions were mild, with snowfalls confined to the Scottish mountains.

Mean temperatures over the UK were well above the long-term average during both December (anomaly + 1.8 °C) and January (anomaly + 1.1 °C), and there was a notable absence of frosts. December was particularly mild across Scotland, and it was the mildest December since 1988 for the UK.

Despite the wet weather, much of central and south-east England was sunnier than average in both December and January. However, western and northern areas were rather dull.

Will the recent UK flooding help to spur meaningful climate actions? More delay means more weather extremes, hence less energy and food security. Meanwhile, UK flooding: week of storms ahead – “West Country completely cut off by rail and forecasters say current conditions likely to prevail until next weekend.” and Storms to batter flood-hit Britain – “LARGE swathes of England and Wales are on flood alert as yet another storm with winds of up to 112km/h arrives to batter Britain.” and Robert Scribbler “British Isles Endure Endless Barrage of Storms: North Atlantic Riled By Human Warming Forecast to Assault UK With At Least Three More Powerful Cyclones Over Next 7 Days”

the mini iceage of history was caused by the sun and its reaching a solar
minimum again. to blame this on mankind and co2 emissions is a deception

Most of south England will be under water within a year, the jet stream is
very stubborn, they said maybe the flooding will end by may, I dont think
so, more like MAYbe not

[…] would say in USA……'Enough Already !!!! This link tries to explain it, but it doesn't help. UK Flooding and the Science of Climate Change | ClimateState Oh well……stiff upper lip and all that…. Attached Thumbnails     […]

UK Floods 2014 Could Last for Months + 1.6M Homes at Risk for Flooding | ClimateState

[…] UK Flooding and the Science of Climate Change […]

Welcome to the new paradigm…