You are here:
2021Extreme WeatherFloodImpactsPrecipitationUSA 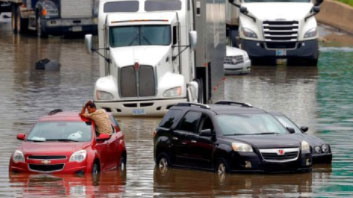 Flash flooding inundated many freeways in the Detroit metro area on Saturday, with more rain in the forecast. Heavy rains leave 1,000 cars underwater in Detroit. There is also a tornado watch in the region.

CBS News: Michigan Governor Gretchen Whitmer on Saturday declared a state of emergency in response to heavy rainfall in the state that has resulted in power outages, flooding, and sewer backups.

Gary Brown, director of the Detroit Water and Sewage Department, said that the city’s sewage operation system is at maximum capacity and that additional heavy rain could result in even more backups.

“The intensity of these storms exceeded the design standard for pump stations and combined sewer overflow facilities,” he said at a press conference Saturday. “With this much rain, there is nowhere for the water to go other than flooding streets and basements.”

He called for “more resilient” infrastructure to address weather changes, and said that these storms are “another example of global warming.”

More than 46,000 residents in the state are without power as of Saturday afternoon, according to PowerOutage.US, a national tracking system that aggregates live power outages. Whitmer said in a video posted to Twitter that she has been in touch with utility providers to get services back.

Up to seven inches of rain fell early on Saturday, causing the flash flooding of highways mainly in the Detroit metro area, and in Wayne County, Michigan. Hundreds of vehicles were stranded, prompting the rescue of about 50 drivers.

More rains are expected for the coming six days

The Detroit region is expected to get even more rain in the coming days, and even has tornado warnings.

The Detroit News: Multiple tornadoes reportedly touched down in mid-Michigan Saturday and warnings for several other counties went into effect ahead of a night that threatened with more rain to already overwhelmed streets and roadways in Metro Detroit.

Pakistan Floods: Hundreds dead and millions are without shelter
August 26, 2022
Subscribe
0 Comments
Inline Feedbacks
View all comments
Go to Top
wpDiscuz
0
0
Would love your thoughts, please comment.x
()
x
| Reply
Cookie Consent
To provide the best experiences, we use technologies like cookies to store and/or access device information. Consenting to these technologies will allow us to process data such as browsing behavior or unique IDs on this site. Not consenting or withdrawing consent, may adversely affect certain features and functions. Learn more about the data usage on this website.
Manage options Manage services Manage vendors Read more about these purposes
View preferences
{title} {title} {title}
Loading Comments...