You are here:
Extreme WeatherMeteorologyPrecipitationStorms 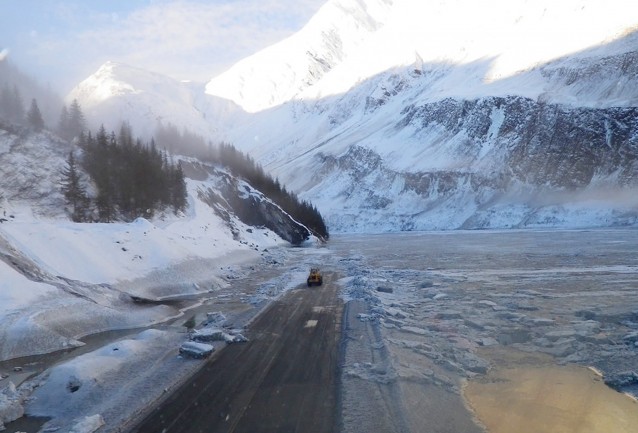 By Ryan Koronowski (Think Progress): It’s easy to forget about other places in the world, or even in your own country, when you’re out shoveling snow, or people who are homeless suffer the worst of urban cold snaps, or harbor seals on the Hudson River ride ice floes, or your city shuts down due to amismanaged winter storm.

The polar vortex, normally tucked away much closer to the Arctic, has swept down several times this winter, bringing cold temperatures and snow to large segments of the U.S. east of the Rockies. Many experience this and either forget or doubt what the data show: that 2013 was the fourth-hottest year on record (or second-hottest without an El Niño), that greenhouse gas emissions are causing the atmosphere to trap more heat, that climate change is a problem.

But not only is this cold not unprecedented — it’s not even happening most places.

Courtesy of Climate Central, a look at historical frigid cold periods in some of the U.S. cities that are in a deep freeze this winter shows that the number of frigid nights have seen a steady decline over the last few decades. The polar vortex pulled thermometers below zero and prompted fears that the Super Bowl would be paralyzed by snow and frigid temperatures. In the end, the game was 49 degrees at kickoff, making it only the third-coldest Super Bowl ever — Seattle and Denver were actually colder than it was in the Meadowlands. The University of Maine’s Climate Reanalyzer shows how this cold has moved south, leaving the Arctic much warmer than normal, and parts of North America colder than normal as of Saturday.

Why the displaced cold? The polar vortex has been pulled south by an unusually extreme jet stream, which some scientists have suggested will happen more frequently in a warming world. This leaves the far north much warmer than normal. Consider Alaska.

Richardson Highway, the only road that connects the Alaskan port town of Valdez with the rest of civilization, suffered a series of a dozen avalanches that buried the road 40 feet deep and hundreds of feet long last month (video here). Valdez City Manager John Hozey told NPR“there are slides there every year but not like this”:

What happened was we had really unusual weather. When it got really cold down there in the Lower 48, it got really warm up here and it actually started to rain. Temperatures at the tops of the mountains were approaching high 40s, even 50 degrees, and rain. That just destabilized the snowpack that’s there every year. And people who’ve lived here for 30, 40 years say they’ve never seen a slide like that.

The warm weather that buried the road to Valdez is emblematic of the unseasonably hot weather that blanketed Alaska while cold moved down to the Lower 48 in January. Port Alsworth, Alaska hit 62°F (16.7°C) on January 27, which tied the all-time warmest January temperature for the state. Many other towns set records, as much as 40°F (22°C) above normal. Nome hit 48°F, a record high, and more likely to be seen in late May. A National Weather Service statement said that temperatures in Fairbanks fell below normal only four days in the month of January. The average high temperature at Faribanks Airport was 16.4°F — much warmer than the normal high of 1.1°F.

This map shows how much warmer different parts of Alaska were during the last week of January — red signifies 18°C warmer than the 2001-2010 average for the same week.

This map depicts land surface temperature anomalies in Alaska for January 23–30, 2014. Based on data from the Moderate Resolution Imaging Spectroradiometer (MODIS) on NASA’s Terra satellite, the map shows how 2014 temperatures compared to the 2001–2010 average for the same week. Areas with warmer than average temperatures are shown in red; near-normal temperatures are white; and areas that were cooler than the base period are blue. CREDIT: NASA EARTH OBSERVATORY

It wasn’t just Alaska. Greenland has been about 5°C warmer than normal in January.

The Lower 48 have not all been in a deep freeze, either. California ski resorts are hoping they can get through another winter of extremes — this year with unseasonably warm temperatures and some of the lowest snowpack levels on record as drought grips the Golden State. Many ski resorts have invested millions in snowmaking equipment and are now offering sales and deals to try to stay afloat. Snow season has shrunk in the northern hemisphere by about three weeks, leaving the people who plan Winter Olympics grappling with how to adapt. In Sochi, this has involved a year-long effort to stockpile and manufacture snow.

For people in the Northern Hemisphere, it’s easy to forget it’s summer in the Southern Hemisphere, where many countries have seen extreme heat. Sao Paolo, Brazil is running out of water as it suffered through its hottest month on record in January. The extreme heat rolling through Australia has not just caused tennis tournaments to suspend outdoor play, but also led to a spike in heat-related deaths in Victoria.

These extremes can make climate change difficult to understand — and it’s why looking at warming trends over the years is much more useful to understand what’s going on:

Major Rivers Drying up all over the World
August 17, 2022
Subscribe
0 Comments
Inline Feedbacks
View all comments
Go to Top
wpDiscuz
0
0
Would love your thoughts, please comment.x
()
x
| Reply
Cookie Consent
To provide the best experiences, we use technologies like cookies to store and/or access device information. Consenting to these technologies will allow us to process data such as browsing behavior or unique IDs on this site. Not consenting or withdrawing consent, may adversely affect certain features and functions. Learn more about the data usage on this website.
Manage options Manage services Manage vendors Read more about these purposes
View preferences
{title} {title} {title}
Loading Comments...