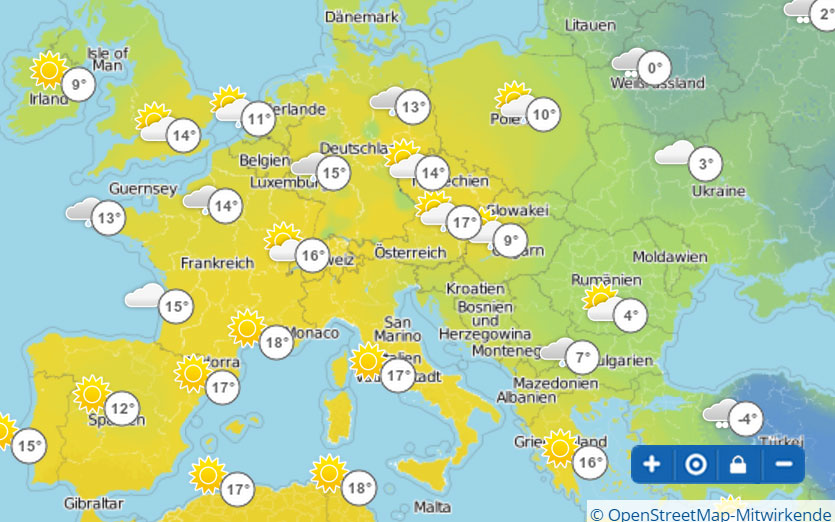 2015 takes off with temperatures for parts of Europe hovering around 17C. And The Guardian warned of 100mph gale-force winds and snow to batter the UK. Temperatures in Germany spring like with meteorologists forecasting 17C in Germany Salzburg or in Wien Austria, for tomorrow the 10th of January 2015.

Ironically, the ski resort Allgäu tries to make an impression in above image screen capture – of a snowy landscape. There was no snow around the 16th of December in parts like Allgäu (Schneemangel im Allgäu) or Austria, then to much around the 29th of December 2014, resulting in the postponing of the World Cup Ski Jumping 2014 and traffic chaos, or as some headlines summed it up: “Ski resorts in French Alps switch on snow-making machines to cover bare slopes as region prepares for blizzard that will dump up to 30 INCHES of snow”. And now the current spring like temperatures will eventually melt the snow which accumulated in the past two weeks.

Exceptional mild winter temperatures are weather, however when weather data is plotted over decade timescales one can get the climatic trends.

An article in The Guardian focusing on the climatic conditions, from 2013 concluded: “The Alps are warming, the evidence of climate change is clear and the golden years of ski tourism will soon be past”. A small excerpt from that article reads:

Some interpreters of the graph have argued that the temperature rise was due to the town’s growth, so researchers looked at average temperatures at the Swiss peak of Jungfrau, at an altitude of 3,800m. They found the same results, said Brunot.

“We are finding the same rises in temperature in the high mountains, showing it is not linked to conglomerations. This is much more than the overall average change in the planet of around 0.75C. It is true that the average is worked out including the water covering the Earth, and of course the sea warms up less than the continents, but it is still very high.

“We are also seeing less snow in lower lying areas of under 1,000m. Around 40% less over the last 50 years. At higher altitudes 2,000m and above there is no evolution. The level at which precipitation turns from snow to rain appears to have risen by 200m.”

Brunot clicked up another graph of snowfall at under 1,000m altitude in the Alps. The slope is gentle but testifies to a clear decline. “What this evidence shows is that since the 1990s there has been a rapid rise in temperatures in the mountains and since the 1960s there has been a slower, but evident, trend of less snow at lower altitudes,” he said.

Britain is bracing itself for a double battering as gale-force winds stirred up by a 250mph jet stream strike – followed by snow.

The very stormy weather has sparked fears that trees could be uprooted and travel and power lines damaged as forecasters warned of winds as strong as those which caused widespread damage in 2013.

The ferocious gales have been stirred up by an extra-powerful jet stream triggered by plunging temperatures in the US hitting warmer air in the south.

Forecasters said the 250mph jet stream will bring two “vigorous depressions” to the UK over the coming days.

It will hit Britain on Thursday night, lashing the north of Scotland with 100mph winds – strong enough to damage buildings. The Met Office has issued an amber warning, telling people to “be prepared”.

The rest of Scotland has been issued with a yellow Met Office warning as gusts of up to 70mph are forecast.

England, Wales and Northern Ireland are also set to be hit with strong winds of up 60mph.

Met Office forecaster Calum MacColl said: “It is going to bring some very windy conditions indeed pushing in. There will be some damaging winds – very severe.

And hot on its heels Britain will be hit by another storm with more weather warnings issued for Saturday amid predictions of further gale-force winds.

But MacColl said despite the storms temperatures will be “exceptionally mild for that time of year” – widely hovering at 14C to 15C.

Teaser image via wetter.de, Europe map for the 10th of January 2015.

Incredible 21.7C recorded in Austria Obervellach today the 10th January 2015, a new temperature record and the Zentralanstalt für Meteorologie und Geodynamik (ZAMG) reported the warmest January day ever measured in Austria. The previous record was set back in  January 29th, 2002 with 20.6C.