You are here:
2014Extreme WeatherImpactsPrecipitationStormsUK 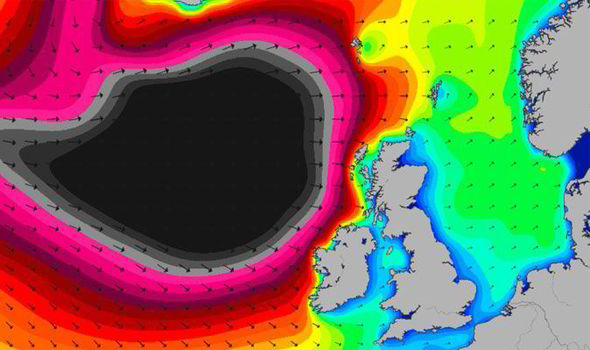 So almost 1 year ago the Scotland and English coast saw extreme stormy weather, with winds gusting up to 80 mph (BBC reported). Now warnings have been issued by weather services:

STV.TV: Forecasters have warned of disruption to ferry travel as winds hit speeds of up to 80mph in the north west of Scotland.

BBC: Ferry and rail services in Scotland have been cancelled as winds strengthen ahead of an Atlantic storm that is due to hit the UK later.

STORM OF CENTURY: Britain to be smashed by hurricane-force wind and blizzards from TONIGHT

Translation: North Atlantic storm with hurricane force winds, forecasters expect waves with up to a height of 20-meters. Parts of the storm are expected to hit Germany.

These were major winter storms, but considered individually there are examples of comparable or more severe storms in recent years. Examples would include 3 January 2012 and 8 December 2011, each of which caused widespread impacts. However, it was the rapid succession of storms that made the spell exceptional.

The figure below shows the count of stations for Decembers from 1969 exceeding 60 kt, and show that December 2013 was the stormiest December in this series. In recent years, December 2011 was also a stormy month, particularly across Scotland. December 2010 and 2009 were cold months (December 2010 exceptionally so) and characterised by blocked weather patterns, with an absence of storms.

and in the follow up report Winter storms, January to February 2014, the Met Office noted:

The UK experienced a spell of extreme weather from late January to mid-February as a succession of major storms brought widespread impacts and damage to the UK.

Around 6 major storms hit through this period, separated by intervals of 2 to 3 days. The sequence of storms followed an earlier stormy period from mid-December 2013 to early January 2014. Taken individually, the first two storms were notable but not exceptional for the winter period. However, the later storms from early to mid-February were much more severe. Overall, the period from mid-December 2013 to mid-February 2014 saw at least 12 major winter storms, and, when considered overall, this was the stormiest period of weather the UK has experienced for at least 20 years.

For the England and Wales precipitation series (EWP), the January rainfall total was 185 mm making this the wettest January in the series from 1766, just ahead of January 1948 (177 mm), and there were more days of rain for the UK in January 2014 than for any other month in a series from 1961.

Is this the repeat of the 2013 Winter storm season?

Concerning the climate, questions include how and if changes in the Jet Stream or sea ice distribution affect wintry European weather and how much coastal defenses and flooding plans are prepared to cope with such situations.

What Is This “Atmospheric River” That Is Flooding California? http://blogs.scientificamerican.com/observations/2014/12/11/what-is-this-atmospheric-river-that-is-flooding-california/
What may be California’s biggest storm since 2009 on its way http://mashable.com/2014/12/09/biggest-storm-since-2009-california/
Winds and wave warning as ‘weather bomb’ hits Scotland http://www.bbc.com/news/uk-scotland-30402293
Dec 11, California Braces for Rain, Snow and High Winds in Worst Storm in Five Years http://www.nbcnews.com/news/weather/california-braces-rain-snow-high-winds-worst-storm-five-years-n266121

Pakistan Floods: Hundreds dead and millions are without shelter
August 26, 2022
Subscribe
0 Comments
Inline Feedbacks
View all comments
Go to Top
wpDiscuz
0
0
Would love your thoughts, please comment.x
()
x
| Reply
Cookie Consent
To provide the best experiences, we use technologies like cookies to store and/or access device information. Consenting to these technologies will allow us to process data such as browsing behavior or unique IDs on this site. Not consenting or withdrawing consent, may adversely affect certain features and functions. Learn more about the data usage on this website.
Manage options Manage services Manage vendors Read more about these purposes
View preferences
{title} {title} {title}
Loading Comments...