In Much of U.S., Extreme Cold is Becoming More Rare 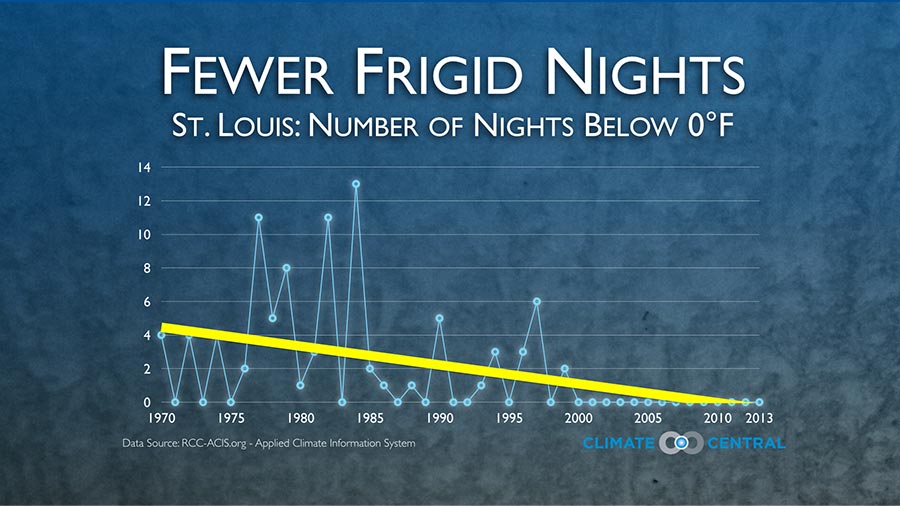 The deep freeze that continues to affect the U.S. has resulted in numerous daily temperature records, and some all-time cold temperature records. But in general, this Arctic outbreak, courtesy of a huge chunk of the polar vortex that the jet stream temporarily dislodged from the Arctic, is bringing the coldest temperatures in 20 to 30 years to many areas of the Midwest, Ohio Valley, Deep South, and the eastern seaboard.

Some of the most severe cold has affected the Midwest, from Minnesota to Illinois and east to Michigan. Chicago set a record for the 7th coldest noontime temperature since 1930, with a temperature of just -14°F at midday on Monday. But the city did not set any all-time cold records.

While the cold temperatures have been unusual and even deadly, climate data shows that intense cold such as this event is now occurring far less frequently in the continental U.S. than it used to. This is largely related to winter warming trends due to manmade global warming and natural climate variabiility.

Climate Central calculated the number of nights below a specific temperature threshold for dozens of U.S. cities based on the local climatology and current weather conditions. The calculations encompass the entire winter season, and show that overall there is a downward trend in the number of extreme cold nights like we’re currently experiencing – although there are variations in a few cities. This trend is consistent with climate studies showing that overall, winters across the contiguous U.S. have warmed by .61°F per decade since 1970, and every region has warmed at least somewhat over that time.