You are here:
2013CryosphereGlaciologyIce Sheets 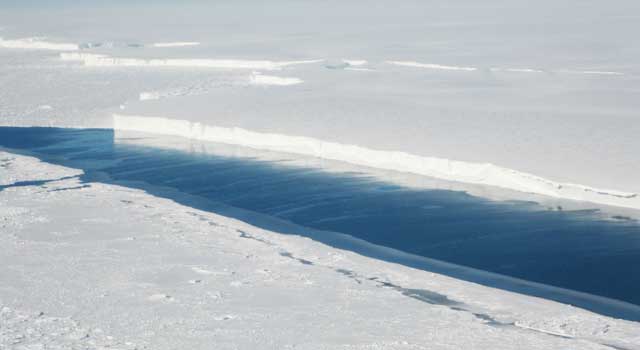 Livescience: When iceberg chunks break off of floating ice shelves, it can serve as dramatic proof of melting — and this traditionally has been considered the main way that these expanses of Antarctic ice become smaller. But new research reveals a disconcerting finding that is invisible to the naked eye: These ice shelves primarily melt from below.

Knowing what is driving ice-shelf melt is important because when ice shelves lose mass, they speed up the flow of land-bound glaciers that feed them, moving ice from the continent to the ocean, and contributing to global sea level rise.

The study, published today (June 13) in the journal Science, found that on average, Antarctica’s ice shelves are thinning by about 1.6 feet (50 centimeters) per year. But some of them are thinning much more quickly, by as much as 328 feet (100 meters) annually, said Eric Rignot, a study co-author and researcher at the University of California, Irvine. [Album: Stunning Photos of Antarctic Ice]

This photo shows the ice front of Venable Ice Shelf, West Antarctica, in October 2008. It is an example of a small-size ice shelf that is a large melt water producer. The image was taken onboard the Chilean Navy P3 aircraft during the NASA/Centro de Estudios Cientificos, Chile campaign of Fall 2008 in Antarctica. Image credit: NASA/JPL-Caltech/UC Irvine

“These changes are faster and larger than anything people anticipated,” Rignot told LiveScience’s OurAmazingPlanet.

Ice shelves are formed when glaciers meet the ocean and begin flowing out to sea. Ultimately, their mass comes from snow that falls on top, which becomes compacted to form frozen water. Right now, however, the continent’s glaciers are losing mass two to three times faster than it’s being replenished, Rignot said.

Ice melts when the ocean water beneath it warms sufficiently. In this case, Rignot suspects that the melting isn’t driven primarily by the gradual warming of ocean water due to climate change, but rather by a change in ocean circulation that is bringing up warmer water from offshore. Generally, atmospheric warming in the Southern Hemisphere has led to slightly stronger “zonal” winds that whip clockwise around Antarctica. And this, at least in certain areas, has pushed cold surface waters away from the continent, allowing slightly warmer water to rise to the surface and melt ice shelves, Rignot said.

This phenomenon may have helped melt the Larsen B Ice Shelf, most of which collapsed in 2002. Now, the glaciers that were slowed by the shelf’s enormous mass have sped up, flowing to sea up to eight times faster than previously, Rignot said. If all the ice shelves were entirely removed, glacier speeds would increase by up to tenfold on average, he added.

However, exactly why the water beneath certain ice shelves has warmed remains a matter of debate. The main problem is a lack of data in certain areas — imagine the difficulty of obtaining measurements beneath skyscraper-thick ice in Antarctica — as well as a short record of accurate measurements, Rignot said.

This is the first “comprehensive estimate of all Antarctic ice-shelf melting and calving,” said Paul Holland, a researcher at the British Antarctic Survey who wasn’t involved in the study. Due to the large amount of data that went into the study, it took nearly a decade to complete, Rignot said.

Rignot and his co-authors calculated the mass of ice shelves with satellites and airplane radar readings that can penetrate ice and tell how thick it is. They also used data from NASA’s IceBridge mission, a six-year campaign to survey and monitor Earth’s polar ice sheet. The scientists calculated snowfall by using computer models that show the flux of moisture from the atmosphere to the ground. By combining these data, the scientists figured out “what fraction of Antarctic glacial ice is lost through icebergs, and what is lost through ocean melting,” Holland said.

Even though most of Antarctica’s ice shelves “haven’t changed much,” there are a few hot spots that have seen dramatic change and that have added significantly to global sea level rise, Rignot said. Small changes, however — like the slight increase in zonal winds — can cause major changes in the ice system. “It’s a sensitive system,” Rignot said.

A schematic of ice shelves melting in Antarctica. The size of the pie wedge is proportional to the mass of ice lost. Black represents loss through bottom melt; white-stripes from iceberg calving. Red shows ice shelves that are freezing on bottom; blue areas are melting.
CREDIT: Eric Rignot et al / Science

Jet Propulsion Laboratory – June 13, 2013 PASADENA, Calif. — Ocean waters melting the undersides of Antarctic ice shelves are responsible for most of the continent’s ice shelf mass loss, a new study by NASA and university researchers has found.

Antarctica holds about 60 percent of the planet’s fresh water locked into its massive ice sheet. Ice shelves buttress the glaciers behind them, modulating the speed at which these rivers of ice flow into the ocean. Determining how ice shelves melt will help scientists improve projections of how the Antarctic ice sheet will respond to a warming ocean and contribute to sea level rise. It also will improve global models of ocean circulation by providing a better estimate of the amount of fresh water ice shelf melting adds to Antarctic coastal waters.

The study uses reconstructions of ice accumulation, satellite and aircraft readings of ice thickness, and changes in elevation and ice velocity to determine how fast ice shelves melt and compare the mass lost with the amount released by the calving, or splitting, of icebergs.

“The traditional view on Antarctic mass loss is it is almost entirely controlled by iceberg calving,” said Eric Rignot of NASA’s Jet Propulsion Laboratory in Pasadena, Calif., and the University of California, Irvine. Rignot is lead author of the study to be published in the June 14 issue of the journal Science. “Our study shows melting from below by the ocean waters is larger, and this should change our perspective on the evolution of the ice sheet in a warming climate.”

This photo shows the ice front of the ice shelf in front of Pine Island Glacier, a major glacier system of West Antarctica. The image was taken during the NASA/Centro de Estudios Cientificos, Chile (CECS) Antarctic campaign of Fall 2002. Image credit: NASA/JPL-Caltech/UC Irvine

Ice shelves grow through a combination of land ice flowing to the sea and snow accumulating on their surface. To determine how much ice and snowfall enters a specific ice shelf and how much makes it to an iceberg, where it may split off, the research team used a regional climate model for snow accumulation and combined the results with ice velocity data from satellites, ice shelf thickness measurements from NASA’s Operation IceBridge — a continuing aerial survey of Earth’s poles — and a new map of Antarctica’s bedrock. Using this information, Rignot and colleagues were able to deduce whether the ice shelf was losing mass through basal melting or gaining it through the basal freezing of seawater.

Basal melt can have a greater impact on ocean circulation than glacier calving. Icebergs slowly release melt water as they drift away from the continent. But strong melting near deep grounding lines, where glaciers lose their grip on the seafloor and start floating as ice shelves, discharges large quantities of fresher, lighter water near the Antarctic coastline. This lower-density water does not mix and sink as readily as colder, saltier water, and may be changing the rate of bottom water renewal.

“Changes in basal melting are helping to change the properties of Antarctic bottom water, which is one component of the ocean’s overturning circulation,” said author Stan Jacobs, an oceanographer at Columbia University’s Lamont-Doherty Earth Observatory in Palisades, N.Y. “In some areas it also impacts ecosystems by driving coastal upwelling, which brings up micronutrients like iron that fuel persistent plankton blooms in the summer.”

The study found basal melting is distributed unevenly around the continent. The three giant ice shelves of Ross, Filchner and Ronne, which make up two-thirds of the total Antarctic ice shelf area, accounted for only 15 percent of basal melting. Meanwhile, fewer than a dozen small ice shelves floating on “warm” waters (seawater only a few degrees above the freezing point) produced half of the total melt water during the same period. The scientists detected a similar high rate of basal melting under six small ice shelves along East Antarctica, a region not as well known because of a scarcity of measurements.

The researchers also compared the rates at which the ice shelves are shedding ice to the speed at which the continent itself is losing mass and found that, on average, ice shelves lost mass twice as fast as the Antarctic ice sheet did during the study period.

“Ice shelf melt doesn’t necessarily mean an ice shelf is decaying; it can be compensated by the ice flow from the continent,” Rignot said. “But in a number of places around Antarctica, ice shelves are melting too fast, and a consequence of that is glaciers and the entire continent are changing as well.”

Imagery related to this release is online at: http://www.nasa.gov/topics/earth/features/earth20130613.html.

[…] from scraping over rocks, can melt ice at the base, a factor that's forced upward revisions of the rate of ice loss from global warming. In Greenland it's the process of being squeezed up the walls of valleys that reduces the pressure […]