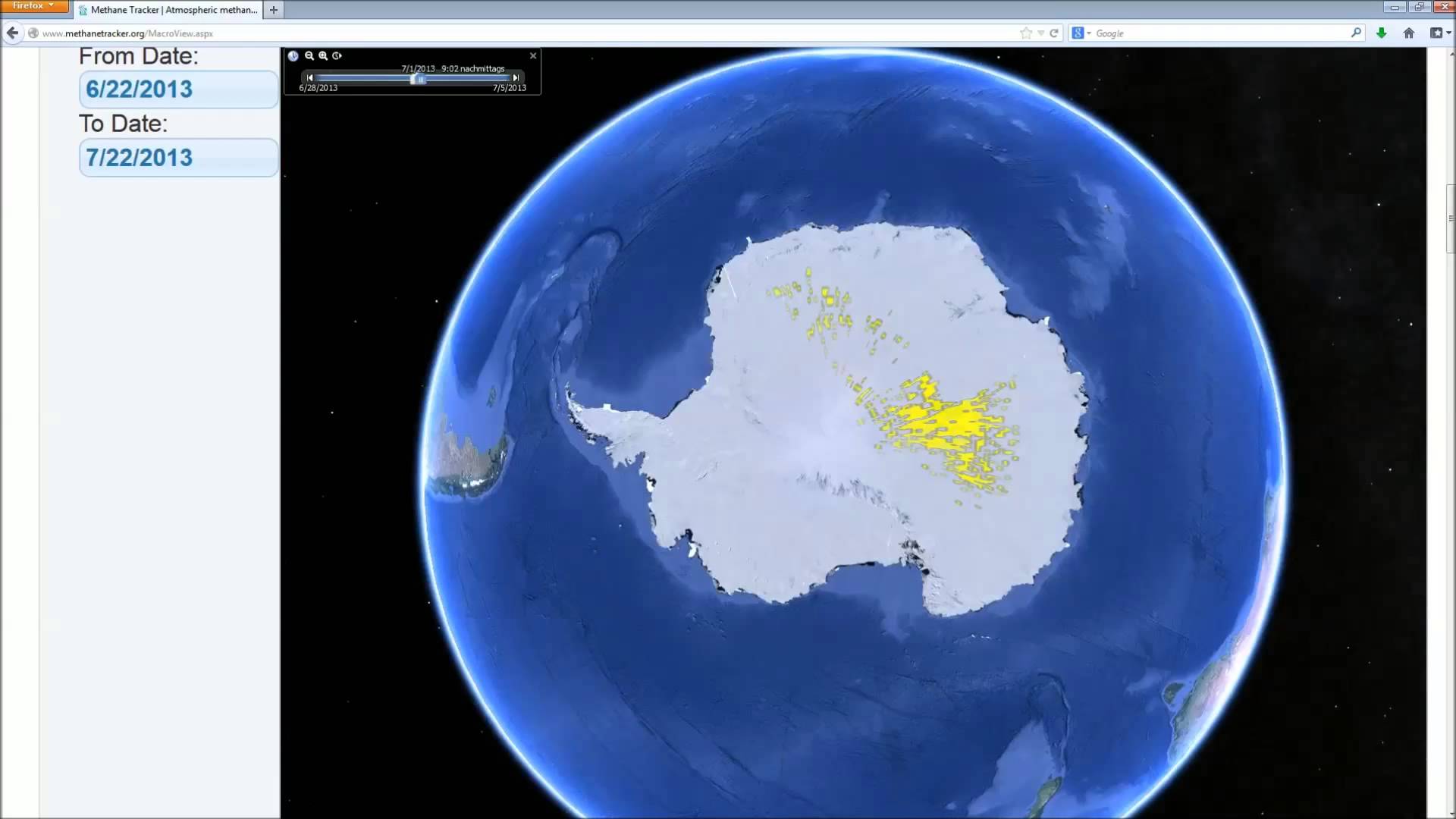 METOP-2 imagery reveals that there is a significant area of high methane concentration over Antarctica.

A study paper from 2012 reported that as glaciers melt, gas could belch into atmosphere.

Potential Methane Reservoirs Beneath AntarcticaAug. 29, 2012 — The Antarctic Ice Sheet could be an overlooked but important source of methane, a potent greenhouse gas, according to research published August 29 in Nature and conducted by an international team led by Professor Jemma Wadham from the University of Bristol’s School of Geographical Sciences. Team leader, Professor Wadham said: “This is an immense amount of organic carbon, more than ten times the size of carbon stocks in northern permafrost regions. Our laboratory experiments tell us that these sub-ice environments are also biologically active, meaning that this organic carbon is probably being metabolised to carbon dioxide and methane gas by microbes.”

They also calculated that the potential amount of methane hydrate and free methane gas beneath the Antarctic Ice Sheet could be up to 400 billion tonnes (that is, 400 Pg of carbon), a similar order of magnitude to some estimates made for Arctic permafrost. The predicted shallow depth of these potential reserves also makes them more susceptible to climate forcing than other methane hydrate reserves on Earth.

Dr Sandra Arndt, a NERC fellow at the University of Bristol who conducted the numerical modelling, said: “It’s not surprising that you might expect to find significant amounts of methane hydrate trapped beneath the ice sheet. Just like in sub-seafloor sediments, it is cold and pressures are high which are important conditions for methane hydrate formation.”Source

Are these methane readings through perforations in the rocky to ice layer on higher elevations?

Research in 2008 in the Siberian Arctic has shown clathrate-derived methane being released through perforations in the seabed permafrost. Source

Leonid Yurganov · LGU “Antarctic methane? It is impossible for the Antarctic continent. AIRS receive radiation in IR, that is coming from the upper troposphere or even stratosphere in that region. It is unsensitive to the very cold surface of the ice dome.”

Katabatic winds blow outward from the surface of the Antarctic; implies that atmosphere from the Antarctic perimeter must be drawing into the upper Antarctic troposphere Image provided by AbruptSLR

In a few regions of continental Antarctica the snow is scoured away by the force of the katabatic winds, leading to “dry valleys” (or “Antarctic oasis“) such as the McMurdo Dry Valleys. Since the katabatic winds are descending, they tend to have a low relative humidity which desiccates the region. Other regions may have a similar but lesser effect, leading to “blue ice” areas where the snow is removed and the surface ice evaporates, but is replenished by glacier flow from upstream. Source

AbruptSLR: “Methane may be venting from marine methane hydrates near the Kerguelen Plateau, but additionally from many other Antarctic continental shelves (all around the continent) where warm CDW is intruding on to the continental shelves (particularly in to troughs on the continental shelves). Such dispersed methane emissions would be difficult to see at sea level by satellite; but when accumulated higher up (from about 400 mb to 600 mb) over the East Antarctic by the concave shape of the atmospheric geopotential height caused by the ozone hole and local GHG (including the methane) over Antarctica. As I have noted in prior posts, I believe that the cold temperatures and the increasing formation of ice crystals in the atmosphere high over Antarctica reduces the rate of oxidation of the methane, thus allowing lower concentrations to accumulate, just as they do in the Arctic.” Source

Omar:”I thought the methane release could have happened on subsea clathrates and winds could have pushed the methane inland, but it seems odd for methane to flow against the wind direction consistently for two months, and, most importantly, there’s no methane whatsoever detected at sea level 800hPa+…

The detected methane really seems to be consistent starting at around 650hPa to 670hPa. At the current temperatures in Antarctica of -58F and dewpoint of -64F the elevation would be approximately 1600 to 1900 meters; and the highest levels of methane are found at 586 hPa / around 3000 meters.

What I’m about to say sounds like nosense even to a noob like me, but could it be possible that there are deep fractures in the East Antarctic Ice Sheet that are causing extensive methane venting? After all, the area where the methane is being detected seems to follow pretty much the elevation of the area.” Source

Via Sam Carana’s blog, Albert Kallio: (1) Theoretically, it could be a result of melt water percolation through Antarctic ice sheet to its base, and then, thawing the permafrost soil beneath the ice sheet.

While the East Antarctic ice accumulates weight, the West Antarctic ice loses its weight due to ablation (melting). As the fluids both in the Asthenosphere and the crust are incompressible, the changing fluid pressure of one channels from one to the other via the subterranean fluid conduits. These can consist both hot magma and water which transports heat from deep towards the surface. Source

Identification and control of subglacial water networks under Dome A, Antarctica

Subglacial water in continental Antarctica forms by melting of basal ice due to geothermal or frictional heating. Subglacial networks transport the water from melting areas and can facilitate sliding by the ice sheet over its bed. Subglacial water flow is driven mainly by gradients in overburden pressure and bed elevation. We identify small (median 850 m) water bodies within the Gamburtsev Subglacial Mountains in East Antarctica organized into long (20-103 km) coherent drainage networks using a dense (5 km) grid of airborne radar data. The individual water bodies are smaller on average than the water bodies contained in existing inventories of Antarctic subglacial water and most are smaller than the mean ice thickness of 2.5 km, reflecting a focusing of basal water by rugged topography. The water system in the Gamburtsev Subglacial Mountains reoccupies a system of alpine overdeepenings created by valley glaciers in the early growth phase of the East Antarctic Ice Sheet. The networks follow valley floors either uphill or downhill depending on the gradient of the ice sheet surface. In cases where the networks follow valley floors uphill they terminate in or near plumes of freeze-on ice, indicating source to sink transport within the basal hydrologic system. Because the ice surface determines drainage direction within the bed-constrained network, the system is bed-routed but surface-directed. Along-flow variability in the structure of the freeze-on plumes suggests variability in the networks on long (10s of ka) timescales, possibly indicating changes in the basal thermal state.

sg_smith: “It is interesting that the methane anomalies are coming from and or near the area with the coldest (-10) degrees. I thought they would be from the warmest areas.” Source

Asthenosphere is a portion of the upper layer of the mantle just below the lithosphere that is involved in plate tectonic movement and isostatic adjustments.

Migration of methane sulphonate in Antarctic firn and ice

What Do Methane Deposits In The Antarctic And Arctic Mean For The Climate?

Reaction of Ozone and Climate to Increasing Stratospheric Water Vapor