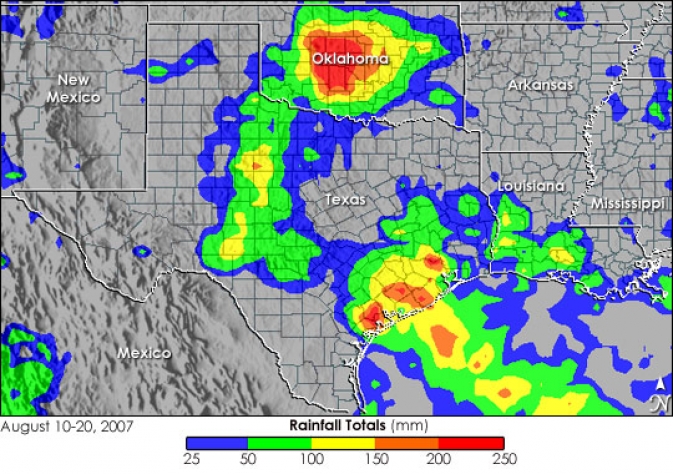 Tropical storms and hurricanes are driven by energy and momentum derived from warm ocean waters of at least 26.5°C. The warmer the ocean, the more energy is available to the storm, and the more intense it is likely to become. Ordinarily, these storms lose energy after making landfall, as they move beyond the ocean as their source of heat energy. However, in 2007 this conventional wisdom was brought into question when meteorologists were stumped by Tropical Storm Erin.

As tropical storm Erin tracked over Texas, something unusual occurred: it grew stronger over land than it ever had while over the Gulf of Mexico, even forming a hurricane-like eye over the state of Oklahoma. The phenomenon came to called “The Brown Ocean Effect” — and describes storms which derrive their energy over land, after moving ashore. Storms fed by the Brown Ocean Effect get their energy from the evaporation of abundant soil moisture. The land essentially mimics the moisture-rich environment of the ocean, where the storm originated.

According to NASA-funded research by Theresa Andersen and J. Marshall Shepherd of the University of Georgia in Athens, tropical storm Erin is an example of the newly-described Brown Ocean Effect, and has given rise to a new sub-category of tropical storm type called “Tropical Cyclone Maintenance and Intensification Event,” or TCMI.

The finding has possible implications for the response of storms to climate change. As average surface temperatures rise, and as precipitation events increase in frequency and severity, more moisture is retained and then released from extremely wet soils. This, together with warmer air in vulnerable regions, supports the environmental conditions for the persistence of tropical storms well beyond their ocean birthplace.

Recently in June 2015, Tropical Storm Bill brought isolated rainfall totals of more than a foot to the Texas/Oklahoma border area, and was likely impacted by the Brown Ocean Effect. Conditions sustained a Tropical Depression much longer than expected, in total for 78 hours after landfall. Average post-landfall lifespan of 131 inland tropical cyclones since 1970 was just 36 hours, only 12 of those systems lasted 78 hours.

Kevin Trenberth from the National Center for Atmospheric Research concluded in 2012, “Empirical evidence confirms that warmer climates, owing to increased water vapor, lead to more intense precipitation events, even when the total annual precipitation is reduced slightly. A warmer climate therefore increases the risks of floods.”

Tropical storms therefore could be sustained by more favorable conditions with moisture-rich soils over land. Thus, may track further and further inland, and communities previously out of reach of tropical storms and hurricanes may become more vulnerable to damaging winds and heavy precipitation they generate.

How do tropical cyclones form ? http://www.aoml.noaa.gov/hrd/tcfaq/A15.html