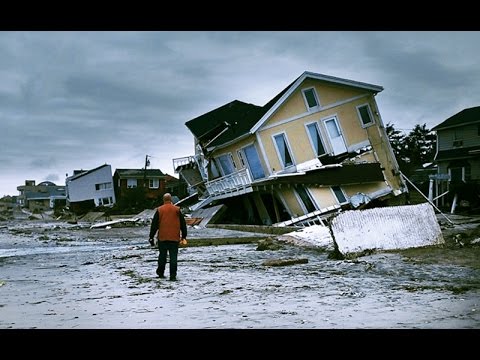 According to a new study, sea level rise of several meters might happen faster then previously thought. Based on data from past climate changes, when sea level rose to +5–9 m, including the occurrence of extreme storms – during a time when temperatures were less than 1 ◦C warmer than today, experts warn of similar consequences in coming decades. Also because the rate of current emissions today happens faster.

The main culprit seems to be ice sheets which become in contact with warmer ocean waters. Thus, become vulnerable to non-linear disintegration, which means a rapid succession of land based ice sheets flushing into the ocean.

We argue that ice sheets in contact with the ocean are vulnerable to non-linear disintegration in response to ocean warming, and we posit that ice sheet mass loss can be approximated by a doubling time up to sea level rise of at least several meters.

We conclude that 2 ◦C global warming above the preindustrial level, which would spur more ice shelf melt, is highly dangerous. Earth’s energy imbalance, which must be eliminated to stabilize climate, provides a crucial metric.

Many people live near the ocean or large parts of food production happen in river deltas. With sea level rise of several meters in a few decades, it becomes questionable how or if people can learn to adapt. Obviously large populations are forced to move when storm surges and salt water intrusion render existing habitats uninhabitable.