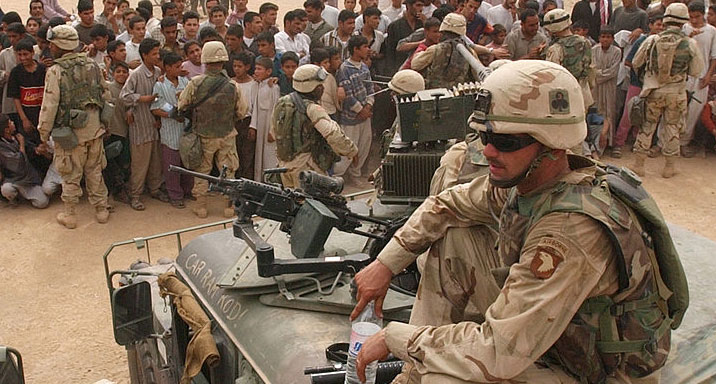 By Brian Merchant (Motherboard): Those who actively deny that climate change is a scientifically-established reality have never really been able to square one simple fact: The nation’s military leadership is in unified agreement that climate change is real, and also that it poses a clear and present danger to the troops.

The Pentagon’s thinking is revealed plainly and publicly in its own 2014 Quadrennial Review, which features no fewer than eight direct, specific, and unambiguous evaluations of climate change as it relates to geopolitics and military strategy. Forget the climatologists, for a second, ye of little faith in the scientific method, and let the military explain, in its own words, verbatim, what climate change is, and why we should be very worried about it.

Here, let’s allow the Pentagon to teach us about climate change:

These are not the words of some bowtie-wearing liberal college professor, or the scolding of a limelight-hogging politician, and it is not an op-ed from an increasingly frustrated climate scientist. These are the conclusions of cold, hard analysis from the military’s top strategists. And you respect the military’s top strategists, right? So respect this: The Pentagon has concluded that climate change will likely breed more terrorism, more unrest, and more conflict.

But wait, you might say, there are a lot of ‘may’s and ‘can’s in there; it doesn’t mean the military actually is taking it seriously. To that, observe its four-point plan of actively coping with and adapting its missions to the changing climate:

The military not only believes in climate change, but it believes that it warrants active mitigation, that it is a “threat multiplier,” a terrorist incubator, and an all around stressor to global stability. It believes in taking action.

In other words, saying “I don’t believe in climate change” and “I support the troops” officially requires a fair bit of cognitive dissonance.

Antarctic & Greenland Melt Accelerates Sea Level Rise
July 25, 2020
Subscribe
0 Comments
Inline Feedbacks
View all comments
Go to Top
wpDiscuz
0
0
Would love your thoughts, please comment.x
()
x
| Reply
Cookie Consent
To provide the best experiences, we use technologies like cookies to store and/or access device information. Consenting to these technologies will allow us to process data such as browsing behavior or unique IDs on this site. Not consenting or withdrawing consent, may adversely affect certain features and functions. Learn more about the data usage on this website.
Manage options Manage services Manage vendors Read more about these purposes
View preferences
{title} {title} {title}