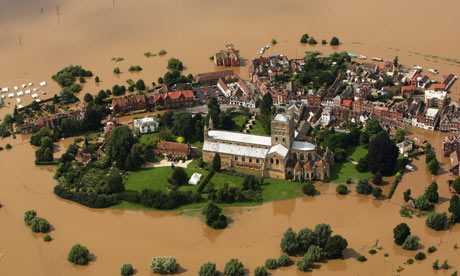 SkyNews: Miliband Issues Climate Change Warning The Labour leader says climate change is to blame for the floods and warns the UK is heading for a “national security crisis” In an interview with the Observer newspaper, Mr Miliband argued: “Storms and severe weather conditions that we have might have expected to occur once in 100 years, say, in the past, may now be happening more frequently and the reason is … that the climate is changing.”

The second wettest winter in 2012 and this winter’s one in 250-year event led him to one conclusion, he added. Conservative Defence Secretary Philip Hammond, who has admitted the military could have been brought in earlier to help deal with the flooding crisis, said Mr Miliband had not said “anything new”.

He said: “Climate change is clearly happening, it is clearly a factor in the weather patterns that we are seeing.

If you're waistdeep in water it's difficult not to confront reality. Will #floods push biz to act on climate change? http://t.co/lvEZJOGCQ8

UKERC research cited in The Guardian as Ed Miliband is urged to match bold words on climate change with real action http://t.co/nNkgr0F1hS

http://t.co/4I69NTbY16 Cameron has said it, Hammond has said it – is George Osborne awake yet or still in a climate-sceptic coma ?

Feature image via The Guardian (2013)

A Must See Video

The government is on top of things? Really? It’s starting to rain Noah…we
should start putting the boat together. LOL . There is only one thing for
them and all the rest of us to do, but as a people, as a whole we wont do
that one thing. The answer has been given, but we don’t find it believable.
I myself have given it many times, and I am found not credible. Just before
the bus hits us, does man not cry, oh my God? So all I can say is
pray……… or let it rain, let it rain.

Just have a look and search for the film ‘Age of Stupid’. It shows what a
bunch of idiots we humans are.

Talk about too little, too late!

Reply
Go to Top
wpDiscuz
7
0
Would love your thoughts, please comment.x
()
x
| Reply
Cookie Consent
To provide the best experiences, we use technologies like cookies to store and/or access device information. Consenting to these technologies will allow us to process data such as browsing behavior or unique IDs on this site. Not consenting or withdrawing consent, may adversely affect certain features and functions. Learn more about the data usage on this website.
Manage options Manage services Manage vendors Read more about these purposes
View preferences
{title} {title} {title}