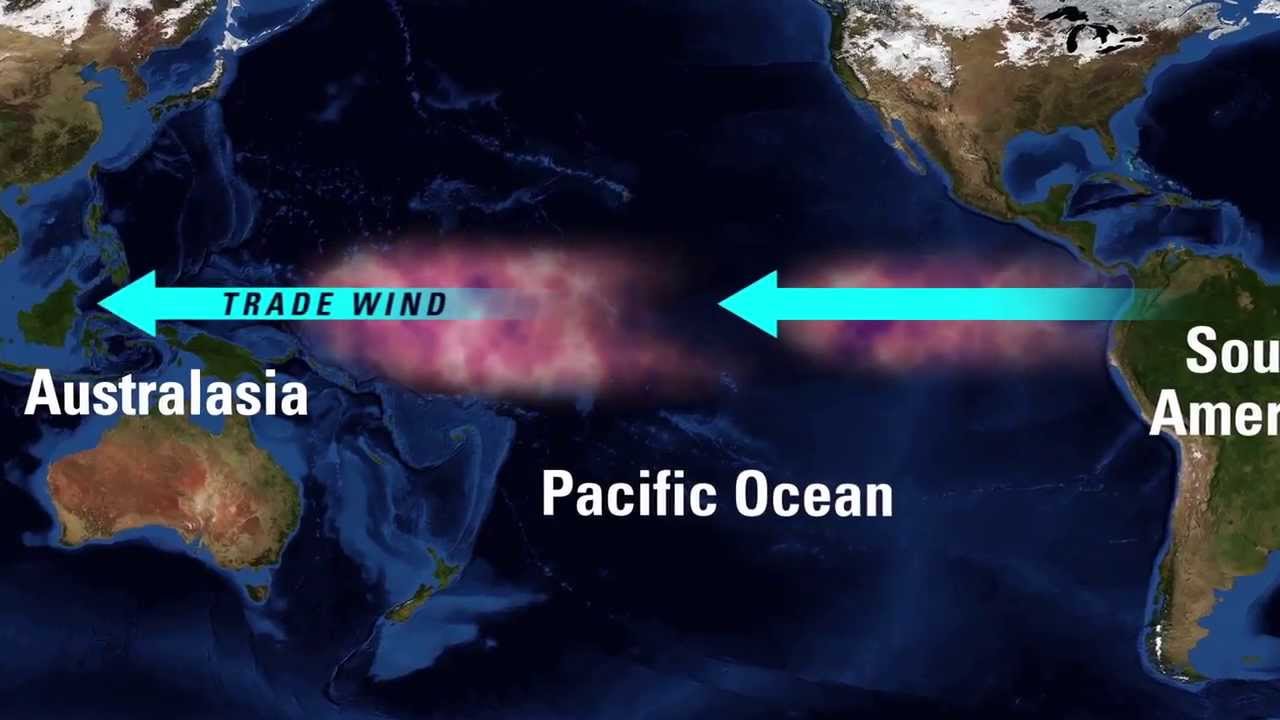 Published on Feb 9, 2014
Heat stored in the western Pacific Ocean caused by an unprecedented strengthening of the equatorial trade winds appears to be largely responsible for the hiatus in surface warming observed over the past 13 years.
New research published in the journal Nature Climate Change indicates that the dramatic acceleration in winds has invigorated the circulation of the Pacific Ocean, causing more heat to be taken out of the atmosphere and transferred into the subsurface ocean, while bringing cooler waters to the surface.

“Scientists have long suspected that extra ocean heat uptake has slowed the rise of global average temperatures, but the mechanism behind the hiatus remained unclear” said Professor Matthew England, lead author of the study and a Chief Investigator at the ARC Centre of Excellence for Climate System Science.

“But the heat uptake is by no means permanent: when the trade wind strength returns to normal – as it inevitably will – our research suggests heat will quickly accumulate in the atmosphere. So global temperatures look set to rise rapidly out of the hiatus, returning to the levels projected within as little as a decade.” – Earth imagery courtesy of NASA

RealClimate Going with the wind
A new paper in Nature Climate Change out this week by England and others joins a number of other recent papers seeking to understand the climate dynamics that have led to the so-called “slowdown” in global warming. As we and others have pointed out previously (e.g. here), the fact that global average temperatures can deviate for a decade or longer from the long term trend comes as no surprise. Moreover, it’s not even clear that the deviation has been as large as is commonly assumed (as discussed e.g. in the Cowtan and Way study earlier this year), and has little statistical significance in any case. Nevertheless, it’s still interesting, and there is much to be learned about the climate system from studying the details.

The Guardian: Stronger Winds Shift Heat to Deeper Pacific
Unprecedented trade wind strength is shifting global warming to the oceans, but for how much longer?
New research attributes the surface warming slowdown to accelerating trade winds mixing more heat into the oceans

Global temperature 2013
The global temperature data for 2013 are now published. 2010 and 2005 remain the warmest years since records began in the 19th Century. 1998 ranks third in two records, and in the analysis of Cowtan & Way, which interpolates the data-poor region in the Arctic with a better method, 2013 is warmer than 1998 (even though 1998 was a record El Nino year, and 2013 was neutral).

The ‘pause’ in global warming is not even a thing
All signs point to an acceleration of human-caused climate change. So why all this talk of a pause?

LOL they said there is no warming hiatus, then they try to explain away the
warming hiatus.
These people are funny.

seeing how earth has warmed and cooled since the beginning of time , maybe these unpredicted trade wins are part of a natural system to maintain the temperature, if the government had their way the earth would stay the same temperature till the end of man made time, but that is super unnatural , their have been rainforests on the poles and ice that has covered all of europe long before we could effect the planet, When homo-sapiens evolved we were stuck in africa because the cold harsh Europe was much to cold and home to the more hardy Neanderthals,… Read more »

I agree that the sea has warmed, not necessarily from above but below, from
the mantle.

The only place to study the waxing and waning of heat to the Earth is from
space.
Therefore the best forecast was made in 2005 from data collected from the
International Space Station called the Astrometria project.

That combined with the fossil record gives an excellent guide to the future
trend of the Earth’s temperature. – and it is not upwards again until 2100.

Good video, thanks for that. I am not looking forward to the next El Nino
event then.

Reply
Go to Top
wpDiscuz
10
0
Would love your thoughts, please comment.x
()
x
| Reply
Cookie Consent
To provide the best experiences, we use technologies like cookies to store and/or access device information. Consenting to these technologies will allow us to process data such as browsing behavior or unique IDs on this site. Not consenting or withdrawing consent, may adversely affect certain features and functions. Learn more about the data usage on this website.
Manage options Manage services Manage vendors Read more about these purposes
View preferences
{title} {title} {title}