A Looming Climate Shift: Will Ocean Heat Come Back to Haunt us? 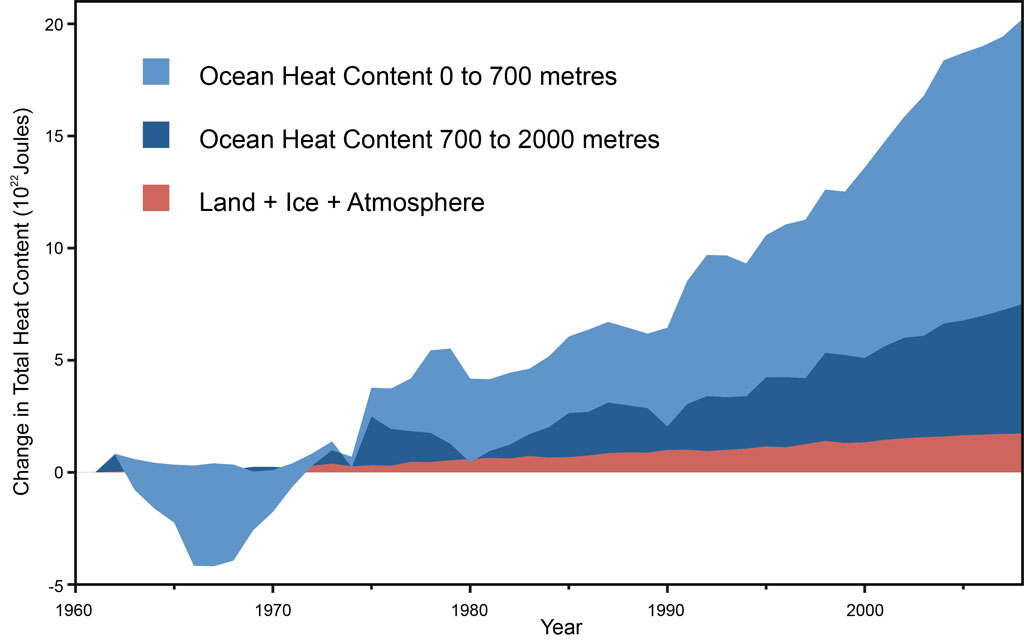 Even with Global Dimming, Still Lots of Warming Down Below

The way that global warming has progressed in the 21st century has probably been a great surprise to many people, no doubt a few climate scientists among them. Despite a strong increase in planet-warming greenhouse gas emissions, warming of global surface temperatures has been rather muted. Surface temperatures have warmed, but at a slower rate than the last two decades of the 20th century.

Of course, the 2000’s doesn’t strictly qualify as a hiatus decade as defined in Meehl (2013) – where hiatus decades are described as negative global surface temperaturetrends – but it is, nevertheless, a suitable analogue.

Increases in sunlight-blocking sulfate pollution (from industrial activity) during the early part of the 21st century have probably played a role (Hatzianasstissiou [2011]), as have sulfate emissions from tropical volcanoes (Solomon [2011], Vernier [2011]), but the most significant contributor to this muted surface warming trend are natural changes in the way heat is stored in the ocean.When large amounts of heat are efficiently transported to the deep ocean (as in the 2000’s – see Levitus [2012], Nuccitelli [2012] & Balmaseda [2013]), there is less heat available at the ocean surface with which to raise global surface temperature.

This can be better understood by considering the effects of the El Niño-Southern Oscillation (ENSO) on the vertical distribution of heat in the surface layers of the ocean. During El Niño heat builds up in the surface layers where it is able to interact with the atmosphere, and therefore raises global surfaces temperatures. During La Niña much more heat is transported to deeper ocean layers and, with the surface layers cooler-than-normal, global surface temperatures are cooler-than-average. This can be seen in Figure 2 – using observations from the global system of ARGO floats.

The Interdecadal Pacific Oscillation (Power [1999]) is an index for the mean state of the north and south Pacific Oceans. During the positive phase, El Niño is the dominant global weather pattern, and during the negative phase, La Niña is dominant. During the late 1990’s the positive IPO phase weakened considerably and has been in the negative phase since the year 2000. In other words, La Niña been the dominant pattern of late. It is therefore not surprising that global surface temperatures during the 2000’s have warmed less than previous decades (1977-2000) – when the IPO was in a positive (El Niño-dominant) state.

Though not strictly true, it’s easier to think of the ocean circulation as two distinct but interconnected processes – the wind-driven ocean circulation which warms and ventilates (mixes air into) the surface-to-deep ocean (down to about 2000 metres), and thethermohaline circulation which warms and ventilates the deep-to-abyssal ocean (2000 mtrs to ocean floor), and which is mainly driven by changes in the bouyancy and density of seawater. The wind-driven ocean circulation can be described as a pool of warm salty surface ocean sitting on top of a cold fresh (less salty) abyssal ocean.

Meehl (2013) once again uses the NCAR CCSM4 climate model to evaluate decadal periods of either accelerated warming, or slight cooling (hiatus decades). To accomplish this the authors use a moderate future (fossil fuel) emissions scenario for the 21st century combined with historical simulations of the 20th century. This future emissionsscenario is chosen because the climate forcing is not so strong that hiatus decades disappear entirely in the latter part of the 21st century simulations.

From five climate model runs of the 21st century the authors derive 500 years worth of simulations. The hiatus decades were chosen based on a slight cooling trend in global surface temperatures of less than -0.08°C per decade. Eight decades match this criteria and the composite of their surface temperature trends are shown in Figure 1(a). If a zero decade-long temperature trend were chosen as well, then there are many more decades that fall under that criteria, including three instances where no warming lasts for 14 years, and one where this persists for 15 years.

It is apparent in Figure 1, that the hiatus and accelerated warming decades are virtually the mirror image of each other. The warm sea surface temperatures in the gyres, during hiatus decades, indicate convergence of near-surface currents and strong downwelling of heat. With accelerated decades the vertical, and poleward, transport of heat by the gyres seems to shutdown, enabling strong sea surface warming in the tropics – where mostsolar radiation enters the ocean. The strong warming in the polar regions is related to changes in the thermohaline circulation.

Figure 3(a) – average linear trends for hiatus decades versus trends for all other decades, broken down into 3 ocean layers. The top-of-the-atmosphere radiation balance (left-hand columns) is strongly positive, indicating a strong global warming trend. The error bars denote 5% statistical significance. 3(b) – same as above except for accelerated warming decades. From Meehl (2013).

Although I have not delved into it here (to keep things less complicated), changes to the thermohaline circulation, specifically the Atlantic Meridional Overturning Circulation(AMOC) and Antarctic Bottom Water (AABW) formation, also play a part in the hiatus and accelerated warming decades in the climate model. The thermohaline changes associated with the IPO suggest a common mechanism at work – most likely the changes in wind forcing. All three processes (IPO, AMOC & AABW) are contributors in each hiatus and accelerated decades, but the authors analysis reveals the IPO to play the dominant role.

During the late 1970’s global surface temperatures changed so quickly (Graham [1995]) that some researchers labelled this a ‘climate shift’ (Miller [1994], Wainwright [2008]). It was later shown that this climate shift was simply the human-caused global warming trendcombining with the positive (warm surface ocean) phase of the Interdecadal Pacific Oscillation (Meehl [2009]). With both driving forces moving in same (warming) direction, they combined to nudge global surface temperatures sharply upwards.

The late 1970’s climate shift is an appropriate analogue for the near-future because, based on the modelling in Meehl (2013) and other peer-reviewed scientific papers not discusssed here, the current negative IPO (cool surface ocean-warm deep ocean) trend is likely to come to an end sometime soon. The NCAR climate model suggests that these phases can last up to 15 years, but are generally around a decade in length. This climate model-based IPO cycle length is shorter than the IPO cycle length observed during the 20th century, however the reasons for this disparity are not yet clear.

Whenever this phase reversal does kick in there are likely to be significant changes in global rainfall patterns (Dai [2012]), drought, mass coral bleaching and fish catches (caused by change in the wind-driven upwelling of nutrients in key areas of the ocean). Just how significant this is will depend on how much heat remains in the surface ocean during the next positive phase of the IPO.

So to answer the question posed in the title – will ocean heat come back to come to haunt us? Yes, but perhaps not in the way some might think. Heat buried in the deep layers of the ocean will not re-surface any time soon. Instead, when the subtropical ocean gyres spin down, they will no longer be efficiently removing heat from the tropical surface ocean. The transport of ocean heat to depths, and to the poles, will drastically slow down, and this will allow the surface of the tropical oceans to warm rapidly. That heat is very likely to haunt us.

Feature image via SkepticalScience “Where is Global Warming Going”?

With an El Nino event forecast the heat may be coming back out of the oceans soon. http://www.climateoutcome.kiwi.nz/blog.html