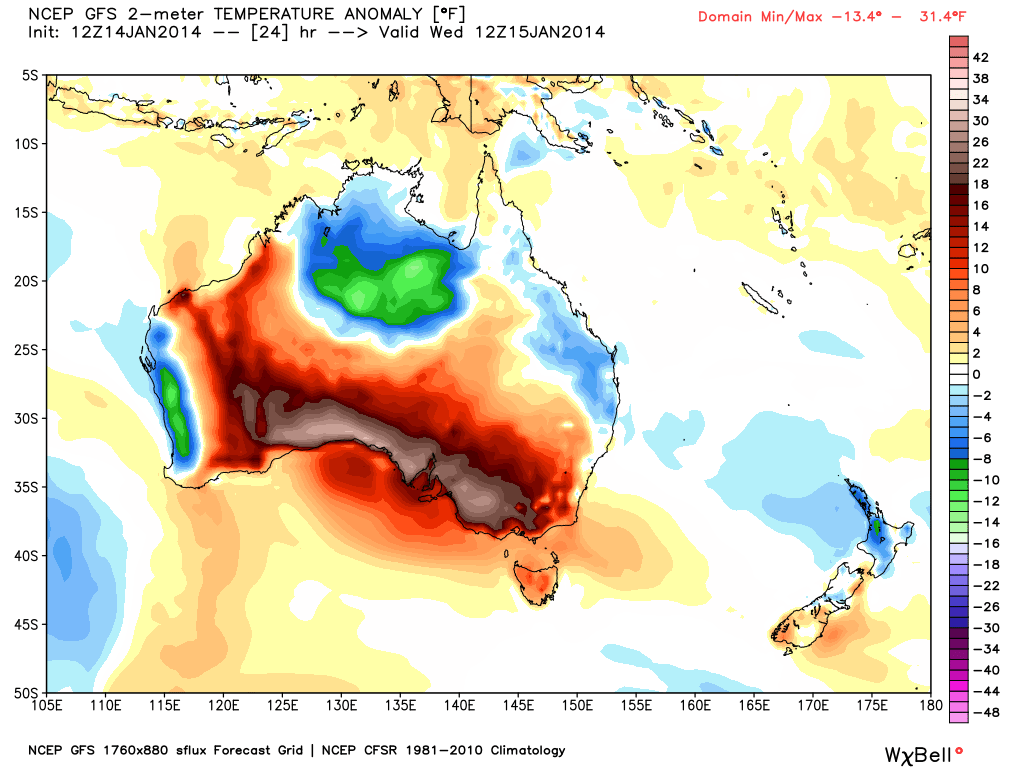 Adelaide could break its 75-year-record for its hottest day – a searing 46.1C in January 1939 – after its warmest night in five years.

Acting regional director at the Bureau of Meteorology, John Nairne, says a new record high for the city is not out of reach.

“The trick with the heatwave is the high minimum we’ve come off overnight,” he said.

“In Adelaide we came off a temp of 30 degrees this morning so we get to the high temps quicker and have to endure them for longer during the day.”

The bureau says a forecast mild change will arrive later than expected, with a fifth day in the 40s likely tomorrow.

Adelaide could be the hottest city on earth today, according to reports, and the temperature has already climbed above 40 degrees Celsius for the fourth day in a row

The number of people being treated for heat stress has steadily increased this week.

Janice Fletcher from the Australian Medical Association says fatigue and irritability are commonplace, as people struggle for relief.

“People are probably tired and getting sick of it. It depends on if they can get sleep, how they feel when they wake up,” she said.

Electricity distributors have warned of possible rolling blackouts if the pressure on the electricity grid reaches boiling point.

The Government has confirmed power could be switched off to suburbs to prevent a system meltdown, as air-conditioners kick into overdrive.

Read the rest of the article

Temperature difference from normal as simulated by the GFS model for Wednesday (WeatherBell.com)

Ahh… I get it. The last time there was a heat wave as bad as the current one was back in 1939. So…. climate change was being effected by all the industrialised countries in the world back then (and there were SO many of them! SARCASM!). Then… in the 1940s… Europe had some of the coldest winters on record. That would be because of the AUSTRALIAN heat wave caused by the Northern Hemisphere’s industrialisation…. which made things up there, cold! Right. Got it. Very simple. Climate change is a thing that White people cause… and it goes back in time… Read more »

You’ll can take a very long trip to Fargo, North Dakota, USA for you really
cool-down to 30’s -vs 48 degree C. think San Diego, CA & Maui, Hawaii would
be your much better choices.

Prayers to All those Affected

I have been repeatedly mentioning this Australian heat wave to all the
Climate deniers who are saying the Polar Vortex was proof against Climate
Change. I have also been mentioning the nontypical heat in Germany for
winter.

The Climate Deniers love to ignore the rest of the world and only talk
about the weather where they are.

Hey, but it’s cold here in the USA so according to the deniers climate
change has stopped. They are calling this Global Cooling. Lol. We are so
screwed .

One solution, would be to ground all non essential air traffic, by
permanently making holidays abroad by airliners a thing of the past. As an
alternative to travel requirements by holiday makers, Thorium reactor
powered ships could be built to transport people to their destinations.
Research Thorium reactors. A safer alternative to the Nuclear reactor.

Burn Australia, burn!
That’s for ignoring global warming and climate change. This is only the
begining.

Reply
Go to Top
wpDiscuz
9
0
Would love your thoughts, please comment.x
()
x
| Reply
Cookie Consent
To provide the best experiences, we use technologies like cookies to store and/or access device information. Consenting to these technologies will allow us to process data such as browsing behavior or unique IDs on this site. Not consenting or withdrawing consent, may adversely affect certain features and functions. Learn more about the data usage on this website.
Manage options Manage services Manage vendors Read more about these purposes
View preferences
{title} {title} {title}