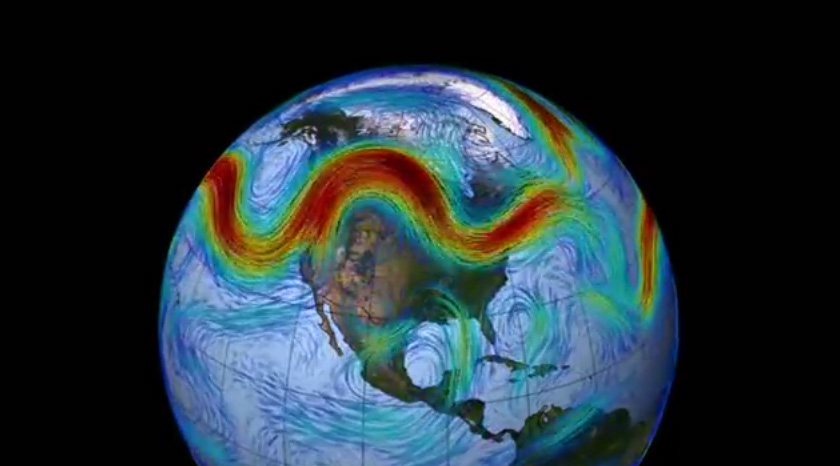 Carson Walker: Temperature records will likely be broken during the short, yet forceful deep freeze that will begin in many places on Sunday and extend into early next week. That’s thanks to a perfect combination of the jet stream, cold surface temperatures and the polar vortex — a counterclockwise-rotating pool of cold, dense air, said Ryan Maue, of Tallahassee, Fla., a meteorologist for Weather Bell. URL

Dennis Lynch: Meteorologists across the nation have pointed to a ‘polar vortex’ as one of the many systems responsible for what is set to be a rare and extreme weather weekend. URL

Here’s What The ‘Polar Vortex’ That’s Hitting The US Actually Is Business Insider ( Jan 5, 2013)

Lauren Friedman: Polar vortexes, though, are nothing new. They occur seasonally at the North Pole, and their formation resembles that of hurricanes in more tropical regions: fast-moving winds build up around a calm center. Unlike a hurricane, these are frigid polar winds, circling the Arctic at more than 100 miles per hour.

The spinning winds typically trap this cold air in the Arctic. But the problem comes when the polar vortex weakens or splits apart, essentially flinging these cold wind patterns out of the Arctic and into our backyards. NOAA scientists have suggested that warming temperatures in the Arctic may be responsible for the weakening of the polar vortex. When the vortex weakens, it’s more likely to break apart and become a factor in our winter weather. URL

Andrew Freedman: The atmospheric blocking, which is not as strong as some other blocking events in recent years, is forcing a large section of the polar vortex to break off and move south out of Central Canada and into the U.S. The polar vortex is an area of cold low pressure that typically circulates around the Arctic during the winter, spreading tentacles of cold southward into Europe, Asia, and North America at times. URL

Andrew Freedman: At the peak of the Arctic outbreak, temperatures may be between 20°F and 40°F below average in large parts of the continental U.S., with dangerous wind chills affecting cities like Minneapolis, Chicago, Cleveland, St. Louis, Washington, D.C., New York, and Boston. The U.S. will have the dubious distinction of experiencing the largest cold temperature anomalies of any land area in the Northern Hemisphere during the height of the biting cold. By comparison, temperatures across Greenland and much of the Arctic will be above average for this time of year, albeit still frigid. URL

Computer model projection showing the location of the polar vortex (outlined in orange) and areas of below average temperatures (green and blue) and above average temperatures (orange and red), as indicated by the height of atmospheric pressure levels. The annotations show the cold temperature anomaly in the U.S. and mild anomalies across the Arctic. Credit: WeatherBELL Analytics.

Scott K. Johnson: Qiuhong Tang and Xuejun Zhang, of the Chinese Academy of Sciences, and Jennifer Francis, of Rutgers, decided to look for patterns of atmospheric change correlated with the loss of Arctic summer sea ice and the decline of early summer snow cover. Using reanalyses, which generate global datasets based on all the available measurements, they examined how the lower, middle, and upper troposphere responded to variations in sea ice and snow cover from 1979 (the start of the satellite era) to 2012.

They found modest correlations with the behavior of high-level winds and the differences in atmospheric pressure that drive them, more so for sea ice than snow cover. Over most regions, the average position of the jet stream moved a little northward when summer sea ice was smaller, while the opposite was true for the western edges of continents. The high-level, west-to-east winds of the jet stream also slowed a bit.

Those two factors are consistent with the hypothesized link between sea ice and weather extremes. When the jet stream slows, it gets wigglier, with ponderous meanders extending north and south. Because the temperature difference across the jet stream is so large, these slow-moving excursions can lead to temperature extremes. The early loss of snow cover can exacerbate this, as it means soils can dry out earlier in the summer. Not only does that make a region susceptible to drought, but low soil moisture allows temperatures to rise higher.

Looking through the data, University of Exeter researcher James Screen saw that wet conditions are associated with the jet stream coming south from its average position. Conversely, it’s drier when it stays far to the north. Screen ran two climate model simulations: one in which Arctic sea ice was present at its 1979 extent and one at its diminished 2009 extent. Each simulation was repeated for a century’s worth of summers to calculate the average position of the jet stream over Europe.

Consistent with the study by Tang, Zhang, and Francis, the lower sea ice extent in the model was associated with the jet stream moving a little southward over Europe as part of its amplified “wiggliness.” That brought more precipitation to Northern Europe in the model simulations.

However, Screen emphasizes that these things vary quite a lot from year to year on their own, and the simulated sea ice impact was only a slight shift. “This means that whilst low sea ice coverage increases the risk of wet summers, other factors can easily negate this influence and lead to dry summers during depleted ice conditions or wet summers during extensive ice conditions,” he writes. URL

Steve Tracton: Investigation of differences between northern hemisphere winters from 2001-2013 and 1998-2000 leaves little doubt that a large and consequential trend has occurred in the configuration of the polar jet stream which is linked directly to pronounced warming in high northern latitudes. Moreover, the overall trend has remained largely unbroken and appears to have accelerated in the last six winters.

The coupling between Arctic warming and polar jet is oft referred to as arctic amplification. It features a likely, but not yet definitively proven, link to the apparent increase in extreme, high impact winter weather events occurring over varying regions in mid-to-high latitudes in the northern hemisphere.

It’s critical to note that the seasonal averages examined reflect the net effects of considerable variability of weather systems and processes.  As shown below, the single most prominent signal in the means (averages) to emerge from this variability during the 2000s is one closely resembling the negative phase of the North Atlantic Oscillation (hereafter referred to as -NAO). It is well known that periods of -NAO are favorable for major winter storms affecting the mid-high latitudes from eastern North America though western Europe. Preceding and/or accompanying such storms are surges of anomalous cold penetrating further south over eastern U.S. than nominally expected. URL

Andrew Freedman: Scientists have only recently begun to detect changes in the jet stream that may be tied to global warming. Unraveling the complexities of this emerging scientific research is critical to understanding where our weather is headed.

As the globe continues to warm, it is already having an effect on the jet stream and corresponding weather patterns, according to the latest U.N. IPCC climate report, which states: “It is likely that circulation features have moved poleward since the 1970s, involving a widening of the tropical belt, a poleward shift of storm tracks and jet streams, and a contraction of the northern polar vortex. Evidence is more robust for the Northern Hemisphere.” The research that goes into this statement comes from multiple lines of evidence – from analyses of the expansion of the tropical Hadley Cell to satellite measured outgoing radiation, radiosonde observations, and weather pattern reanalyses. But just as certainty builds for a poleward shifting jet, there still remain questions about whether the jet is amplifying and promoting more blocking patterns. URL

Cold winter in a world of warming? Real Climate (2010)

Rasmus Benestad: One interesting question is how the Barents-Kara sea-ice affects the winter temperatures over the northern continents. By removing the sea-ice, the atmosphere above feels a stronger heating from the ocean, resulting in anomalous warm conditions over the Barent-Kara seas. The local warming gives rise to altered temperature profiles (temperature gradients) along the vertical and horizontal dimensions.

Changes in the temperature profiles, in turn, affect the circulation, triggering a development of a local blocking structure when the sea-ice extent is reduced from 80% to 40%. But Petoukhov and Semenov also found that it brings a different response when the sea-ice is reduced from 100% to 80% or from 40% to1%, and hence a non-linear response. The most intriguing side to this study was the changing character of the atmospheric response to the sea-ice reduction: from a local cyclonic to anti-cyclonic, and back to cyclonic pattern again. These cyclonic and anti-cyclonic patterns bear some resemblance to the positive and negative NAO phases. URL

JANUARY 7, 2014 : Democracy Now news report with Dr. Jeff Masters Weather Whiplash: As Polar Vortex Brings Deep Freeze, Is Extreme Weather Linked to Climate Change? http://www.democracynow.org/2014/1/7/weather_whiplash_as_polar_vortex_brings Extract: AMY GOODMAN: That was Rush Limbaugh. Jeff Masters, your response? JEFF MASTERS: It’s good for entertainment, but you don’t go to Rush Limbaugh for science. I mean, the polar vortex has been around forever. It’s just the media happened to latch onto it this week. I don’t know why, but it sure did kind of snowball. It’s been around—you know, I’ve been talking about the polar vortex for years. It’s just… Read more »

The Midwest is in a deep freeze; is climate change the culprit? | Gifted Matters

[…] change has contributed to the “deadly" polar vortex.  Here’s one of the links I viewed:  http://climatestate.com/2014/01/05/polar-vortex-jet-stream-and-climate-change/ According to Dr. Jennifer Francis, a scientist at Rutgers University, the warmer weather in the […]

Could you explain the significance of 500 mb for these graphics. Is atmospheric pressure being used instead of altitude? Does the jetstream vary in altitude as well as north-south amplitude, and east-west frequency? When the jetstream slows down I assume it’s less forceful, therefore, other weather activities have a greater effect on it, am I correct?

Also if there are further insights into how the jetstream works or affects our weather it would be much appreciated.

Meteorologist Jeff Haby explains the 500 mb pressure: The polar vortex is analyzed at 500 millibars. The polar vortex occurs above the core of the coldest polar air. Since frigid air is dense, heights are lower aloft because cold air has a lower thickness than warmer air. At the surface of the polar air mass will be high pressure, but low heights will occur aloft at 500 mb since the air is compacted due to high density air near the surface. The polar vortex can often be located over Canada since the coldest surface air is often found over high… Read more »

Reply
Go to Top
wpDiscuz
8
0
Would love your thoughts, please comment.x
()
x
| Reply
Cookie Consent
To provide the best experiences, we use technologies like cookies to store and/or access device information. Consenting to these technologies will allow us to process data such as browsing behavior or unique IDs on this site. Not consenting or withdrawing consent, may adversely affect certain features and functions. Learn more about the data usage on this website.
Manage options Manage services Manage vendors Read more about these purposes
View preferences
{title} {title} {title}
Loading Comments...