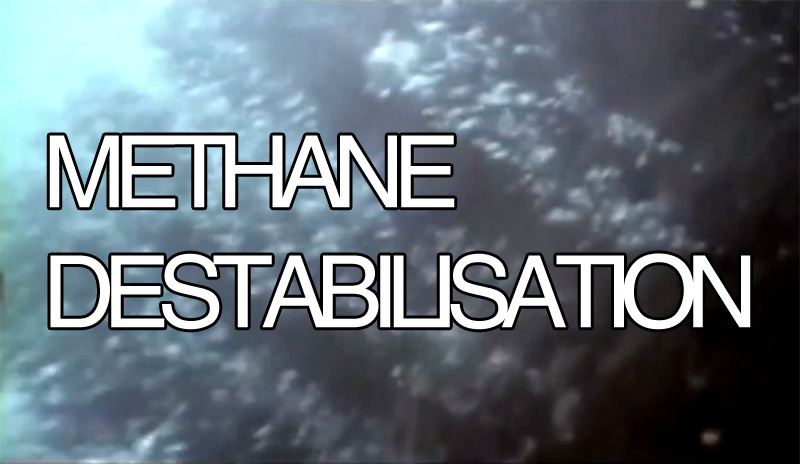 Excerpts from an episode of History Channel’s “Mega Disasters” series. This explores the paper published by Northwestern University’s Gregory Ryskin. His thesis: the oceans can produce massive eruptions of explosive methane gas.

Methane distribution in the water column: Once released into the water column, methane is distributed by currents and aerobic methane oxidation by bacteria converts it to CO2.
In deeper water methane enriched layers often follows the same density gradients but in shallow waters methane from seeps might be released directly into the mixed layer and thus is effectively transported towards the sea surface. Here it equilibrates with the atmosphere and depending on temperature, salinity and wind forces is transported into the atmosphere as measurable flux. http://www.cost-pergamon.eu/HTML/wp3….

Hydrogen sulfide has been implicated in several mass extinctions that have occurred in the Earth’s past. In particular, a buildup of hydrogen sulfide in the atmosphere may have caused the Permian-Triassic extinction event 252 million years ago. Organic residues from these extinction boundaries indicate that the oceans were anoxic (oxygen-depleted) and had species of shallow plankton that metabolized H2S. The formation of H2S may have been initiated by massive volcanic eruptions, which emitted carbon dioxide and methane into the atmosphere, which warmed the oceans, lowering their capacity to absorb oxygen that would otherwise oxidize H2S. The increased levels of hydrogen sulfide could have killed oxygen-generating plants as well as depleted the ozone layer, causing further stress. Small H2S blooms have been detected in modern times in the Dead Sea and in the Atlantic ocean off the coast of Namibia https://en.wikipedia.org/wiki/Hydroge…

Methane, CH4, is continuously produced beneath the ocean floor. Most of this methane is consumed by archaea and bacteria in the upper layer of sediments; the rest escapes into the overlying water column as bubbles. (For present purposes, it is immaterial whether some part of this methane flux results from dissociation of methane hydrates.) In a well-oxygenated(or anoxic but sulfate rich) water column, dissolved methane, as well as the sinking organic matter from the surface waters, is oxidized by microbes. But unlike the rising bubbles of methane or the sinking particles of organic matter, which can traverse the entire water column in a few days, oxygen molecules or sulfate ions can be delivered to the water column only by fluid flow (or diffusion, which is very slow). In stagnant water masses, therefore, the oxidation potential of the water column will be eventually overwhelmed by the flux of sinking organic matter, plus the flux of methane bubbles from the seafloor.

Evidence of such accumulation exists both in direct measurements and in the geological record. The only long-term series of the former, the Cariaco Basin, shows that methane concentration in the deep waters of the basin is increasing with time, roughly linearly (Figs. 6d and 7 of Scranton et al., 2001). The micro fossil carbon isotope data from the Santa Barbara Basin sediment core show that high levels of dissolved methane were present periodically in the water column (Ken-nett et al., 2000). This has been confirmed by a microbial-biomarker study (Hinrichs et al., 2003), and is likely to be representative of oceanic regions prone to stagnation and anoxia, such as silled basins or deep-water masses isolated by topography and Taylor columns. (Such regions are likely to have sizes below the resolution of ocean circulation models used in biogeochemical studies; e.g., Hotinski et al.[2001].)

The time scale of the meridional overturning circulation,;103yr, has little relevance for the water masses that do not participate in it; these can only be mixed by turbulence resulting from breaking of the internal gravity waves (ultimately due to tides and winds). The corresponding vertical (diapycnal) turbulent diffusivity K is typically;10^-5 m^2 s^-1, and can be as low as 0.5 x 10^-6 m^2 s^-1(Gregg et al.,2003); the latter translates into K = 16 m^2 yr^-1. This means that it may take a million years for turbulent mixing to penetrate vertically through (Kt)^1/2 4km (t being time). (The tracer-based estimates ofthe age of water masses are controversial [Wunsch, 2002] and are not used here.) In stagnant water masses, accumulation of dissolved methane may thus continue for very long times. Assuming that dissolved methane can accumulate to high concentrations.