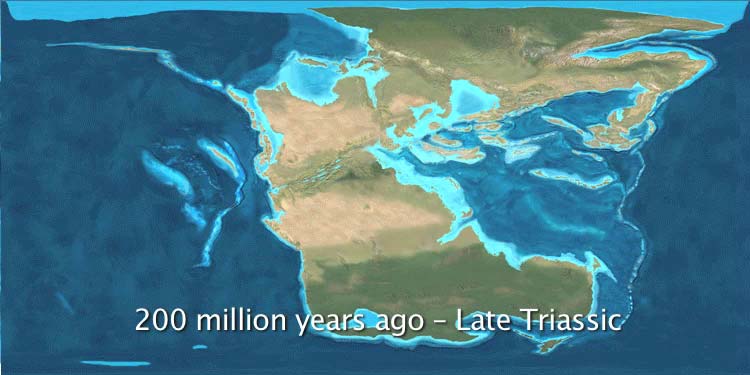 The Late Triassic mass extinction event is the most severe global warming-related crisis to have affected important extant marine groups such as scleractinian corals, and offers potential insights into climate change scenarios. Here we present evidence from Chlorobi-derived biomarkers of episodic and persistent photic zone euxinia. From biomarkers and stable carbon isotopes, we present evidence of rapid mixing of atmospheric and oceanic carbon reservoirs. Global versus regional trends are resolved in kerogen organic matter type, carbonate δ13C, and bulk and pyrite δ34S. This suite of data demonstrates for the first time a comprehensive organic and stable isotope geochemical reconstruction of events leading up to the Late Triassic extinction event and its aftermath. The cascade of events prior to, during, and after the extinction is remarkably similar to those reported for the Late Permian extinction, the largest extinction event of the Phanerozoic. We predict that similar conditions will have occurred during all past episodes of rapid global warming and biotic crisis that are associated with similar rises in pCO2. Source

Although a few taxa have their last regional occurrences at the boundary between the Lilstock Formation and the overlying Blue Lias Formation, all of the taxa that become globally extinct have their last occurrences within a short stratigraphic interval spanning the uppermost Westbury Formation to lower Lilstock Formation (Mander et al., 2008), just below the first negative carbon isotope excursion (Hesselbo et al., 2004) (Fig. DR1). Studies of sampling and preservational biases suggest that, for the bivalves at least, this extinction event is real, and not an artefact of the rock and fossil records (Mander and Twitchett, 2008). The upper Cotham and lower Langport members are almost devoid of benthic macrofossils and have been interpreted as a postextinction ‘Dead Zone’ (Mander et al., 2008). Post-extinction recovery was complete by the Angulata Zone of the Hettangian (Barras and Twichett, 2007; Mander et al., 2008).

Correlation of the Extinction Event with Changes in Atmospheric pCO2

The TJB atmospheric pCO2 record is derived from analysis of plant fossil cuticle from a site in East Greenland (McElwain et al., 1999; Steinthorsdottir et al., 2011). Published correlations between St Audrie’s Bay and East Greenland have been made from detailed palynological and stable isotopic analyses (Belcher et al., 2010; Mander et al., 2013). These published correlations have been used in this study to correlate the pCO2 data with our samples. Although these correlations are robust around the extinction event and TJB, the precise point at which pCO2 values return to pre-extinction levels within the Hettangian is less constrained, and herein we follow the correlation of (Belcher et al., 2010). It is possible that the return to pre-extinction levels of pCO2 occurred as early as the base of the Planorbis Zone or as late as the Angulata Zone.

Additional pCO2 data were recently published from analyses of soil carbonates of the Newark Basin (Schaller et al., 2011). The good magnetostratigraphic record at St Audrie’s Bay (Hounslow et al., 2004), enables correlation with these sections in the Newark Basin (Deenen et al., 2010). This correlation demonstrates that the lowest CAMP basalts correlate with the extinction event (Deenen et al., 2010; Mander et al., 2013), although the resolution is not good enough to precisely correlate individual paleosol horizons of (Schaller et al., 2011) with our samples. Thus, we have used the better correlated East Greenland data of (McElwain et al., 1999) and (Steinthorsdottir et al., 2011) to provide a comparative pCO2 record in this study. Source

The end-Triassic mass extinction (c. 201.6 Ma) was one of the ﬁve largest mass-extinction events in the history of animal life. It was also associated with a dramatic, long-lasting change in sedimentation style along the margins of the Tethys Ocean, from generally organic-matter-poor sediments during the Triassic to generally organic-matterrich black shales during the Jurassic. New core material from Germany provides biomarker evidence of persistent photiczone euxinia during the Hettangian, the onset of which is associated with a series of both negative and positive carbon isotope excursions.

Combined inorganic and organic geochemical and micropalaeontological analyses reveal strong similarities between the Hettangian and the better-known Toarcian anoxic event. These events appear to be the most clearly expressed events within a series of anoxic episodes that also include poorly studied black shale intervals during the Sinemurian and Pliensbachian. Both the Hettangian and Toarcian events are marked by important changes in phytoplankton assemblages from chromophyte- to chlorophytedominated assemblages within the European Epicontinental Seaway.

Phytoplankton changes occurred in association with the establishment of photic-zone euxinia, driven by a general increase in salinity stratiﬁcation and warming of surface waters. For both events, the causes of large negative carbon isotope excursions remain incompletely understood; evidence exists for both variation in the d 13C of atmospheric CO2 and variation in the sources of organic carbon. Regardless of the causes of d 13C variability, long-term ocean anoxia during the Early Jurassic can be attributed to greenhouse warming and increased nutrient delivery to the oceans triggered by ﬂood basalt volcanism. Source

Widespread deposition of black shales in the EES occurred in the aftermath of the Triassic–Jurassic and Pliensbachian–Toarcian mass-extinction events. In both cases, black shale deposition was associated with photiczone euxinia, as shown by the presence of fossilized remains of GSB (Chlorobiaceae). Phototrophic GSB were likely important primary producers during these time intervals, which is reﬂected in the abundance of AOM with a type-I and type-II signatures and high HI values. More importantly, the proliferation of GSB was accompanied by major changes in phytoplankton communities, suggesting wholesale changes in physico-chemical conditions in the water column. The Triassic–Jurassic boundary represented a real bottleneck for chromophyte (red) algae. Cyst-producing dinoﬂagellates virtually disappeared from the EES for many million years after the Triassic–Jurassic boundary and were replaced by archaic taxa belonging to chlorophyte (green) algal lineages, including acritarchs and prasinophytes. This scenario was repeated during the deposition of Toarcian black shales. Based on characteristic assemblages of primary (phytoplankton) and secondary (phototrophic bacteria) producers, physical–chemical conditions of the water column in the EES prior to and during euxinia can be reconstructed schematically (Fig. 10). During periods of well-oxygenated water mass conditions, cyst-forming dinoﬂagellates were at an ecological advantage. During periods of restriction and salinity-enhanced stratiﬁcation, prasinophyte green algae proﬁted from ammonium availability.

The controlling factors on sulphur bacteria, light and sulphide concentration, demanded a shallow chemocline, leading to an upwards shift in redox boundaries from the sediment into the water column. As a result, Hettangian and Toarcian water masses in the EES were probably by default rich in methane, but this methane was likely incorporated in diagenetic carbonates, leading to anomalies in C-isotope records that should not be confounded to indicate global changes in exogenic carbon reservoirs. Both the Rhaetian–Hettangian and Pliensbachian–Toarcian transitions are associated with a series of positive and negative carbon isotope excursions that are best expressed in organic matter. Because of important changes in organic matter associated with either event shown by palynological and organic geochemical studies, 13Corg records should be interpreted with caution. For the Triassic–Jurassic boundary, organic C-isotope records appear to reﬂect the relative strength of marine organic matter deposition, whereby more marine organic matter imparted a lighter C-isotope signature to the bulk signal. These changes in organic matter sources were likely contemporaneous over large distances, and some of the excursions might appear also fortuitously simultaneous.

Many of the palaeo-environmental changes associated with Rhaetian–Hettangian and Pliensbachian–Toarcian boundaries can be explained by a similar scenario, in which the emplacement of a LIP takes centre stage (Fig. 11). This raises important questions about the driving mechanisms behind black shale events during the Sinemurian and Pliensbachian, for which there is no direct link with ﬂood basalt activity. The temporal mismatch between methane release from gas hydrates and the onset of euxinia and mass extinction suggests that at best methane release was a consequence and not a driving mechanism. There is increasing evidence that the release of volatiles to the atmosphere from widespread ﬂood basalt volcanism, especially through interaction with surrounding crustal rocks, was among the prime causes for the end-Triassic and Pliensbachian–Toarcian mass extinction and ensuing marine anoxic events.

Ocean anoxic events were periods of high carbon burial that led to drawdown of atmospheric carbon dioxide, lowering of bottom-water oxygen concentrations and, in many cases, significant biological extinction1, 2, 3, 4, 5. Most ocean anoxic events are thought to be caused by high productivity and export of carbon from surface waters which is then preserved in organic-rich sediments, known as black shales. But the factors that triggered some of these events remain uncertain. Here we present stable isotope data from a mid-Cretaceous ocean anoxic event that occurred 112 Myr ago, and that point to increased thermohaline stratification as the probable cause. Ocean anoxic event 1b is associated with an increase in surface-water temperatures and runoff that led to decreased bottom-water formation and elevated carbon burial in the restricted basins of the western Tethys and North Atlantic. This event is in many ways similar to that which led to the more recent Plio-Pleistocene Mediterranean sapropels, but the greater geographical extent and longer duration (approx 46 kyr) of ocean anoxic event 1b suggest that processes leading to such ocean anoxic events in the North Atlantic and western Tethys were able to act over a much larger region, and sequester far more carbon, than any of the Quaternary sapropels. Source

Hothouse climate has been approached or achieved more than a dozen times in Phanerozoic history. Geologically rapid onset of hothouses in 104 –105 yr occurs as HEATT (haline euxinic acidic thermal transgression) episodes, which generally persist for less than 1 million years. Greenhouse climate preconditions conducive to hothouse development allowed large igneous provinces (LIPs), combined with positive feedback amplifiers, to force the Earth to the hothouse climate state. The two most significant Cenozoic LIPs (Columbia River Basalts and much larger Early Oligocene Ethiopian Highlands) failed to trigger a hothouse climate from icehouse preconditions, suggesting that such preconditions can limit the impact of CO2 emissions at the levels and rates of those LIPs. Human burning of fossil fuels can release as much CO2 in centuries as do LIPs over 104 –105 yr or longer. Although burning fossil fuels to exhaustion over the next several centuries may not suffice to trigger hothouse conditions, such combustion will probably stimulate enough polar ice melting to tip Earth into a greenhouse climate. Long atmospheric CO2 residence times will maintain that state for tens of thousands of years. Source