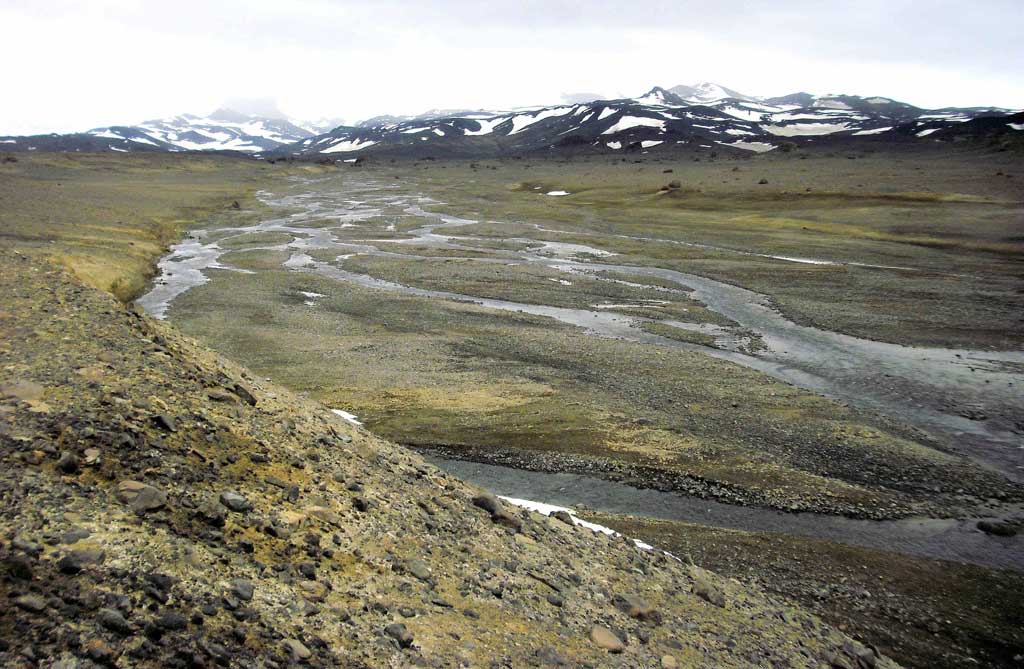 Glacier hydrology is the study of the flow of water through glaciers. It is a mysterious world, where water running on the surface of the glacier disappears through cracks and holes in the glaciers, and powerful rivers emerge from the glacier snout[1]. Beneath the Antarctic Ice Sheet, these subglacial drainage channels are connected to numerous subglacial lakes[2, 3].

In the next sections, we will discuss supraglacial, englacial and subglacial hydrology with particular reference to Antarctic glaciers.

Supraglacial (surface) water on a glacier is formed by the ice melting during the summer. It flows off the glacier, incising a number of cracks similar to an ordinary river system[1]. These channels are often sinuous, and the water can flow at rates of up to several metres per second.

Surface melt (ablation) occurs in the hard-packed snow (firn; the transitional state between snow and ice), and can pond above the impermeable ice. If the firn becomes saturated all the way to the surface, it becomes a ‘swamp zone’, with puddles of standing water. The swamp zone moves up glacier as the melt season progresses. The surface drains increasingly quickly as more ice is exposed, and the firn is filled with water[1]. In Greenland, large lakes form on the surface of the ice sheet during the summer. However, in Antarctica, much of this saturated firn refreezes, making little overall contribution to melt runoff[5]. Much of the meltwater runoff in Antarctica is restricted to coastal areas and ice shelves during the summer seasons. Saturated firn on ice shelves may facilitate ice shelf collapse[6]. See photographs of meltwater ponds on McMurdo Ice Shelf.

Structures in the ice produced by tension, such as crevasses, allow the water to penetrate into the ice. There are some great examples of this in Greenland, where large lakes can abruptly drain into the ice sheet. Moulins are vertical shafts cut by the water. Water cascades down these into the ice sheet. Despite the pressures within the ice sheet, moulins remain open by constant melting by the water[1]. Finally, there are numerous water pockets and channels within temperate ice sheets[4] and glaciers, where water can remain trapped for some time.

Subglacial hydrology is critically important in understanding the flow of Antarctic glaciers. Basal meltwater flows through large subglacial hydrological networks[7], which can impact glacial erosion and ice velocity. Some of these channels can be followed for hundreds of kilometres. There is evidence that this hydrological system is very variable, with changes within the glacier bed observed underneath Antarctic ice streams[8].

Meltwater reaches the base of ice sheets through basal melting from geothermal heating and by ice melting under pressure from the weight of the ice mass above. Secondly, downwards percolation and flow of supraglacial and englacial systems. There are several main aspects of the basal hydrological system. Firstly, water can be ponded in subglacial lakes. It can also flow through subglacial channels. R-Channels are incised upwards into the ice. Channels can also be incised into the bedrock or subglacial sediments (Nye channels).

The proglacial area of temperate glaciers is characterised by abundant meltwater runoff from the glacier. Often, this becomes impounded in the overdeepened glacier basin as a proglacial lake. Abundant meltwater can form large braided river plains, or sandur. Runoff is less in Antarctica, and meltwater in the northern Antarctic Peninsula tends to be restricted to small braided streams. These streams, which are part of the paraglacial environment, move and redeposit glacial sediments and rework glacial landforms.

Discovery: Process of ice mélange thinning suggests Antarctica’s ice-shelves could retreat Decades Earlier
October 3, 2021
Subscribe
0 Comments
Inline Feedbacks
View all comments
Go to Top
wpDiscuz
0
0
Would love your thoughts, please comment.x
()
x
| Reply
Cookie Consent
To provide the best experiences, we use technologies like cookies to store and/or access device information. Consenting to these technologies will allow us to process data such as browsing behavior or unique IDs on this site. Not consenting or withdrawing consent, may adversely affect certain features and functions. Learn more about the data usage on this website.
Manage options Manage services Manage vendors Read more about these purposes
View preferences
{title} {title} {title}
Loading Comments...