Cyclone Activity Has Been Intensified in the Arctic 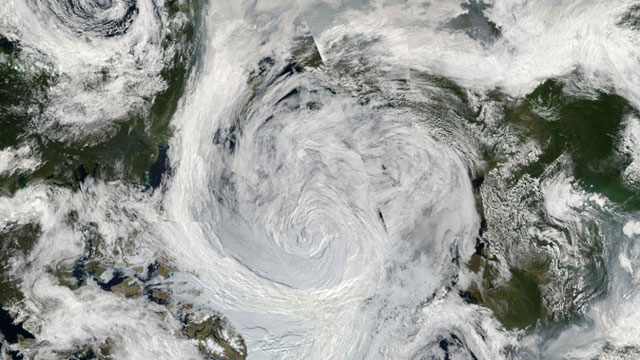 Cyclones are key weather elements that make a major contribution to climate trends and variability, and that also bring intense high-frequency changes in wind, temperature and precipitation.

The cyclones were detected in the NCEP/NCAR reanalysis for the period 1948Ŷ2002 by a modified automated identification and tracking algorithm. Our investigation indicates that Arctic cyclone activity increased during the second half of the 20th century, while midlatitude activity decreased from 1960 through the early 1990s. The number and intensity of cyclones entering the Arctic from the midlatitudes has increased, suggesting a shift of storm tracks into the Arctic. Positive tendencies of midlatitude cyclone activity before and after the 1960-1993 period of decreasing activity correlate most strongly with variations of cyclone activity in the North Atlantic and Eurasia. Our results also provide evidence of interactions between cyclone activity over the Arctic Ocean and the Arctic marginal zone, as well as evidence of significant interannual associations involving Arctic cyclone activity, the NAO, and the regime alternation of Arctic sea-ice and ocean motions. Source Jamstec.Go.Jp