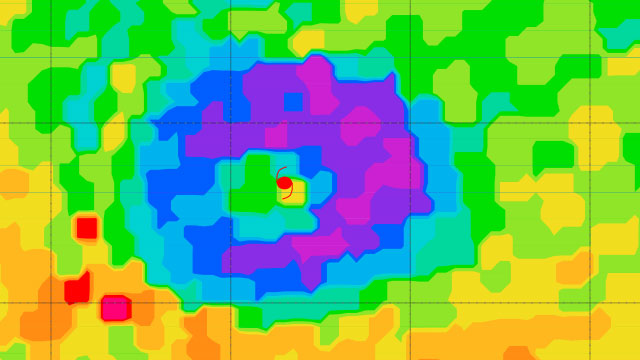 Zou and Wu noticed that over 100 miles, the area of a hurricane typically has low levels of ozone from the surface to the top of the hurricane. Whenever a hurricane intensifies, it appears that the ozone levels throughout the storm decrease. When they looked at the storm with ozone data a hurricane’s eye becomes very clear. Because forecasters always try to pinpoint the eye of the hurricane, this knowledge will help with locating the exact position and lead to better tracking.The National Oceanic and Atmospheric Administration’s National Hurricane Center (NHC) is the agency that issues hurricane forecasts. Out of the 12 storms analyzed, the ozone data and the NHC official report differed on the mean distance between the estimated eye by less than 18 miles during the most intense stage of the storms. As such, when Zou and Wu added the satellite observed ozone levels around a hurricane into a computer forecast model, it greatly improved the predicted track that the hurricane would take.

“This research highlights the benefits of Total Ozone Mapping Spectrometer (TOMS) data in hurricane track and intensity prediction, an important forecasting problem since hurricanes strike regions of high population and property growth, resulting in large natural disasters,” said Zou. The other interesting finding when analyzing ozone data around hurricanes, is that ozone levels give a clue that a storm will develop before other methods. The early spin of a tropical cyclone is weak and sometimes covered by clouds, and not easily detected by satellites that provide pictures of clouds. The ozone data gives scientists a “look beyond the clouds.”

Ozone is all around the world and in the upper and lower atmosphere. Ozone in the upper atmosphere protects life on Earth from harmful ultraviolet rays from the sun, which can cause sunburn and skin cancer. Ozone close to the surface is a pollutant, which on hot, humid days with little wind creates a haze, such as that over big cities, that is harmful to breathe. By using NASA’s satellite Earth Probe/ TOMS total ozone data, forecasters can identify ozone amounts that are closely related to the formation, intensification, and movement of a hurricane. Zou and Wu also found a strong relationship between ozone, air pressure and spin within the hurricanes. Zou said that the connections between ozone levels and hurricane behavior are a very important step in understanding the storms. Source