Pakistan Floods: Hundreds dead and millions are without shelter 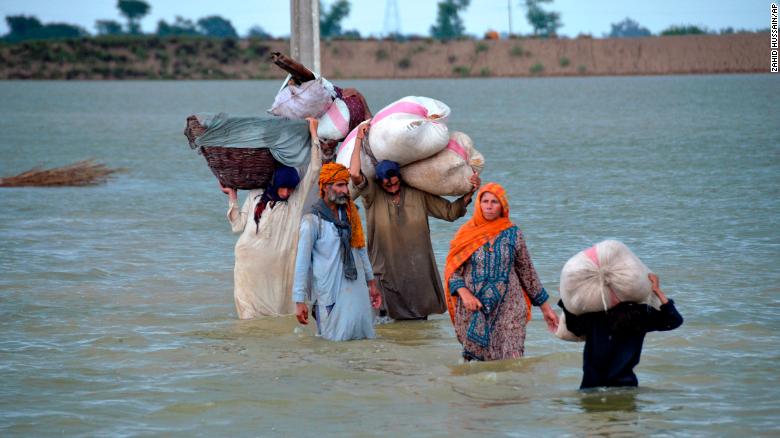 Al Jazeera: Islamabad, Pakistan – The government has declared devastating floods a “national emergency” after nearly 1,000 people died and more than 30 million are without shelter as monsoon rains continue to lash the South Asian nation.

At least 937 people have died since mid-June, including 343 children, according to the National Disaster Management Authority (NDMA), with large swaths of the southwestern province of Balochistan remaining submerged, bringing back the memory of the devastating 2010 floods.

CNN: Sherry Rehman, the minister for climate change, called the floods “unprecedented” and “the worst humanitarian disaster of this decade.”

“Pakistan is going through its eighth cycle of monsoon while normally the country has only three to four cycles of rain,” Rehman said. “The percentages of super flood torrents are shocking.”

She highlighted in particular the impact on the south of the country, adding that “maximum” relief efforts are underway.

The NDMA, Pakistani Army, and the Provincial Disaster Management Authority are working to assist those affected — but there is a “dire” need for shelter and relief due to the rising number of homeless and displaced families, she said.

The southern province of Sindh, which has been badly hit by the flooding, has asked for 1 million tents, while neighboring Balochistan province — largely cut off from electricity, gas and the internet — has requested 100,000 tents, she added.

“Pakistan’s priority, at the moment, is this climate-induced humanitarian disaster of epic proportions,” Rehman said, urging the international community to provide aid given Pakistan’s “limited” resources.

On Friday, Pakistan’s Prime Minister Sharif briefed international diplomats on the crisis, stating that his country — on the frontline of climate change despite a relatively small carbon footprint — must focus its rehabilitation toward greater climate change resilience.

Minister for Planning and Development Ahsan Iqbal separately told Reuters that 30 million people had been affected, a figure that would represent about 15% of the South Asian country’s population.

UN agency Office for the Coordination of Humanitarian Affairs (OCHA) said in an update on Thursday that the monsoon rains had affected some 3 million people in Pakistan of which 184,000 have been displaced to relief camps across the country.

The NDMA said in a report that in the past 24 hours, 150 kilometers (about 93 miles) of roads had been damaged across the country and more than 82,000 homes partially or fully damaged.

Since mid-June, when the monsoon began, more than 3,000 kilometers (1,864 miles) of road, 130 bridges and 495,000 homes have been damaged, according to NDMA’s last situation report, figures also echoed in the OHCA report.

A vast majority of this damage is in Sindh.

“Brother, the rain has not stopped for the past three months … We are living in a rickshaw with our children because the roof of our mud house is leaking,” a woman who declined to be named told Reuters TV in Hyderabad, Sindh’s second-largest city.

Seated with three of her children in the rickshaw she said: “Where can we go? The gutters are overflowing, and our courtyard is filled up with sewage. Our houses and alleys have turned into a floating garbage bin.”

OCHA also warned that alerts had been issued for floods, river overflows, and landslides in several areas of Pakistan, and heavy rainfall was forecast for the next two days, too, over most of the country.

Another of the hardest-hit areas has been in nearby Balochistan, with the province’s capital city Quetta largely cut off from electricity, gas, and the internet.

Almost 500% more rainfall had fallen in the province, Rehman added, leading to electricity and gas services being suspended in most areas of Quetta since Thursday morning, according to the Provincial Disaster Management Authority.

Severe disruption to cell, internet, and landline phone services in the city have caused problems to rescue operations, leading the Balochistan government to request the Pakistan army’s help in rescue efforts.