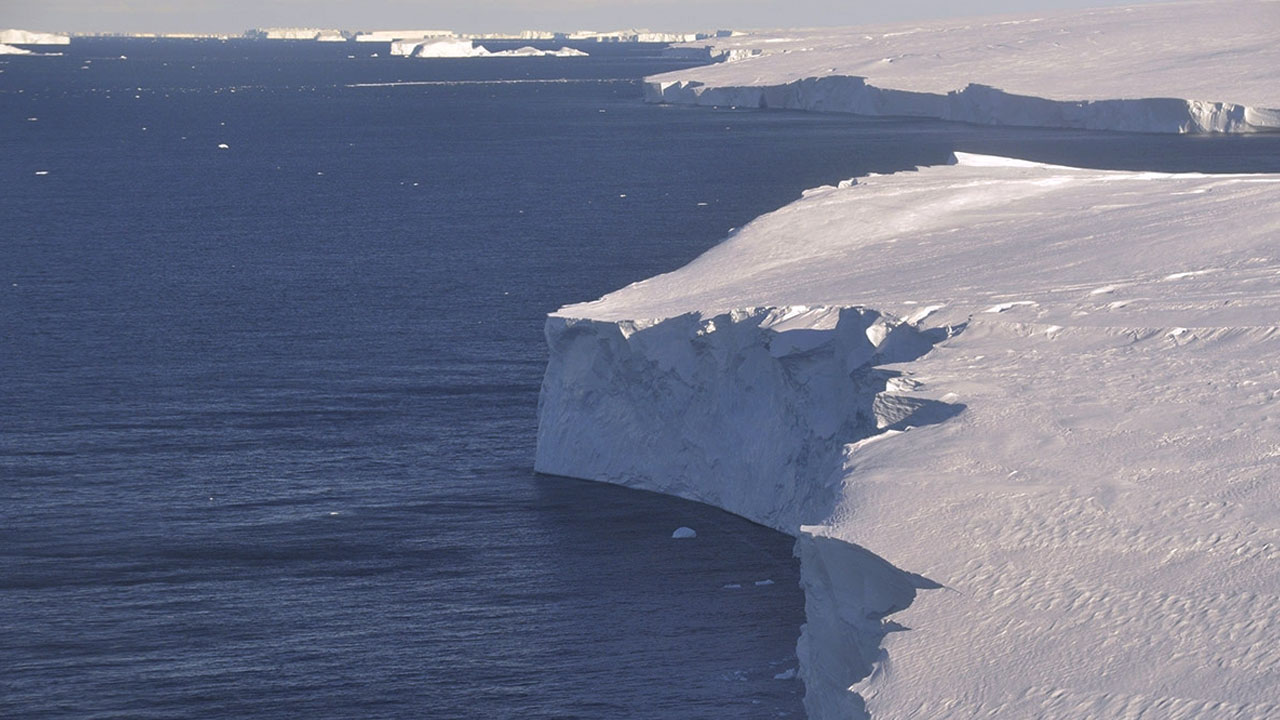 At the fall 2021 meeting of the American Geophysical Union on 13 December, a presentation on the latest for the Thwaites Glacier (also dubbed the Doomsday Glacier) highlighted processes at the ice shelf of the glacier, which will likely result in dramatic changes within 10 years.

Meaning, acceleration of ice discharge into the Ocean, and the subsequent contribution to sea level rise – affecting all coasts around Earth. Results suggest the floating ice shelf could shatter within the next five years, making room for the land based glacier moving rapidly into the Ocean.

Thwaites is currently responsible for about 4% of global annual sea level rise, with the ice shelf lost this could result in an increase of up to 25%. This conclusion for the ice shelf comes from satellite images which recently detected fissures on the surface, and a major fracture across the entire shelf.

Eric Rignot: “To place the collapse of ice shelves into perspective, in 1995 and in 2002 we observed glaciers to speed up by a factor 3 to 8 when they lost their protective ice shelves.

If the same held true for other, larger ice shelves further south in Antarctica, it would have disastrous consequences for sea level rise. Essentially sea level would rise 3 to 8 times faster than at present.”

Processes which threaten Thwaites Glacier are primarily driven by hotter ocean temperatures, fueled in part by human-caused climate change, eroding the ice shelf from underneath.

CNBC: Ice loss in Antarctica has been growing worse in recent years and research suggests that a dangerous amount of sea level will occur if global warming reaches about three degrees Celsius (5.4 degrees Fahrenheit) above preindustrial levels. The Earth has already has surpassed one degree Celsius of warming.

The cracks in the Antarctic ice shelf are similar to those in a car windshield, where a slowly growing crack reveals that the windshield is weak and a slight bump to the vehicle could prompt the windshield to immediately break apart into hundreds of pieces of glass, according to Oregon State University glaciologist Erin Pettit.

During the meeting, the scientists said they’ve targeted the weak and strong parts of the shelf and concluded that fractures will take a “zig-zag” pathway through the ice and ultimately cause the shelf to break in as little as five years.

Global sea levels will rise two to six feet by 2100 on the current trajectory, driven mainly by melting in Greenland and Antarctica, according to NASA satellite data. However, scientists have warned that projections underestimate the impact of climate change on sea level rise.