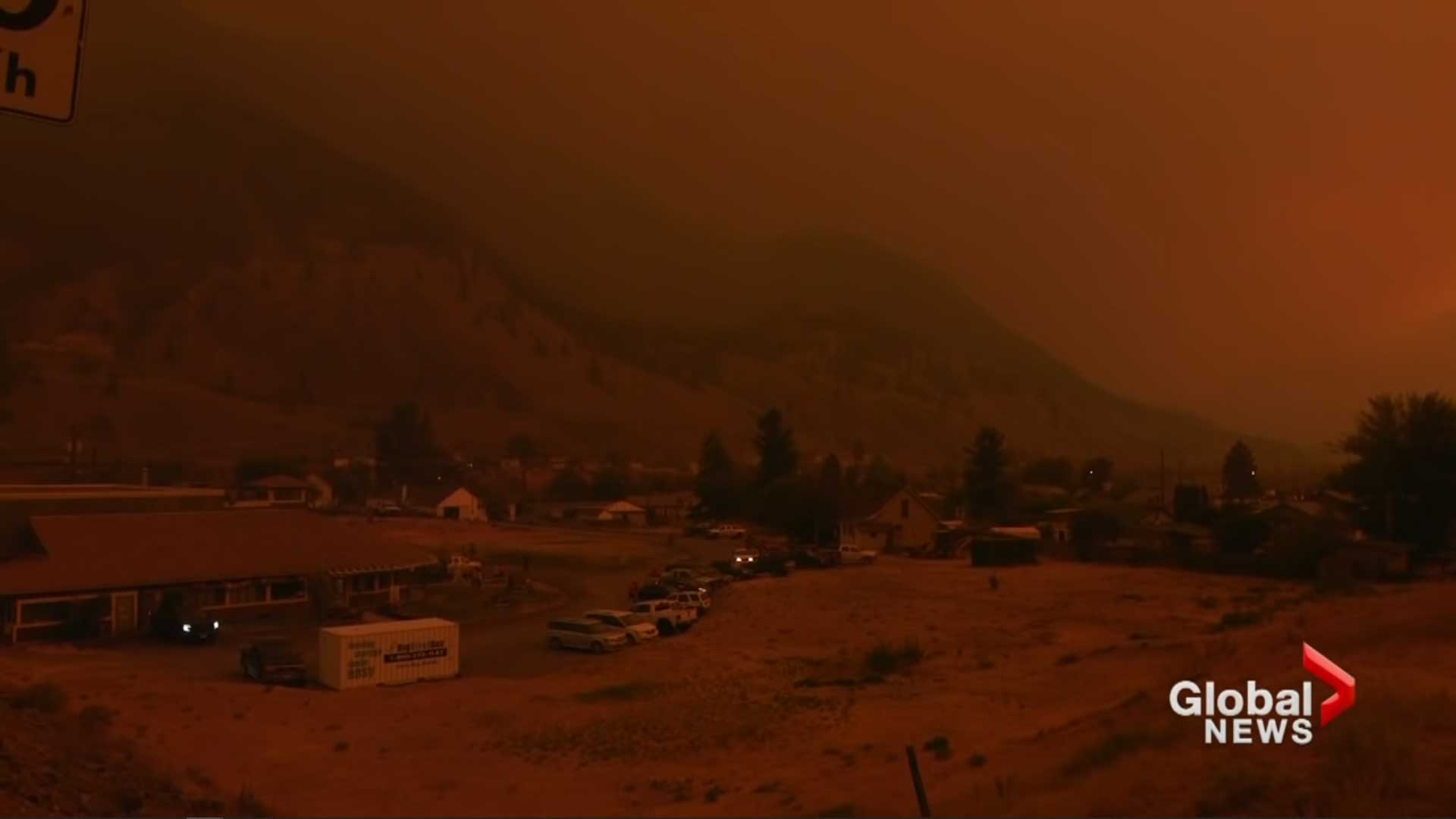 Global News: Several buildings have been destroyed in Lytton, B.C. after a fast-moving fire swept through the village Wednesday just moments after its residents were evacuated.

Sources tell Global News the local ambulance station, clinic and at least 10 houses were among the buildings burned to the ground shortly after Mayor Jon Polderman issued the evacuation order around 6 p.m. PT.

An unknown number of injured residents were taken out of the village by SUV ambulance, while the rest of the residents were sent to evacuation centres in nearby Merritt and Lillooet, emergency crew sources said.

The evacuation order came after the village shattered the record for the highest temperature ever recorded in Canada for three consecutive days.

Gizmodo: The residents of Lytton, British Columbia were ordered to evacuate after wildfire engulfed the region on Wednesday. The village of roughly 350 people also broke Canada’s record for the highest temperature on Tuesday, a whopping 121.2 degrees Fahrenheit (49.6 degrees Celsius). It was the third day in a row that Lytton experienced over 121 degrees in what has been a record-setting heat wave for the Pacific Northwest.

“It took a whole 15 minutes from the first sign of smoke to, all of a sudden, there being fire everywhere,” the mayor of Lytton, Jan Polderman, told CBC News late Wednesday.

Lytton had been surrounded by two fires earlier in the week, but the fire that overtook the town on Wednesday was an entirely new wildfire, according to Canada’s Global News. It’s unclear what started the fire, but smoke has fueled thousands of lightning strikes in the region.

“The ambulance center is gone, the medical center… the whole Main Street is pretty much toast. So we don’t have a whole lot to go back to,” one resident who was able to escape to the nearby town of Merritt told Global News.

Wikipedia: In British Columbia, 103 more deaths than expected in a four day period were referred to the coroner up to June 29, with the number rising to 321 the following day.

The heat wave caused rapid snowmelt of some of the Rocky Mountains snowcaps, which triggered a week-long evacuation order in the Pemberton Valley due to rising water levels; extreme water rises were also noted in Squamish, British Columbia and alerts issued in other places in the province. It has also made electricity demand soar to levels never seen before – BC Hydro reported consumption levels reaching 8,500 MW, while AESO, the Albertan electricity regulator, noted demand inching towards an all-time high (11,721 MW), which prompted the operator to formally ask consumers to conserve energy. Additionally, Beaumont issued a mandatory ban on non-essential water usage, citing drought conditions.

The extreme heat led to exceptionally dangerous wildfire conditions, which led Mike Flannigan, a University of Alberta wildfire scientist, to say that the summer fire season could be “horrific” if the extreme conditions persisted. At least 19 wildfires ignited between June 27 and 29, but most remained under 5 hectares (12 acres); one fire, however, grew to at least 2 km2 (0.77 sq mi) by June 29, prompting evacuations. On June 30, further orders were given, when two large fires spread out of control – the one near Kamloops Lake grew to 200 km2 (77 sq mi) as of the evening of June 30, and the other one, north of Lillooet, has similarly measured tens of square kilometers. In addition to that, pyrocumulus clouds that were formed due to the extensive burning have produced several hundred thousand lightning strikes, which are set to further complicate efforts to contain fires.

In the evening the same day, Lytton, the settlement that had been beating national heat records in the previous days, along with several First Nations reserves, were ordered to be evacuated as a wildfire was approaching to the village, where it later has done widespread destruction to the buildings, which a local MP, Brad Vis, has estimated at 90% and damaged roads, telecommunication and power facilities as well as the railway that comes through the settlement; at least two people died while hiding from the flames. The fire in the settlement has forced closure of a section of British Columbia Highway 1, part of Trans-Canada Highway, as well as Highway 12, which ends in Lytton.

Agriculture has also seen losses: raspberry farms in the Lower Mainland and lettuce producers in the Okanagan Valley were reported to be struggling with spoilt crops, while in southern Alberta, the heat has set fire to the wheat fields in some places, which, combined with a severe drought in the province, has put the harvest in jeopardy