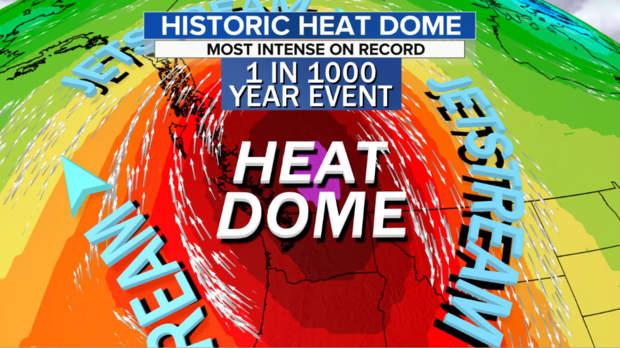 The U.S. west coast, and parts of Canada currently experience an off the charts heat wave. This is a developing story, the heat is forecasted to persist for several days, hence we will continue to update this article.

CBS News: The heat wave baking the U.S. Pacific Northwest and British Columbia, Canada, is of an intensity never recorded by modern humans. By one measure it is more rare than a once in a 1,000 year event — which means that if you could live in this particular spot for 1,000 years, you’d likely only experience a heat dome like this once, if ever.

This heat wave comes on the heels of another historic heat wave less than two weeks ago that baked the U.S. Intermountain West, Desert Southwest and California with hundreds of record highs.

Meanwhile, the Eastern U.S. is also seeing the heat ratchet up, with feels like temperatures pushing 100 degrees by Monday and Tuesday in the major cities of the I-95 corridor.  The back to back and dueling heat waves are made more likely by a very wavy jet stream and our unnaturally heating climate.

Watch the CBS segment covering the weather currently baking the U.S. and parts of Canada, Pacific Northwest bakes under once in a millennium heat dome.

SFGate: But just what is a heat dome?

It’s a term used to describe a weather phenomenon that, in a nutshell, is an enormous bubble of hot air. The National Weather Service offers this more detailed explanation: “A heat dome occurs when high pressure in the upper atmosphere acts as a lid, preventing hot air from escaping,” the National Weather Service explains. “The air is forced to sink back to the surface, warming even further on the way.”

Heat domes are particularly troublesome because they are self-perpetuating: As the temperatures increase, the dome’s impenetrability does, too. The heat dome prevents clouds and storms from forming, and many times the dome will be fairly stationary. This creates multiple days of hot weather, and that’s what’s happening in the Pacific Northwest right now.

CBS News: For the past week, as computer models have consistently forecast seemingly unbelievable numbers, meteorologists struggled to grasp how a heat wave of this magnitude could even be possible, given this region has never experienced anything of this magnitude before. Were the models wrong? Or, given climate change, should we now expect the unexpected — is this now just becoming routine?

Turns out, the models were correct and we should expect extreme heat waves, even unprecedented ones like this to become more routine. “There is no context really, in the sense that there is no analog in our past for what we are likely to see this week,” says Dr. Michael Mann, Distinguished Professor of Atmospheric Science at Penn State and author of the new book The New Climate War.

But calling it a new normal does not suffice says Mann, “Some people called this a ‘new normal. But it is worse than that,” explained Mann. “We will continue to see more and more extreme heat waves, droughts, wildfires and floods as long as we continue to warm the planet through fossil fuel burning and carbon emissions.”

Along with a more wavy, buckling and slow-moving jet stream, comes a phenomena called “blocking”. This is when waves in the jet stream become so elongated that they break off, sit and spin. In this case there is a textbook type of block called an Omega block over the Pacific Northwest because it looks like the Greek letter Omega. Inside this Omega, the heat pools and intensifies.

There is a faction of climate scientists who believe that a warming climate — specifically the Arctic — results in a more wandering jet stream at certain times of the year. But it is hotly debated – there is an equal amount of research that does not arrive at this conclusion.

Mann and his colleagues have been involved in some of this research, in which he finds that a specific type of Northern Hemisphere blocking — what he calls Quasi Resonant Amplification — will increase by 50% this century under business as usual human-forced climate warming. “I do indeed believe that the phenomenon we describe in our work played a very important role in the record heat wave,” Mann said.

As for the lack of consensus in the climate research on the wavy jet stream and blocking, Mann thinks it has more to do with the current state of climate modeling “This is an area where current generation models are NOT capturing a real-world climate connection,” Mann explained.

Whatever the cause, the result of an extreme jet stream pattern, is extremes across many parts of the nation and globe. Over the past few days, the central U.S. has seen over a foot of rain with flash flooding along a stalled front. And, starting on Sunday and continuing through most of the upcoming week, the major East Coast cities will also sweat through a heat wave —  although not nearly as intense — with feels like temperatures near 100 degrees from Washington D.C. to Philadelphia and New York City.

While natural swings between hot and cold patterns will continue, the trend is clear — extreme heat waves are bound to become more common, more extreme and more deadly in the coming years. In practice, the solution to worsening extreme weather is a herculean challenge for humanity, but in theory it is simple: “We can prevent things from getting worse if we rapidly decarbonize our civilization,” Mann said.

From June 28th 2021: Now if you browse at Google News the record shattering heat is not a top story, absent. If we navigate to the U.S. section, the heat wave is listed as the 6th entry.

Also at the now paywalled New York Times, and at CNN. Update, The New York Times updated their article later mentioning the climate.

In case you didn’t know, Google YouTube last year “terminated” our video channel, even when it was in good standing, meaning there were no violations brought to our attention that our content was not in compliances with their rules. At the same time climate denier channels are allowed to continue to cast doubt on the sciences.