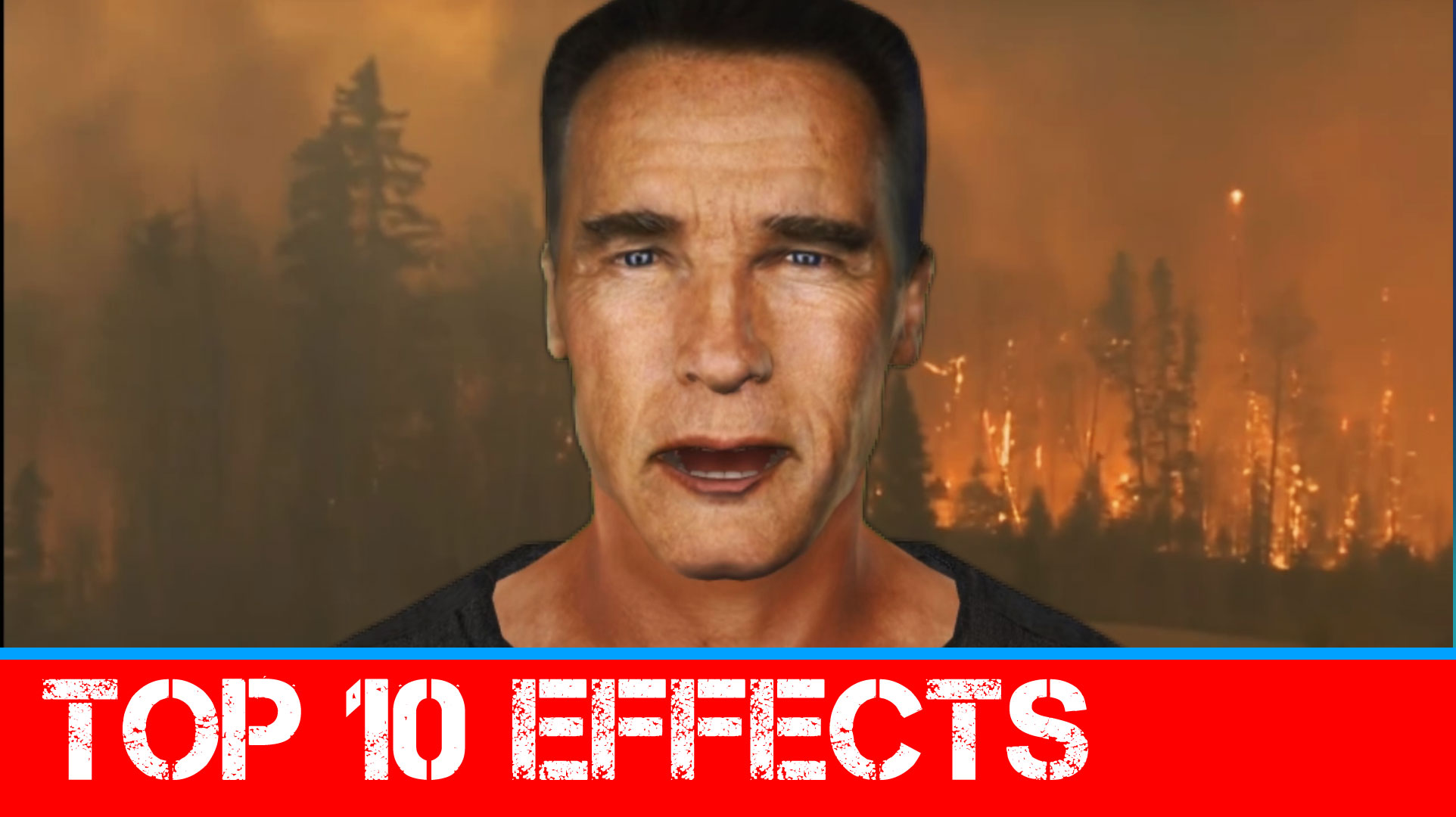 9 Wildfire
Are fires affected by climate change? The answer is simple, yes. Of course. A warming climate affects fire. Warming temperatures dry out land, making it all more flammable.
The number of large forest fires in the western United States has increased over 500%, the burned area over 1000%, since the 1970s and early 1980s. In some areas, the increase is much larger: area burned in northern US Rockies forests has increased 3000%. In Pacific north-west forests, 5000%.
With warmer temperatures, evaporation increases. The atmosphere draws more moisture from soils, and from the live and dead vegetation that, drier than it used to be, helps fuel fires.

8 Drought
Droughts have been drier and lasting longer in recent years. With higher air temperatures many regions in the world are experiencing, drier air, and more severe or frequent drought conditions.
With air temperatures increasing, more moisture evaporates from land and water bodies, affecting plant life and can reduce rainfall even more, and when it rains in drought-stricken areas,
the drier soils are less able to absorb the water, increasing the likelihood of flooding. And drought conditions make wildfires more likely.

7 Floods
Earth’s lower atmosphere is becoming warmer and moister, as a result of human emitted greenhouse gases.
When warm air holding moisture meets cooler air, the moisture condenses into tiny droplets and when heavy enough, they fall as precipitation.

Thus, more energy for storms and certain severe weather events, leading to heavier rainfall and snowfall events, increasing the risk of flooding.
Scientists expect the amount of rainfall during the heaviest precipitation events to increase more than 40 percent by the end of the century.

Direct – “Acute or traumatic effects of extreme weather events and a changed environment”
Indirect – “Threats to emotional well-being based on observation of impacts and concern or uncertainty about future risks”
Psychosocial – “Chronic social and community effects of heat, drought, migrations, and climate-related conﬂicts, and postdisaster adjustment”
Consequences of psychosocial impacts caused by climate change include: increase in violence, intergroup conflict, displacement and relocation and socioeconomic disparities. Based on research, there is a causal relationship between heat and violence and that any increase in average global temperature is likely to be accompanied by an increase in violent aggression.
http://psycnet.apa.org/journals/amp/66/4/265/

A warming climate is helping fuel more disease outbreaks
In 2015 The Lancet brought together the world’s leading experts on environmental health. They argue that “the implications of climate change for a global population of 9 billion people threatens to undermine the last half century of gains in development and global health,” including the spread of disease vectors.

Zika, dengue, and chikungunya are all spread by the Aedes mosquito. And one of the reasons researchers think Aedes may be reaching new places —and more people — is because Mosquitoes thrive in warm and moist environments.

The situation is similar for the spread of Bird flu, cholera, or Lyme disease — researchers believe all are being made worse in a warmer world.
http://www.vox.com/2016/5/31/11638796/why-there-are-more-infectious-disease-outbreaks

5 Conflicts
Conflicts linked to, or arising from a lack to access water resources or the ability to feed, are likely to increase with more scarcity. This could happen for various reasons, such as impacts on crops, through extensive drought conditions or other weather extremes, shifts in weather patterns – for instance unseasonal precipitation, or change in freshwater availability from glacier melt. People will also migrate to seek better living conditions.
In a report from 2014 The Pentagon noted: The pressures caused by climate change will influence resource competition while placing additional burdens on economies, societies, and governance institutions around the world. These effects are threat multipliers that will aggravate stressors abroad such as poverty, environmental degradation, political instability, and social tensions – conditions that can enable terrorist activity and other forms of violence.

4 Temperature
Increasing temperatures will shrink the polar ice caps, make large areas of the Middle East and North Africa unbearable to live in and accelerate what’s known as Earth’s “sixth mass extinction” of animal species.
The increasing pace of warming means that the world will heat up at a rate “at least” 20 times faster than the historical average over the coming 100 years, according to Nasa. This means that todays climate change is on steroids, when compared to past changes in the climate system.
And we cannot just dial the temperature back, since carbon dioxide remains thousand years in the atmosphere.
https://www.theguardian.com/environment/2016/aug/30/nasa-climate-change-warning-earth-temperature-warming

3 Feedbacks
Immense reserves of methane exist in clathrate formations on continental seabeds or under ice sheets and given certain changes to sea temperature and or pressure, gigatons of methane could be released in sudden bursts from these crystalline sources, undercutting human efforts to slow greenhouse gas emissions and possibly sparking abrupt climate changes.

A positive feedback loop created by the conditions of increased warming in regions like the Arctic, leads to a chronic release of carbon and methane from thawing permafrost or peat bogs, which in turn results in accelerating human caused warming.

2 The Ocean
Changes in the ocean are happening between 1.5 and 5 times faster than those on land. And with more warming the Ocean’s biological pump could increase outgassing of CO2 to the atmosphere.
There is evidence for substantial global decline in oceanic dissolved oxygen with regions of low oxygen waters coming closer to the surface, and expanding in size.
These low oxygen zones can create a situation when nitrous oxide is produced, a greenhouse gas 310 times more potent than carbon dioxide.
This Oxygen-starved ocean is a toxic environment for most marine life, including fish.

Warming of the Ocean reinforces ocean acidification (decrease in PH), organisms that have shells or skeletons being especially vulnerable.
Additional, ocean acidification might amplify global warming, reducing the production by phytoplankton of dimethylsulphide (DMS), the largest natural source of sulphur to the atmosphere, a particulate responsible for cloud formation.
Phytoplankton, are generally declining, through reduction of available nutrients (stratification), and decreasing microbial metabolic rates.

Rising temperatures have led to a global increase in evaporation and humidity, intensifying the hydrological cycle, affecting weather worldwide.

1 Sea Level Rise
Current estimates about future sea level rise, consider up to 10 feet already locked in, due to the greenhouse gas emissions we have emitted so far. How fast this will happen is not certain yet. However, some scientist argue for a 10 feet of sea level rise as soon as in the next 50 years, the reason why NASA has launched the new operation Oceans Melting Greenland (OMG), to assess how fast the Arctic is melting, and just how much the sea level will rise as a result. Together, the Greenland and Antarctic ice sheet hold about 200 feet of sea level rise.
Risings seas will virtually affect everybody, including power plants, infrastructure, property, food production, entire populations living on low lying lands. And then the question what happens with all the flooded land, with all the stuff we built there, or put there, things like landfills, dump sites, and all the things which will begin to rot once submerged.