Heat Waves to Become Much More Frequent and Severe 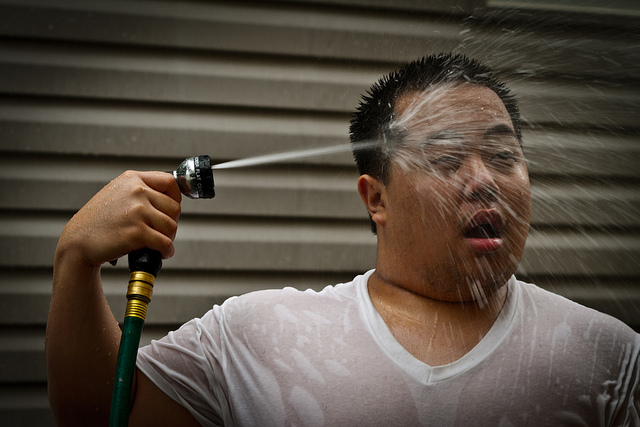 Science Daily Aug. 15, 2013 — Climate change is set to trigger more frequent and severe heat waves in the next 30 years regardless of the amount of carbon dioxide (CO2) we emit into the atmosphere, a new study has shown.

Extreme heat waves such as those that hit the US in 2012 and Australia in 2009 — dubbed three-sigma events by the researchers — are projected to cover double the amount of global land by 2020 and quadruple by 2040.

Meanwhile, more-severe summer heat waves — classified as five-sigma events — will go from being essentially absent in the present day to covering around three per cent of the global land surface by 2040.

The new study, which has been published on 15 August, in IOP Publishing’s journal Environmental Research Letters, finds that in the first half of the 21st century, these projections will occur regardless of the amount of CO2 emitted into the atmosphere.

Lead author of the study, Dim Coumou, from the Potsdam Institute for Climate Impact Research, said: “We find that up until 2040, the frequency of monthly heat extremes will increase several fold, independent of the emission scenario we choose to take. Mitigation can, however, strongly reduce the number of extremes in the second half of the 21st century.”

“A good example of a recent three-sigma event is the 2010 heat wave in Russia, which expanded over a large area stretching from the Baltic to the Caspian Sea. In the Moscow region the average temperature for the whole of July was around 7°C warmer than normal — it was around 25°C. In some parts, temperatures above 40°C were measured,” continued Coumou.

In their study, Dim Coumou, from the Potsdam Institute for Climate Impact Research, and Alexander Robinson, from Universidad Complutense de Madrid, used state-of-the-art climate models to project changes in the trend of heat extremes under two future warming scenarios — RCP2.6 and RCP8.5 — throughout the 21st century. The historic period was also analysed, and the results showed that the models can accurately reproduce the observed rise in monthly heat extremes over the past 50 years.

Co-author of the study, Alexander Robinson, said: “Our three- and five-sigma thresholds are defined by the variability a region has experienced in the past, so the absolute temperatures associated with these types of event will differ in different parts of the world. Nonetheless these events represent a significant departure from the normal range of temperatures experienced in a given region.”

According to the research, tropical regions will see the strongest increase in heat extremes, exceeding the threshold that is defined by the historic variability in the specific region. The results show that these changes can already be seen when analysing observations between 2000 and 2012.

“Heat extremes can be very damaging to society and ecosystems, often causing heat-related deaths, forest fires or losses to agricultural production. So an increase in frequency is likely to pose serious challenges to society and some regions will have to adapt to more frequent and more severe heat waves already in the near-term,” continued Coumou.