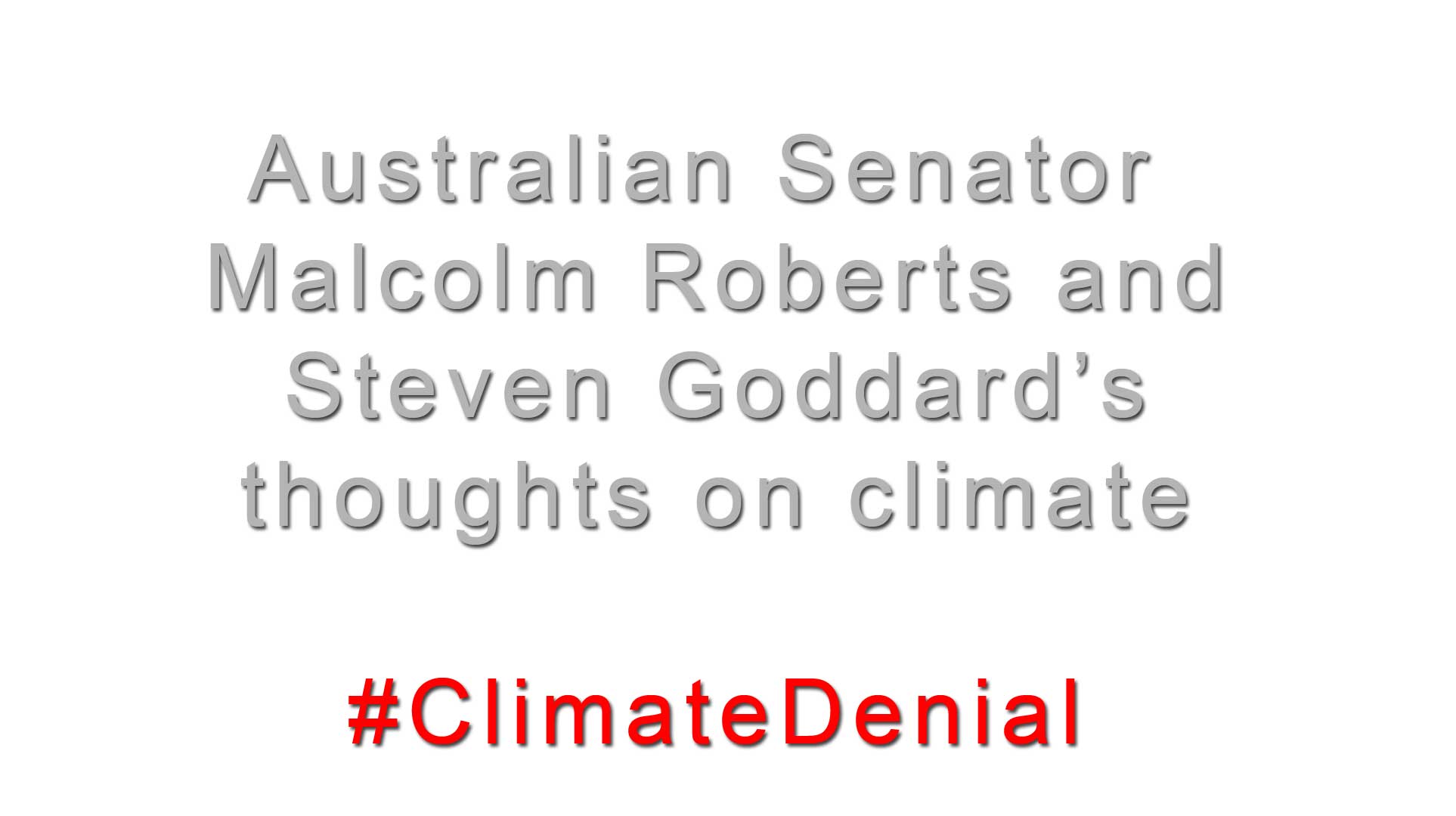 The Australian Senator Malcolm Roberts recently claimed on a ABC television show to the audience that there is a pause in global warming, and added that NASA manipulates their data. He then went on to argue that there is no evidence. Roberts refers to a blogger called Steven Goddard aka Tony Heller, who has no scientific background, but ties to the oil and gas industries (Hearthland Institute).

Goddard is known for a 2008 article in The Register where he posited that Arctic Sea ice is not receding and claimed that data from the National Snow and Ice Data Center (NSIDC) showing the opposite was incorrect. Goddard later issued a retraction on his statement. [3], [4]

“I completely agree with Fred [Singer] that there probably has been little or no warming since the 1940s.” [14]

“The Arctic did not experience the meltdowns forecast by NSIDC and the Norwegian Polar Year Secretariat. It didn’t even come close. Additionally, some current graphs and press releases from NSIDC seem less than conservative. There appears to be a consistent pattern of overstatement related to Arctic ice loss.” [3]

The October, 2014 email was leaked to journalists before the documentary was released. “Can I sue for damages?” Singer asked in the email. “Can we get an injunction against the documentary?”

InsideClimate News reports in their article “Leaked Email Reveals Who’s Who List of Climate Denialists,” how “Many of those copied on the email thread, such as Singer and communications specialist Steven Milloy, have financial ties to the tobacco, chemical, and oil and gas industries and have worked to defend them since the 1990s.”

The Who is Who network of climate skeptics

Who do you trust, Goddard with ties to special interests who creates doubt on climate science, ignores empirical data, observations, and facts or the actual people, the scientists who study climate. Meanwhile global temperatures keep climbing, below a graph from the Japan Meteorological Agency, does this look like a pause, or is this also part of Steven Goddard‘s conspiracy?

Fact Checker: Did Temperatures in France set a new Record with 50C/122F back in 1930?
June 30, 2019
Subscribe
0 Comments
Inline Feedbacks
View all comments
Go to Top
wpDiscuz
0
0
Would love your thoughts, please comment.x
()
x
| Reply
Cookie Consent
To provide the best experiences, we use technologies like cookies to store and/or access device information. Consenting to these technologies will allow us to process data such as browsing behavior or unique IDs on this site. Not consenting or withdrawing consent, may adversely affect certain features and functions. Learn more about the data usage on this website.
Manage options Manage services Manage vendors Read more about these purposes
View preferences
{title} {title} {title}
Loading Comments...