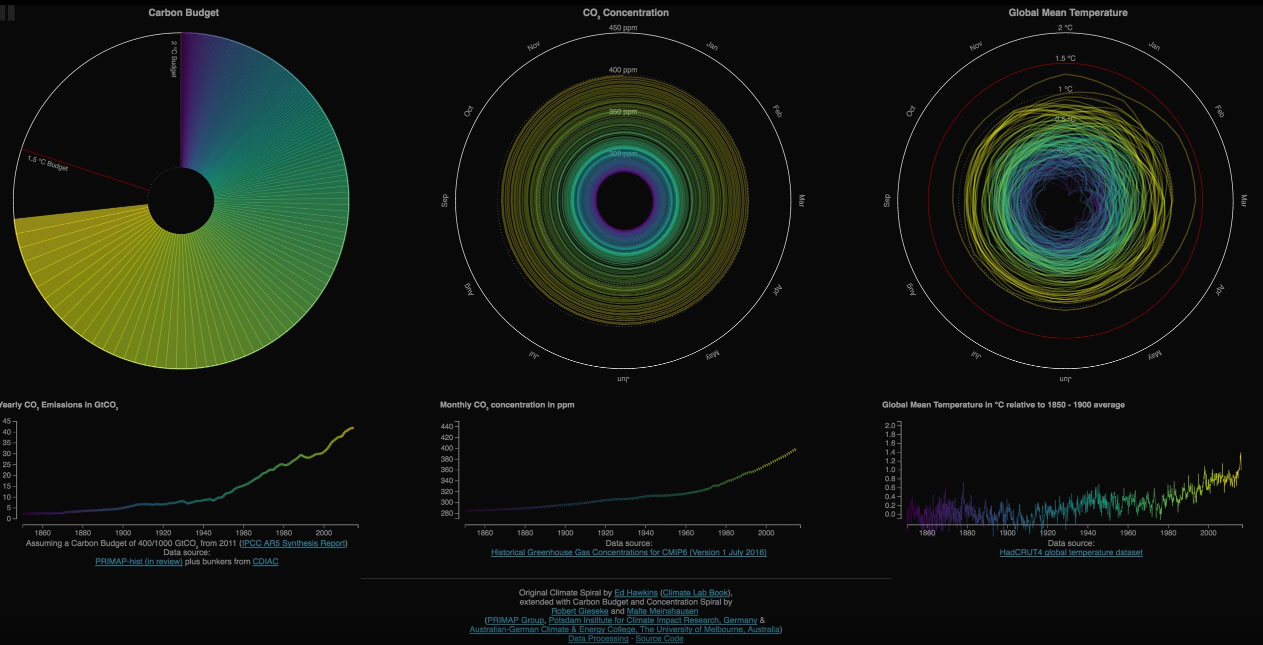 07/27/2016 – Global-mean temperatures are breaking one record after the other since instrumental observations began. Driven by burning of fossil fuels and deforestation, carbon dioxide concentrations have also soared to unprecedented levels. In fact, today’s CO2 concentrations are higher than they have ever been over the last 800 thousand years. Scientists from the Potsdam Institute for Climate Impact Research PIK and the University of Melbourne now put all these elements together to provide a set of new interactive Climate Spiral visualizations.

From global mean temperatures to CO2 concentration and the carbon budget left to keep global warming “well below 2°C” – based on Ed Hawkin’s viral Climate Spiral, Malte Meinshausen from Melbourne and Robert Gieseke from PIK developed a new cutting-edge set of climate spirals on global warming as a comprehensive addition to the climate spiral family.

The main point is that the temperatures do not spiral out of control, even though that is what it looks like, the scientists highlight: “We control those temperatures. The more fossil fuels we burn, the warmer it is going to get. Thus, we used the graphical language of the spirals to show that cause-effect chain from emissions to concentrations to temperatures. If we want to keep warming below a certain temperature level, like 1.5°C or 2°C, we need to keep the cumulative CO2 emissions in check. And yet, with ever bigger steps, we race towards trashing those carbon budget limits.”

Prince Charles Urges Action On Climate Change At G-7
June 12, 2021
Subscribe
0 Comments
Inline Feedbacks
View all comments
Go to Top
wpDiscuz
0
0
Would love your thoughts, please comment.x
()
x
| Reply
Cookie Consent
To provide the best experiences, we use technologies like cookies to store and/or access device information. Consenting to these technologies will allow us to process data such as browsing behavior or unique IDs on this site. Not consenting or withdrawing consent, may adversely affect certain features and functions. Learn more about the data usage on this website.
Manage options Manage services Manage vendors Read more about these purposes
View preferences
{title} {title} {title}