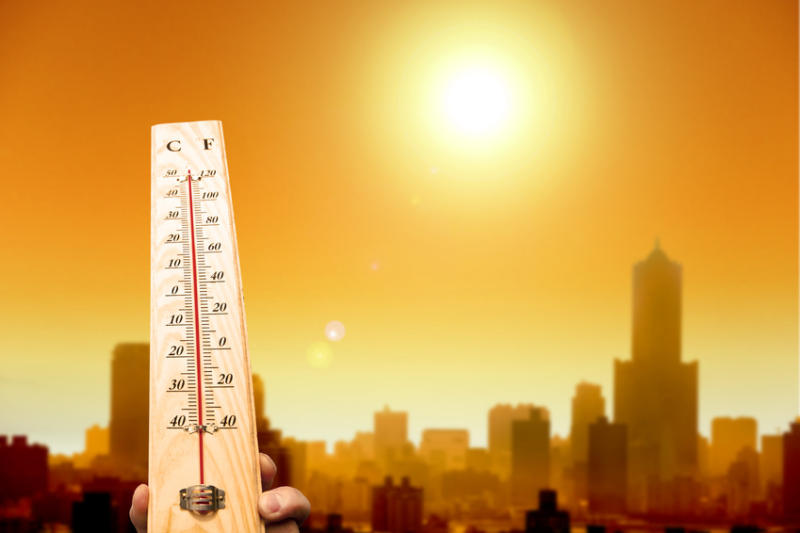 While summer currently gears up, during exceptional continued record global warming, temperatures are set to reach the highest so far this summer in many parts of the northern hemisphere – within the next few day’s (Germany, U.S. etc). Here we look at the past 2003 heat wave and what attributed to excess deaths during that extensive heat period in Europe. The point is to understand possible interconnections of air pollution and heat, and to help decision making under such extreme conditions.

Between-city comparisons offer insight into the influence on deaths during heat waves of air pollution, population adaptation, and community preparedness. In Portugal, August forest fires led to a reported 18 accidental casualties [4]: presumably the attendant air pollution may also have had an impact on short-term mortality. Coincident to the high temperatures, elevated concentrations of ground-level ozone and PM10 were recorded in London and the south east of England, those areas of England and Wales where excess mortality was most in evidence [2].

In France, varying concentrations of ground-level ozone in cities subject to differing meteorological circumstances has allowed investigators to assess the joint effects of ozone and heat: these appear to be additive; while the apportionment of deaths to heat versus ozone differed markedly between cities, it appears that for France overall, during the period 3-17 August 2003, heat had the preponderant impact on mortality [16].

French contributors suggest that Marseille’s experience of a heatwave in 1983 and the existence there of a risk management plan for hospitals and a public communication strategy may have led to a death excess in that city of only 26%, compared with 53% for Nice (although the proportion of the very old in Nice is somewhat larger than in Marseille) [3].

France was the country that experienced the greatest increase in mortality due to the 2003 heat wave. From 4th to 13th August, the ambient temperatures were totally unusual, in terms of their amplitude, but also of their persistence over time. In the time interval that spans from 1st to 20th August, mortality rose by 60% when compared to the average values observed for the same interval in the 1999–2002 period, a rise that translated into 14,802 additional deaths (Fouillet et al., 2006; Poumadere et al., 2005; Valleron & Boumendil, 2004). The increase in mortality and morbidity was probably due to a combination of extreme temperatures and poor air quality, mostly associated to high ozone levels (see Vautard et al., 2007).

The vast majority of these extra deaths corresponds to the elderly population that, as usual, were hit hardest (e.g., Pellerin & Hamard, 2003). Thus, in the over- 75 age group, there was a 70% rise in mortality compared to the reference period (1946–2002). This rise was also considerable in the 45–74 age group, with an increase of 30%. While it is difficult to ascertain whether an increase took place in the under-45 age group, it nevertheless seems clear that the heat wave had no effect on mortality among those under the age of 15 years.

A breakdown by sex showed an 80% increase among women (9,510 deaths) versus 5,292 deaths among men (Hemon et al., 2003). This observed excess mortality varied from place to place, and was closely linked to the number of days with maximum temperatures above 35◦C and minimum temperatures above 20◦C. Accordingly, excess mortality figures ranged from 30% of the usual mortality structure for places having just one day of extremely high temperatures, to 50% for places that registered 2–5 days of excess heat, to as high as 80% for places experiencing 6 days or more, a finding that would explain increases as disparate as those recorded for relatively close cities such as Lille (4%) and Paris (142%) (Vandetorren et al., 2004).

The European summer of 2003 was exceptionally warm and the surface ozone data for central Europe show the highest values since the end of the 1980s. The concentrations were particularly high in June and August 2003. In this paper we argue that a number of positive feedback effects between the weather conditions and ozone contributed to the elevated surface ozone.

Firstly, direct measurements of isoprene as well as the increased temperature and solar radiation indicate that biogenic emissions in Europe were increased during summer 2003 with a potential for enhanced ozone formation.

Secondly, we show that the anticyclonic conditions during the ozone episodes were accompanied by an extended residence time of air parcels in the atmospheric boundary layer, a low total ozone column and a reduced cloud cover, all favouring ozone formation.

Thirdly, based on the Lagrangian dispersion model FLEXPART, we show that is very likely that extensive forest fires on the Iberian Peninsula, resulting from the drought and heat, contributed to the peak ozone values observed in North Europe in August. Additionally, forest fires in Siberia probably lead to an elevated background level of ozone and CO at northern latitudes during summer 2003 thereby increasing the level the peak ozone episodes sat on.

Lastly, and most important, the heat wave presumably lead to less efficient ozone dry deposition due to stomata closure of the plants under drought stress.

Due to climate change, situations like this may occur at a higher frequency in the future and may gradually overshadow the effect of reduced emissions from anthropogenic sources of VOC and NOx . This scenario also holds for secondary PM (Particulate matter).

While there are ways to reduce heat stress via cooling, and planning outside activities in the morning or evening hours during hot spells, the human body is also capable to adapt to some degree to hot temperatures (see [Heat-Related Mortality and Adaptation to Heat in the United States], and [Cardiovascular adaptations supporting human exercise-heat acclimation]). However, air quality should always be monitored, since it can add up with heat stress, as outlined above.