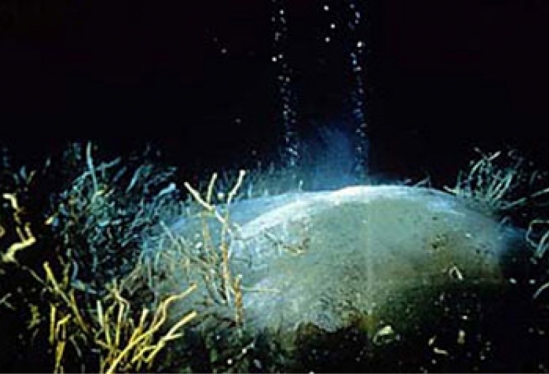 Using a core sample from the Santa Barbara Basin, UCSB researchers decipher the history of paleoclimate change with surprising results

Global climate change isn’t new — the phenomenon has been around for millions of years. But now, a core from the ocean floor in the Santa Barbara Basin provides a remarkable ultra-high-resolution record of Earth’s paleoclimate history during a brief, dynamic time hundreds of thousands of years ago.

New research from UC Santa Barbara geologist James Kennett and colleagues examines a shift from a glacial to an interglacial climate that began about 630,000 years ago. Their research demonstrates that, although this transition developed over seven centuries, the initial shift required only 50 years. Called a deglacial episode because of its association with the melting of large Northern Hemisphere ice sheets, this interval illustrates the extreme sensitivity to change of the Earth’s climate system. The findings appear in the journal Paleoceanography.

“One of the most astonishing things about our results is the abruptness of the warming in sea surface temperatures,” explained co-author Kennett, a professor emeritus in UCSB’s Department of Earth Science. “Of the 13 degree Fahrenheit total change, a shift of 7 to 9 degrees occurred almost immediately right at the beginning.”

For more than a million years, the Earth’s climate has oscillated from glacial (ice age) to interglacial (warm) — the latter representing modern conditions. According to Kennett, the Santa Barbara Basin holds the most pristine marine record of these fluctuations, thanks in large part to the area’s unique location along the California margin. The basin is the confluence of the cool California current from the subpolar region and the warm countercurrent from the tropics.

“The record is incredibly high fidelity, because unlike other places where the amount of sedimentation varies as a function of climate change, here it is remarkably constant,” said co-author Craig Nicholson, a research geophysicist at UCSB’s Marine Science Institute and an adjunct professor of earth science. “That’s because it’s largely controlled by tectonics, the uplift of the mountains to the north and the islands to the south, rather than by climate change.”

Because the scientists were unable to drill deeper than 200 meters into the ocean floor, they turned to tectonics to piece together a semi-continuous record of paleoclimate history. They were able to use the active tectonics to find climatic “windows” going back 700,000 years.

“With this particular core, we hit it rich,” Kennett said. “We opened a really clear window to view one of these glacial-to-interglacial transitions, providing a unique opportunity to determine just how fast the climate operated. We discovered that the changes were much faster than we ever thought possible, especially for these large shifts between a full ice age and a full interglacial. These are big events.”

Of additional interest was the discovery of a volcanic ash layer in the core. “Volcanic eruptions can produce widely distributed ash layers, each with a distinct geochemical fingerprint,” Kennett said. “Our tests showed that this particular ash was ejected from the Yellowstone volcanic caldera in Wyoming, which has exactly the same fingerprint. This huge caldera formed about 630,000 years ago, with most of the enormous volume of ash blown to the east. However, this eruption was so explosive that the ash reached the Santa Barbara Basin, forming a layer one to two inches thick. The discovery of this ash helped with dating the core.”

Kennett noted that this remarkable record of paleoclimate changes also raises an important question: What process can possibly push the Earth’s climate so fast from a glacial to an interglacial state? The researchers may have discovered the answer based on the core’s geochemical record: The warming associated with the major climatic shift was accompanied by simultaneous releases of methane — a potent greenhouse gas.

“This particular episode of climate change is closely associated with instability that caused the release of methane from gas hydrates at the ocean floor,” Kennett said. “These frozen forms of methane melt when temperatures rise or pressure decreases. Changes in sea level affect the stability of gas hydrates and water temperature even more so.

“The clear synchronism of this rapid warming and the onset of the destabilization of gas hydrates is important,” Kennett concluded. “It suggests that methane hydrate instability and the warming are somehow linked, which is an interesting and potentially important observation. The beauty of these paleoclimate records from the Santa Barbara Basin is that you can actually determine these relationships at high fidelity.”

Kennett said that one of the current worries about modern global warming is that the increase in ocean temperatures will destabilize methane hydrates located at relatively shallow depths on the ocean margin, in turn causing positive feedbacks that reinforce the global warming. In fact, this appears already to be occurring in the ocean.

Recent research by others indicates that methane hydrates off the coast of Washington, Oregon and British Columbia are destabilizing in response to a small increase in bottom water temperatures (only 0.3 degrees Celsius) during the past 44 years. This is producing methane gas plumes that billow upward from the ocean floor. Additional ocean margin areas are exhibiting similar responses to warming, which are documented in other scientific work.

Kennett concluded that such investigations of past climate changes not only inform the world about how climate may change in the future but also illuminate the processes involved.

How to deal with orchestrated climate denial online | ClimateState

[…] Above cartoon has been called the best Toles cartoon by Joe Romm. When we finally realize that we cannot simply turn back all the emitted carbon we will wish that we had acted earlier. There is only so much time left for us to do something about the problem of to much CO2 in the air, at one point natural systems will kick in and might unleash additional carbon on their own, no matter what we do then. (Read Research links abrupt paleoclimatic change to possible methane hydrate destabilization) […]