The Hidden Meltdown of Greenland 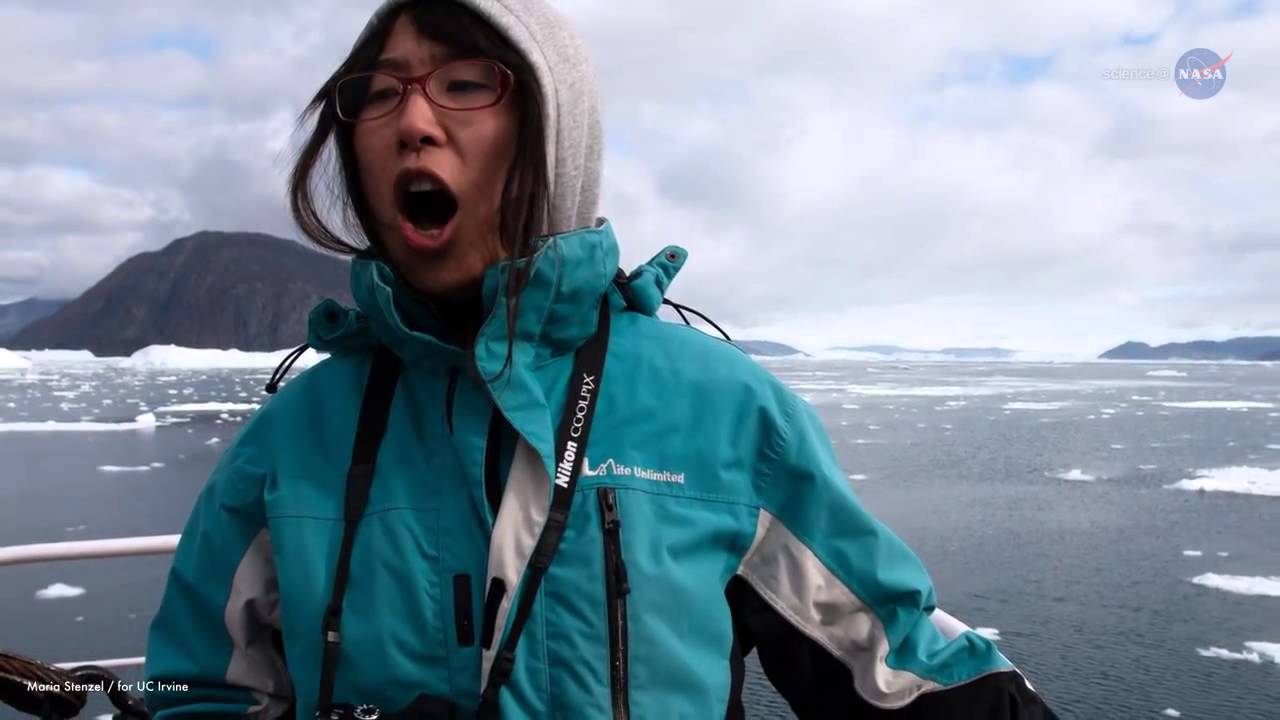 Aug. 28, 2015: More than 90 percent of our planet’s freshwater ice is bound in the massive ice sheets and glaciers of the Antarctic and Greenland. As temperatures around the world slowly climb, melt waters from these vast stores of ice add to rising sea levels. All by itself, Greenland could bump sea levels by 7 meters (23 feet) if its ice melted completely.

In August 2014, Eric Rignot, a glaciologist working at the University of California, Irvine and NASA’s Jet Propulsion Laboratory, led a team in mapping ice cliffs at the front edges of three outlet glaciers in Greenland. The researchers found cavities that undercut the base of these leading edges that can destabilize the ice front and enhance iceberg calving, the process where parts of the glacier break off and float away.

“In Greenland we have melt rates of a few meters a day in the summer months,” says Rignot.
What’s causing this ‘big thaw’?

Rignot’s team found that Greenland’s glaciers flowing into the ocean are grounded deeper below sea level than previously measured. This means that the warm ocean currents at depth can sweep across the glacier faces and erode them.

“In polar regions, the upper layers of ocean water are cold and fresh,” he explains. “Cold water is less effective at melting ice.”

“The real ocean heat is at a depth of 350-400 meters and below. This warm, salty water is of subtropical origin and melts the ice much more rapidly.”

Rignot’s research team is providing critical information needed to document this effect and accurately predict where and how fast glaciers will give way. The team gathered and analyzed around-the-clock measurements of the depth, salinity, and temperature of channel waters and their intersection with the coastal edge of Greenland’s ice sheet.

They found that some of the glaciers balance on giant earthen sills that are protecting them, for now. But other glaciers are being severely undercut out of sight beneath the surface, meaning they could collapse and melt much sooner.

It’s not easy gathering such data. On top of the rough waters, wind, rain, and cold weather, there’s the ice itself.

“We came to study glaciers that discharge into the fjord. And the fjords are full of ice. In some places it can be so full of ice that the boat can’t even push through.”
But ice holds a peculiar fascination for Rignot. “I’ve always been interested in polar regions,”he says. “My friends wanted to cruise in the Caribbean but I’d rather cruise here in these waters. I don’t know why. I just like them.”
What’s next?

OMG stands for Ocean Melting Greenland — the name of a new NASA-funded 5-year project that will take their investigation even further, to the four corners of Greenland by ship and by plane.
‘’We hope that the data collected will be a game changer for studying ice-ocean interaction in Greenland,’’ says Rignot. ‘’It will help modelers make better projections of Greenland ice sheet melt in the future.’’

Rignot’s results have been accepted for publication in the journal Geophysical Research Letters and are now available online.

What is the URL for that paper online?

Hi Edward, i typed the paper title into google and this link came up Undercutting of marine-terminating glaciers in West Greenland Additional you can follow Rignot’s publications via Google Scholar here Google Scholar Eric Rignot (just need to sign in via Gmail).

If you click on the related Google Scholar study link, you will find this publication http://escholarship.org/uc/item/28j711jc

Reply
Go to Top
wpDiscuz
4
0
Would love your thoughts, please comment.x
()
x
| Reply
Cookie Consent
To provide the best experiences, we use technologies like cookies to store and/or access device information. Consenting to these technologies will allow us to process data such as browsing behavior or unique IDs on this site. Not consenting or withdrawing consent, may adversely affect certain features and functions. Learn more about the data usage on this website.
Manage options Manage services Manage vendors Read more about these purposes
View preferences
{title} {title} {title}