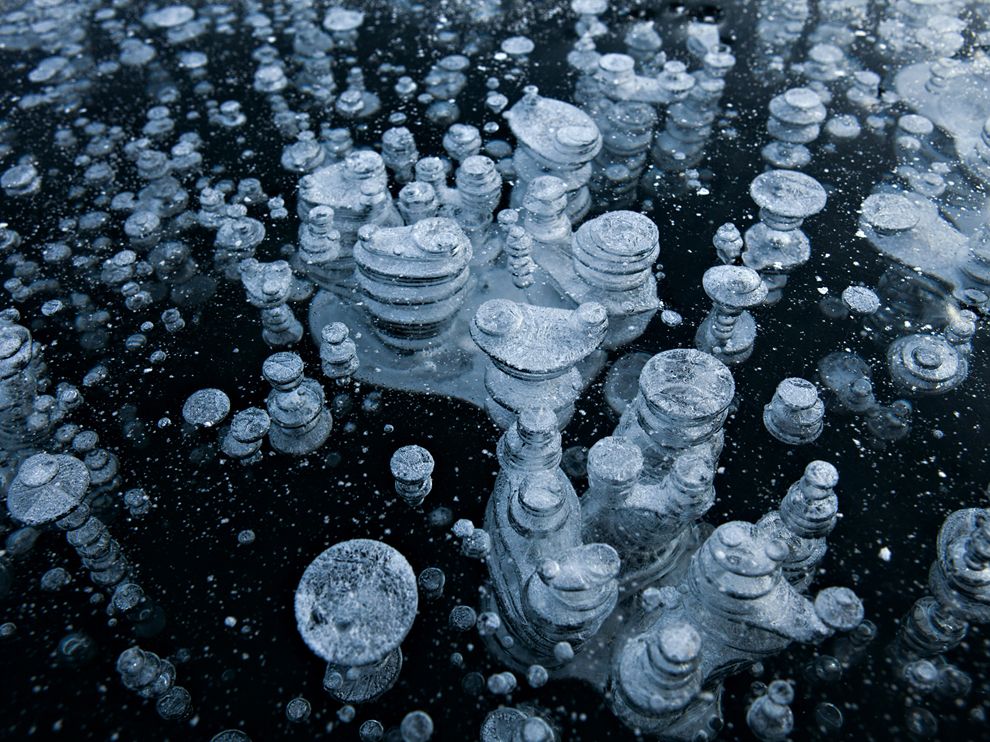 Tromsø, Norway: Centre for Arctic Gas Hydrate (CAGE): It was previously proposed that the permafrost in the Kara Sea, and other Arctic areas, extends to water depths up to 100 meters, creating a seal that gas cannot bypass. Portnov and colleagues have found that the West Yamal shelf is leaking, profoundly, at depths much shallower than that.

Significant amount of gas is leaking at depths between 20 and 50 meters. This suggests that a continuous permafrost seal is much smaller than proposed. Close to the shore the permafrost seal may be few hundred meters thick, but tapers off towards 20 meters water depth. And it is fragile.

Portnov used mathematical models to map the evolution of the permafrost, and thus calculated its degradation since the end of the last ice age. The evolution of permafrost gives indication to what may happen to it in the future.

Basically the permafrost is thawing from two sides. The interior of the Earth is warming the permafrost from the bottom up, called geothermal heat flux – an ongoing process. Thus, if the bottom ocean temperature is −0,5°C, the maximal possible permafrost thickness would likely take 9000 years to thaw. But if water temperature increases, the process would go much faster, because the thawing would also happen from the top down.

“If the temperature of the oceans increases by two degrees as suggested by some reports, it will accelerate the thawing to the extreme. A warming climate could lead to an explosive gas release from the shallow areas.”((Modeling the evolution of climate-sensitive Arctic subsea permafrost in regions of extensive gas expulsion at the West Yamal shelf | http://onlinelibrary.wiley.com/doi/10.1002/2014JG002685/abstract | Alexey Portnov, Jurgen Mienert and Pavel Serov |  Journal of Geophysical Research: Biogeosciences |  Volume 119, Issue 11, pages 2082–2094, November 2014 |  DOI: 10.1002/2014JG002685))

Another study based on a coupled climate–carbon cycle model (GCM) assessed a 1000-fold (from <1 to 1000 ppmv) methane increase – within a single pulse, from methane hydrates (based on carbon amount estimates for the PETM, with ~2000 GtC), and concluded it would increase atmospheric temperatures above >6°C within 80 years. Further, carbon stored in the land biosphere would decrease by >25%, suggesting a critical situation for ecosystems and farming, especially in the tropics.((Damage of Land Biosphere due to Intense Warming by 1000-Fold Rapid Increase in Atmospheric Methane: Estimation with a Climate–Carbon Cycle Model | http://journals.ametsoc.org/doi/full/10.1175/JCLI-D-11-00533.1 |Atsushi Obata and Kiyotaka Shibata |  Journal Climate, 25, 8524–8541, 2012|  DOI:10.1175/JCLI-D-11-00533.1))

Though, in reality it is reasonable to assume that larger methane spikes will be in the 1-2 digit Gt ball park, which are still considerable amounts. The PETM, 55 mil years ago, is marked by several larger spikes. Even if there aren’t larger spikes, the current deglaciation in the northern hemisphere will considerably contribute – increase the current atmospheric carbon budget. Hence, it is vital to reduce emissions now, to slow or even reverse processes before things get out of control.

An Arctic methane worst-case scenario http://www.realclimate.org/index.php/archives/2012/01/an-arctic-methane-worst-case-scenario/
An online model of methane in the atmosphere http://www.realclimate.org/index.php/archives/2012/01/an-online-model-of-methane-in-the-atmosphere/
Methane gas release from ocean might have led to AirAsia flight crash, expert speculates http://timesofindia.indiatimes.com/india/Methane-gas-release-from-ocean-might-have-led-to-AirAsia-flight-crash-expert-speculates/articleshow/45913234.cms