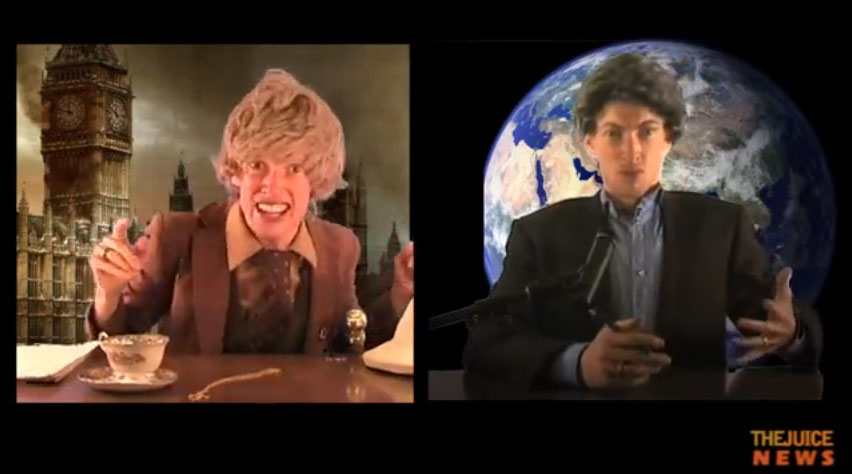 Al Gore finally accepts Lord Monckton’s challenge to a highly uncivilized debate over the issue of anthropogenic climate change, as we count down to the Copenhagen Climate Conference – aka COP15 – in a special extended edition of ~RapNews.
Is it all just a lie spread by the NWO so that Obama can sign a treaty to cede US sovereignty and usher in a one-world government to Cap-&-Trade tax innocent carbon emitters and SUV drivers like you and me? Or are we truly fucked, as the latest science seems to suggest, and feedback loops will bring about environmental, social and economic meltdown and collapse before the next season of Sex and the City? Explore these issues, and more, with your charming host – Robert Foster.

Addendum re Climate-gate: this vid was posted a few days before this incident took place – which is why no mention of it is made (no conspiracy of silence here!). As several viewers have rightly brought this up; but here is what we think: The ‘conspiracy’ is right in front of our eyes, not hidden in emails and behind firewalls.

Aw, Juice, you got caught up in the hype… Carbon taxes on developed nations aren’t about paying the developing world back. They are not even changing developed nations’ lifestyles or consumption, but in fact, the man-made theory has made the developing world voluntarily hold themselves back from developing. The taxes are marginal to us, and at the same time, serves to stifle innovation and competition in the energy sector. This is why you see big oil (which remains untaxed by the carbon tax scheme) taking the charge of developing alternative energies and you don’t see any real implementation of their… Read more »

Are you advocating living in a society without laws or are you using
freedom as a buzzword?

‘I don’t speak Latin, but my teacher frequently sodomises me’
What?

@bubbah corporations compete?!? HAAHAHAHAHA ahh good one… ok now did you
watch the link? Al Gore worked with Enron on making the carbon trading
scheme. How come you answer everyone with ad hominem attacks? also no…
the al gore/IPCC hockey stick is not in the newest raport… wtf are you
talking about. And nothing will change that fact, no matter how many times
you call someone a ”ignorant denialist” …ohh the irony

“Money for new trees? Why not use it to assist local tribes to preserve
forests that still exist?” I have a friend who give some of his money to
finance this “money=new trees” web sites projects. That’s like giving money
to the fuckforforestDOTcom website back in the 90’s, nothing but a fraud!

I haven’t been able to find any other video with Mr. Gore and Mr. Monckton
speaking with such unbiased scientific precision and eloquence as here.
Thank you very very much.

“…backed by science trying to attract high finance.” Almost never do you
hear the truth like this, and people rave about “proven facts” all the
time, when even some common (for some) sense and research tell you
different. Climate change has been on the same CYCLE for thousands of
thousands of years…lol.

maybe a bit long for your attention span…haha

i take it you want anarchy?

@Chandradzyns with no spaces i mean

wow some people are slow. There obviously making fun of Al Gore and his
“climate change”. ROBERT FOSTER FOR PRESIDENT

That is a completely stupid reply. Why are they all forced to eat together
and at the same restaurant? What you have posted assumes lack of choice
which I find abhorrent. The US consumes more because they can afford to
consume more. That will soon change I would wager but regardless freedom
means unequal results. What you are suggesting is totalitarian communism.

Our hope, like the hope of patriots in the late 1700’s is that division of
power in a system that puts rule of law first can build a stable society
for a while. … And every day you live under rule of law is a small
victory. We need to ensure that people learn the true meaning of patriotism
every generation, which is that we can’t assume we will have liberty, but
every generation must fight its own fight. But if we work together then big
things are possible.

I agree with you on the second point. That is inevitable under anarchy and
controlled government. We need to be ready to fight to take our country
back every generation. What separation of powers, democratic processes, and
rule of law do is they give us time to wake up and fix things after we grow
complacent and before they are able to close society. Education wouldn’t
help with the Koch brothers. They know that they are causing cancer by
subverting EPA regulations.

China produces the most pollutions.

You have a strange idea that bad people will rise to the top in
governments, but will remain at the bottom of corporations. I have heard
that viewpoint before but no-one has ever shown me evidence or shown me a
counterexample to obvious cases like 19th century Germany or modern
afghanistan. I would submit that the exact opposite is true, and it is
people like Sheldon Addison, Charles Koch, and Dick Cheney who have
corrupted government from the power they got in corporations.

@Elkinjones My understanding of it in (very) short terms: The point I
believe Mr Foster is trying to make is that the claims made in the debate
over the alleged climate crisis must be judged based on the degree to which
the sources they quote have been exposed to independent peer review, and
that it’s crucial to remember that on all sides of the debate there will be
people with ulterior and selfish motives, motives that are usually about
earning more money for oneself.

this is the 3rd rap news and its already brilliant

“Monopoly always leads to abuse.” That is a statement of assumption, not a
reasoned argument. In fact, in the US, violence is generally used inside
the borders for the codified aims of it’s rule makers and there are
difficulties when you try to use violence for personal gain. In the case of
a free market for violence, whatever use of violence is most profitable
will win over. Mises says that Penn was a constitutional governorship. Not
an anarchy.

I like this more then queens get the money