Kerry: US to Work With China on Climate Change 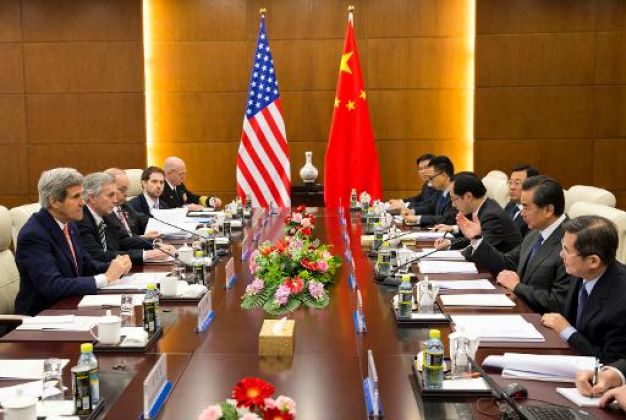 Secretary of State John Kerry toured a factory in Beijing Saturday and announced a new joint partnership with China to work on curbing emissions and output of greenhouse gases that trap solar heat in the atmosphere. (Feb. 15)

Joe Romm (ClimateProgress) adds: Secretary of State John Kerry gave perhaps his strongest climate speech in Indonesia Sunday. He called climate change the “world’s most fearsome” weapon of mass destruction and said “the science of climate change is leaping out at us like a scene from a 3D movie. It’s warning us; it’s compelling us to act.”

At the same time, a must-read new analysis by Oil Change International finds that “all of the scenarios used by the State Department” in their Final Environmental Impact Study (EIS) of the Keystone XL tar sands pipeline “result in emissions that put us on a path to 6 degrees C (11°F) of global warming according to the International Energy Agency (IEA).” Talk about mass destruction!

The U.S. has a serious shot at hitting the 2020 target of a 17 percent cut in CO2 emissions from 2005 levels that Obama made for the 2009 climate talks in Copenhagen — a target embraced in his Climate Action Plan (but utterly ignored by State’s EIS). That requires the President to embrace strong emissions reductions from existing coal-fired power plants. But let’s not pretend that target is either especially hard to hit or scientifically meaningful (see “Developed Nations Must Cut Emissions In Half By 2020, Says New Study“).

That is to say, the fact Kerry can go to the other big emitters and commit to meeting Obama’s pledge is a necessary minimum condition to achieve a climate agreement, but it is not sufficient. He needs some moral standing. He needs to be able to demonstrate to the world the U.S. understands that far deeper cuts are needed post-2020 and that means not sticking new spigots into huge, dirty carbon pools like the tar sands.

Kerry needs to show that his words are more than words, that he actually believes climate change is the most fearsome WMD. Kerry must recommend to Obama that Keystone be killed.

And why am I worried about global warming? Kerry used more fuel for this
one event than I will use in a life time.

The question is how do you maintain the ecology with a fake economy.
You can’t, you have one or the other.
Fuck of back to Syria you ain’t finish there yet.

HE WENT THERE JUST TO TALK CLIMATE ??? LOLZZ
, MAKE WAR WITH GREEDY CHINA..

is it April 1st already ?

Cummins Engine Company logo…those use to be high paying jobs in my area
$25.00+ an hour

Who believes this crap? LOL

They will start a discussion now with China on climate change….The
debates and discussions on whether green house gasses are causing the
climate change have been over for years….Just more stall tactics as they
get ready to approve the Keystone pipeline…..

I can’t listen to these guys anymore….

Herman Munster here (Kerry) is such a loser! I would not even trust this
clown to sharpen a pencil. He will Fail like he always does, and blame it
on someone else, and then (Like his Syria stance) Get all angry and want to
Bomb them. He’s SO predictable to Fail at everything!

AKA: Code-word for mass population-culling strategies… to ugh, “reduce
greenhouse gasses.”
If you remember Bill Gates little CO2 equation, it was the P (people) in
the equation which had to be massively reduced.

Somebody needs to shut down America.

Too bad they didn’t take nuclear power seriously 30+ years ago and there
could be an abundance of cheap clean energy.

Just words no action. Even if they were honest, it’s much to little to
late. If Gore had won and the bushists had not stolen the victory, we would
have had a chance. Instead all progress got stopped and the fake ‘war on
terror’ was instantiated. The SUV became the symbol of the new century and
the neolib madness in financel markets ran amok, while the neocons
destroyed the lives of millions in iraq. Humans are a lost case.

Mr. Secretary, you’re wasting your time in China. They could care less
about anyone or anything but themselves and they are a deeply materialistic
society. You have a better chance bringing peace to the Middle East than
the time you’re spending there. I wish you well, but you’re wasting your
time.

There is so little political will to get something done on climate change because you have several powerful industries lined up against doing anything….particularly the world petroleum industry. Its disheartening…..especially when you look at the wacky weather patterns: 1. Brief winter heat wave in eastern US ….followed by extreme cold as polar vortex broke off from the Arctic and moved into Canada and the US. 2. Loss of sea ice in Arctic 3. Very warm weather in Siberia in November 4. Series of storms battering Europe’s Northwest causing massive flooding. 5. Severe long term drought in California central valley that… Read more »

It’d be nice to see china cut down on the air pollution. Itd be a way more
beautiful country than it already is if it had clear skies.

China only cares about making money and becoming a super power. They didn’t
even change the minimum wage let alone worry about the climate

THIS,would help:
Extinguish the world’s coal mine fires (Nitrogen foam will do this) many of
which have been burning for generations.
This,is a bigger gas emitter than most people know.
Google:Centralia Pennsylvania. YouTube search: China Coal Mine fires.
Initiate a major tree planting program to significantly increase the
world’s net number of trees.

Finally something worthwhile coming out of his mouth.

Start with new solar cars that charge themselves as long as you park them,
in the sun.

Reply
Go to Top
wpDiscuz
22
0
Would love your thoughts, please comment.x
()
x
| Reply
Cookie Consent
To provide the best experiences, we use technologies like cookies to store and/or access device information. Consenting to these technologies will allow us to process data such as browsing behavior or unique IDs on this site. Not consenting or withdrawing consent, may adversely affect certain features and functions. Learn more about the data usage on this website.
Manage options Manage services Manage vendors Read more about these purposes
View preferences
{title} {title} {title}