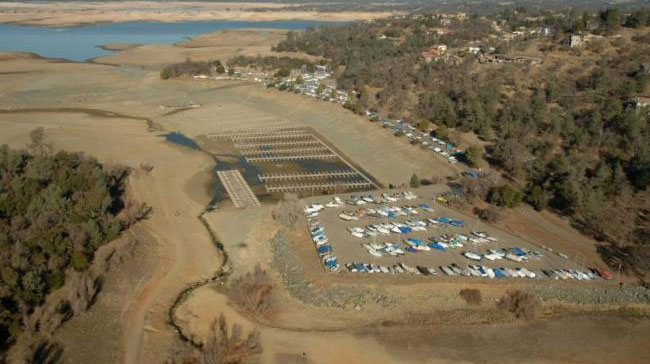 California’s reservoirs are severely depleted due to the ongoing widespread drought conditions in the state. As of Jan. 21, 2014, 67 percent of California was in extreme drought, the second worst category possible on the U.S. Drought Monitor.

According to the California Department of Water Resources, Lake Shasta and Lake Oroville are only 36 percent of capacity. Folsom Lake is just 17 percent capacity.

Starting with Folsom Lake above, we’ve matched up recent photos of these three depleted lakes from the California Department of Water Resources with images from Google Earth that show the lakes when they were much fuller. Move your mouse over each image to see the startling comparison.

now you can clean the shit you throw in!!

Excellent production. Check out my aerial videos of Folsom on my channel (look in the “Recent Uploads” playlist… We’re in big trouble this summer!

[…] Draught in California causes concern for MANY people!! […]

We have been poisoning God’s soils, fruits, vegetables, animals and food supplies with chemicals for a long time now. We have been irrigating God’s land with salt water from the ocean which our children must live in California desert in the near future. We are destroying God’s creations.
Therefore, we surly deserve these disasters. Cold weather, drought, sickness, and on . . Ask not what your country can do for you, ask God for help.
Happiness is submission to God. But, media is trying so hard to deny our Creator, by TV, sex, and intoxicants. Thank God for Youtube.

What if home owners and others leave their toilets connected to the city drain, and disconnect other drains of the home to drain off in the back yards, i would let my waste water drain into a large steel plate bowl, so that some water will evaporate and some water will go into the ground smart balance you pay for the water, why do you return the water to the seller? The government complicates things more because of money problems if i had the money and power i would run a ¾ inch plastic pipe just like a telephone wire… Read more »

So, there was a time in the past that the water was about at the level that it now is. Because no one build a bridge under water.