Why pipelines are a bad idea

You are here:
OilTar Sands 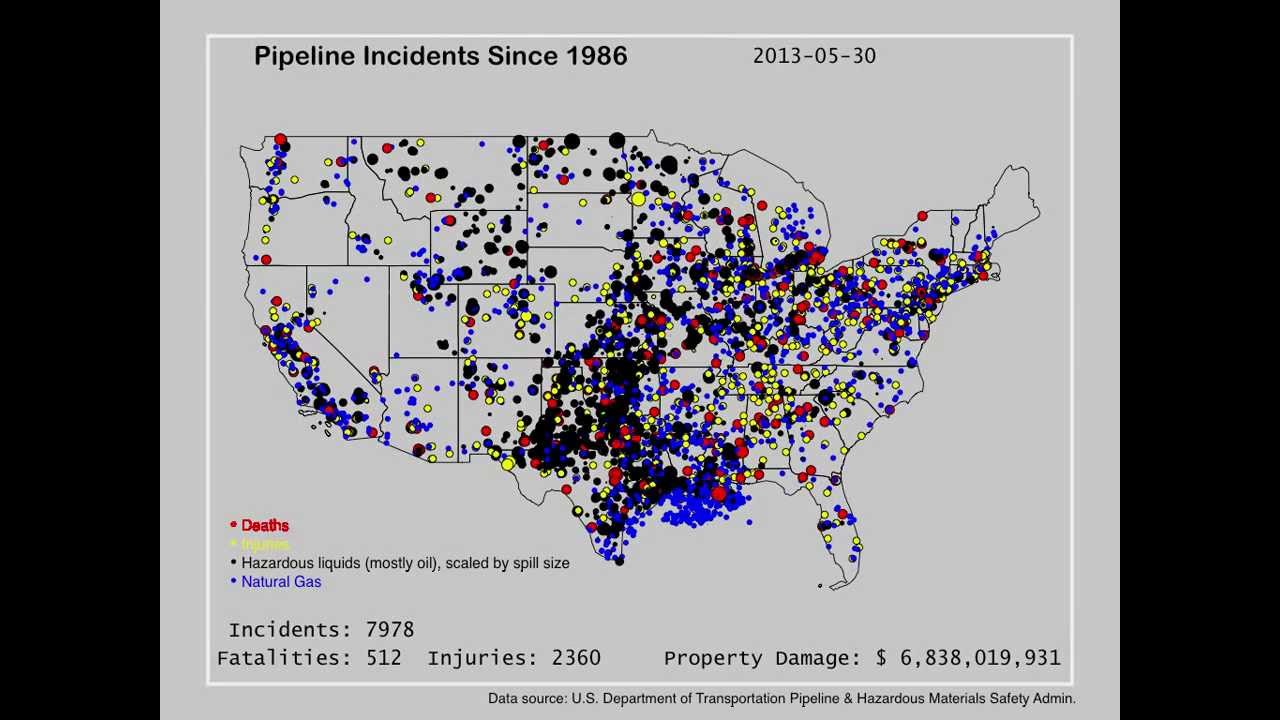 Published on Jul 31, 2013: A new analysis of oil and gas pipeline safety in the United States reveals a troubling history of spills, contamination, injuries and deaths. Read more at NoKeystone.org.

This time-lapse video shows pipeline incidents from 1986 to 2013, relying on publicly available data from the federal Pipeline and Hazardous Materials Safety Administration. Only incidents classified as “significant” by the agency are shown in the video. “Significant” incidents include those in which someone was hospitalized or killed, damages amounted to more than $50,000, more than 5 barrels of highly volatile substances or 50 barrels of other liquid were released, or where the liquid exploded or burned.

According to the data, since 1986 there have been nearly 8,000 incidents (nearly 300 per year on average), resulting in more than 500 deaths (red dots on the video), more than 2,300 injuries (yellow dots on the video), and nearly $7 billion in damage.
Since 1986 pipeline accidents have spilled an average of 76,000 barrels per year or more than 3 million gallons. This is equivalent to 200 barrels every day.

I honestly don’t want the pipeline. I just want people to leave nature
alone. Didn’t they fucked up enough?

If Keystone isn’t built, the oil is going to be transported by rail. Rail
is a much more dangerous means of transporting oil and much more carbon
intensive.

But perhaps you’d prefer your town end up like Lac-Mégantic, Quebec (47
dead).

“King of the Mountain” kills everyone else, and WINS!
USA USA!

???”We’ve invested a lot of money, time and resources to ensure that we’re
using the best available technology to operate our pipelines with the
utmost integrity,”??? Pipelines may be better than railcars but are still
worse than nothing!

@ 1:04 Pipeline incidents since 1986 have resulted in around 8000 spills, explosions and other incidents, over 500 deaths, over 2000 injuries and have resulted in around $7 billion in property damage … what the video doesn’t indicate, and really should have to connect the dots, is that the oil industry has contributed billions towards the campaigns of almost every sitting member of Congress and to all presidents since before this 1986 counter began … we have ready alternatives to oil and gas ~ specifically Thorium fission molten salt reactors, solar reflector power plants and fields of wind turbines, and… Read more »

XL Pipeline is the oil in the sand so to speak. If its given the OK –
there WILL be a revolution.

Til they figure out a way to transport fuels good luck. Trust me I have
worked around those things and they are protected some are even flown over
daily by small planes and patrolled constantly. I’ve done land surveys
where we had to cross and locate these on the plats we were making and we
were visited every time by the people whose job it is to safe-guard ’em.

Texas must be very slippery.

if you keep sucking the oil endlessly out of the ground and not expect
problems eventually, earth quakes etc, by the time it starts to get really
bad its going to be to late folks, we should have stopped this years ago

something you didnt know about the empire which rules our world

This time-lapse makes all of America appear to be an EPA Superfund site.

what is a natural gas incident?

Mr. Alpert obviously does not understand the concept of “the cycling of matter”. All physical objects on earth such as oil don’t “go away” or get “BURNED UP!!!”. When the oil burns the carbon molecules are converted to carbon dioxide. Sulfur and other chemicals in the crude oil are converted into sulfur dioxide and other gaseous pollutants. They travel through the atmosphere where they cause harm to life forms both plants and animals – including humans. The point of this video is to encourage energy sources that don’t pollute. Oil that spills on the ground soaks in. If it is… Read more »

Well, this is a good argument. Very good show of reasoning and logic to
counter these facts. Yes, indeed.

We only have one planet, take care of our home for our children…

Most of the oil and gas we ship through pipelines does not go for our gas
consumption. It only goes to investors pockets. GET REAL!!

Maybe the number of disastrous pipeline incidents in their states show why
texass and oklahoma send maniacs to the Senate.

Renewable sustainable energy? Well, it’s been developed and can be
used…the oil companies….prefer this way.

Electricity works for me. The collectors on my garage roof provide enough
free power for the house and the electric car.

This is all about money and propaganda regarding jobs. Educated people must
continue to help others understand the importance of protecting our natural
environment because ultimately this is what we are dependent upon.

Terrible. We need a moratorium on oil and gas pipelines, except repairs,
and we need much more frequent inspections, and stronger laws to protect
people and the environment.

I power my entire home’s energy needs and my Volt using the sun….

this is what the keystone pipeline proponents don’t want you to know.

Check out this video.

Every one of these spills were cleaned up and the pipelines were repaired. Millions of barrels are carried in pipelines every day safely. Yesterday a train carrying oil derailed in Eastern North Dakota then another train hit it and ignited the oil in 10 cars. The oil spilled in an oil spill can be cleaned up and most of it can still be refined and made into usable petroleum products. The oil burning in the 10 cars will not be usable after the fire is out, because it got BURNED UP!!!!!! Obama, approve the KEYSTONE XL PIPELINE IMMEDIATELY OR PEOPLE… Read more »

See. Pipelines are so much safer in Canada. No incidents north of 49.
Lucky us or so the proponents would like us to believe.

it’s the 21st century there is no reason to stay with oil and gas… do
people really think that fuel sources for transportation and heating
stopped with the discovery of oil and the combustion engine?? a better
safer cleaner planet is possible for future generations

Being a Canadian and watching this, I can say that these spills are terrible. But if America doesn’t want this pipeline, I’m fine with that. The alternatives to this is to build a pipeline through the Rockies to British Columbia, and ship the oil to Asia for processing, or the more likely option of building a pipeline to New Brunswick, and have it processed there. This would create thousands of jobs in Atlantic Canada, which is where I’m from, and keep more of the money from the Oil Sands within Canada. So hey, if the the US doesn’t want our… Read more »

I suspect this not only covers pipelines but rail cars as well. In 2013
more oil was spilled from rail cars than the previous 37 years combined.

“Obama’s real lasting legacy is not his Obama-care (ACA), but his complete
complicity with Big Oil and Gas in the volatile unreasonable poisoning of
our air, our water, and the unadulterated poisoning of the Citizens of the
USA with his uncensored endorsement of FRACKING Natural Gas (LNG) and Tar
sands oil distribution!!”

There are people who would burn down the whole world for a bigger piece of
pie. There are other people that will gladly help them do it for some
crumbs from that pie. Examples below –>

Reply
Go to Top
wpDiscuz
44
0
Would love your thoughts, please comment.x
()
x
| Reply
Cookie Consent
To provide the best experiences, we use technologies like cookies to store and/or access device information. Consenting to these technologies will allow us to process data such as browsing behavior or unique IDs on this site. Not consenting or withdrawing consent, may adversely affect certain features and functions. Learn more about the data usage on this website.
Manage options Manage services Manage vendors Read more about these purposes
View preferences
{title} {title} {title}