You are here:
2012CryosphereDeglaciationDocumentaryFilmsGlaciologyGreenlandIce Sheets 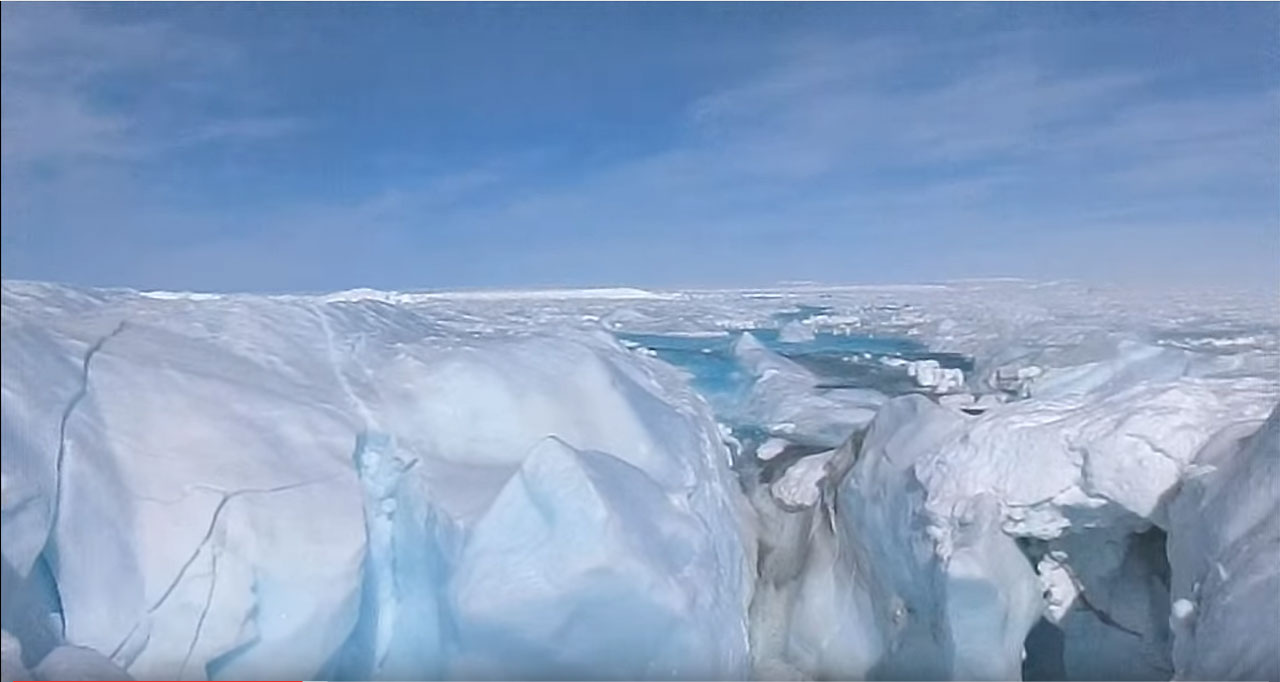 2013 National Headliners Award First Prize Environmental Reporting HD 42 mins
In the summer of 2012, one of the most vital ecosystems on earth, the Greenland ice sheet, experienced a meltdown that alarmed scientists the world over. Greenland is an island encased in ice and it’s the world’s second largest ice sheet after Antarctica. That summer, ninety-seven percent of the surface ice melted. “Melting Point” is a comprehensive examination of this event.

Videographer Snorre Wik shot the footage under tough conditions—hauling around 1,000 pounds of gear by helicopter, by SUV (on Greenland’s mostly dirt roads) and out on a thinning ice sheet made treacherous by the sun. His efforts were both breathtaking and disturbing. Additionally, Jens Christiansson is responsible for filming the destruction of the Watson River bridge. Marco Tedesco and his team of researchers filmed the moulins and ice cap during the record meltoff.

National Snow and Ice Data Center (NSIDC) Get satellite images and information about surface melting on the Greenland ice sheet. http://nsidc.org/greenland-today/
August 28, 2013 Greenland’s surface ice melt season reached a peak in late July, coinciding with a period of very warm weather. Greenland’s melt season this year will be closer to average than was 2012, with far less melting in the northern ice sheet and at high elevations. Nevertheless, an all-time record high temperature for Greenland may have been set in 2013. http://nsidc.org/greenland-today/2013/08/late-season-warmth-extends-2013-greenland-melt-seasonbriefly/

The Danish Arctic research institutions present updated knowledge on the condition of two major components of the Arctic: The Greenland Ice Sheet and the sea ice http://polarportal.org/en/home/

NOAA Arctic Report Card has been issued annually since 2006. It is a timely and peer-reviewed source for clear, reliable and concise environmental information on the current state of different components of the Arctic environmental system relative to historical records. The Report Card is intended for a wide audience, including scientists, teachers, students, decision-makers and the general public interested in the Arctic environment and science.
2013 Greenland Ice Sheet http://www.arctic.noaa.gov/reportcard/greenland_ice_sheet.html

i do think that some drilling could be great for greenland economically,
the world’s future could depend on what greenland has to offer for oil. but
i do agree it has it’s downfalls when it comes greenland’s nature and all

what does beer cost in greenland

Yes Rich, the earth is changing and this time it is us who are changing it.
Do a little research with an open mind and you might be surprised what you
find out…

Great documentary on Greenland. Thank you so much!

As a giver of good tidings and a warner; but most of them turn away, so
they do not hear.

Its interesting to see so many opinions and lack of empathy… thinking
they know everything and being sarcastic. Sad…the only people who really
know whats going on is those scientists who invest their time into the
research.

This is a propaganda piece, so don’t waste your time.

A really well-made documentary. I enjoyed watching it

Thats bull shit its not ppl there is no such thing as gobal warning its the
sun ppl! the sun is getting hotter dont believe me good do ur own research!

Why most environmentalists always live in the most expensive home and
flying around with private jet like Al Gore and blaming on gasoline?raise
more taxes?

The Artic ice extent in 2013 was the fifth LOWEST on record at 425,000
square liles BELOW average.
Simple observable measurable fact.
The article in the Daily Mail by David Rose was fraudulant – he compared
the extent in early August 2013 with the extent on 23 September 2012.
Amazing how easily some hapless dupes are fooled by a third rate hack but
they will ignore real time measurements.
2014 is already back at record low extent for the time of year today ( May
5th)

After listening to the narration, I’m glad that we are about to become
extinct.

Who the fuq chose the narrator!

This is what happen to “free riders” whereby some people make an attempt to
save the Earth while others took advantage of it, not mentioning when money
and politics come into play.

Everyone is fearing global warming for the retreating of the glaciers. For the glaciers to stop retreating the Earth will have to have a constant below freezing temperature above the 45th parallel year around, in other words the United States would be part of the north pole. This is what it took to make glaciers in the first place, freezing temperatures year around which was known as the Ice Age. People are fearing the winter that the North East is having this year and that we were in climate change because of the green house gases. Well let’s look at… Read more »

climate and global warming – you are so full of shit it is incredible. just
as any living thing, the earth goes through cycles. so get off your global
warming high horse.

Furthermore, the melt rate of Antarctica and Greenland is about 1/24th that
of the Holocene Transgression which was ~ 10mm/yr for 10,000 years! Bottom
line is that we are no where near that rate. Much faster than anyone
predicted? Don’t think so, at least from a geological standpoint. Must
understand our past. Need to take another look at it.

Vikings grew barley in Greenland A sensational find at the bottom of an ancient rubbish heap in Greenland suggests that Vikings grew barley on the island 1,000 years ago. The Greenland climate was a bit warmer than it is today, and the southernmost tip of the great island was luscious and green and no doubt tempted Eric the Red and his followers. The planet had to warm since we were in a small ice age. But it is stopped warming and now only climate change that is also normal for the planet. Glaciers disappearing while the ice cap on the… Read more »

ROFLMAO, so they go to Greenland during the summer and are chocked to find
melt water ponds?? Oh and they are even more shocked when those ponds drain
away!?!?! Really, I mean REALLY?

“Westernised society”, so there will be McDonalds wrappers floating in the
waters and fatness will the nation’s biggest killer soon? This is greed by
corrupt politicians, always is.

They BS about the Artic to. The ice does displace the water but the iced
water is trapped at the pole, not free-floating to add to the tides. The
Earth is geodesic They’re so stupid to expect people to not see that when
they try to gloss-over the bad news.

Would it not also be possible that there is a rising of the hot spot
beneath Greenland? This would increase the melt rate due to increased
temperatures from below. If you combine that with volcanic ash from the
Icelandic eruption laying on the surface of the ice sheet, the melt rate
would dramatically increase. All of this increase could be happening
without jumping on the “global warming” “climate change” bandwagons.

And in 2014 the melting has gotten worse:

I don’t get it

This is not a matter of debate or beliefs. This is a matter of you are
either stupid or not. Global warming has consequences

What a nest of alarmist wallies ~ quite amusing to observe how they dismiss
past ice losses so flippantly ~ tsk tsk.

This is demented fear mongering that blends only bad effects with the
current causes. Global warming is one issue, energy and mining companies
are another. Global warming activist tend to obfuscate the two.

I cannot believe the things I am reading.. All of this is the direct result
from cow farts. Nothing more.

Baronstone et al.,….please do some homework! Global Climate Change is
real. The issues are complicated and very convoluted. There are no
simplistic ways to describe or explain this problem. Please criticize from
a knowledge base, not from emotions. Thanks