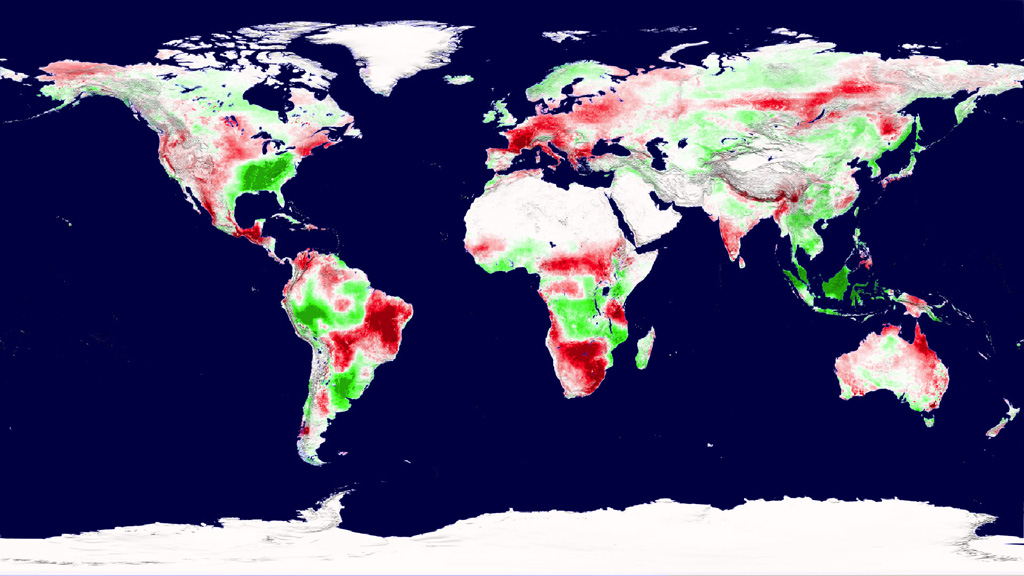 published 08.19.10 by Kathryn Hansen | Source
Earth has done an ecological about-face: Global plant productivity that once flourished under warming temperatures and a lengthened growing season is now on the decline, struck by the stress of drought. NASA-funded researchers Maosheng Zhao and Steven Running, of the University of Montana in Missoula, discovered the global shift during an analysis of NASA satellite data. Compared with a six-percent increase spanning two earlier decades, the recent ten-year decline is slight — just one percent. The shift, however, could impact food security, biofuels, and the global carbon cycle.

“We see this as a bit of a surprise, and potentially significant on a policy level because previous interpretations suggested that global warming might actually help plant growth around the world,” Running said.

“These results are extraordinarily significant because they show that the global net effect of climatic warming on the productivity of terrestrial vegetation need not be positive — as was documented for the 1980’s and 1990’s,” said Diane Wickland, of NASA Headquarters and manager of NASA’s Terrestrial Ecology research program.

Conventional wisdom based on previous research held that land plant productivity was on the rise. A 2003 paper in Science led by then University of Montana scientist Ramakrishna Nemani (now at NASA Ames Research Center, Moffett Field, Calif.) showed that global terrestrial plant productivity increased as much as six percent between 1982 and 1999. That’s because for nearly two decades, temperature, solar radiation and water availability — influenced by climate change — were favorable for growth.

Setting out to update that analysis, Zhao and Running expected to see similar results as global average temperatures have continued to climb. Instead, they found that the impact of regional drought overwhelmed the positive influence of a longer growing season, driving down global plant productivity between 2000 and 2009. The team published their findings Aug. 20 in Science.

“This is a pretty serious warning that warmer temperatures are not going to endlessly improve plant growth,” Running said.

The discovery comes from an analysis of plant productivity data from the Moderate Resolution Imaging Spectroradiometer (MODIS) on NASA’s Terra satellite, combined with growing season climate variables including temperature, solar radiation and water. The plant and climate data are factored into an algorithm that describes constraints on plant growth at different geographical locations.

For example, growth is generally limited in high latitudes by temperature and in deserts by water. But regional limitations can very in their degree of impact on growth throughout the growing season.

Zhao and Running’s analysis showed that since 2000, high-latitude northern hemisphere ecosystems have continued to benefit from warmer temperatures and a longer growing season. But that effect was offset by warming-associated drought that limited growth in the southern hemisphere, resulting in a net global loss of land productivity.

“This past decade’s net decline in terrestrial productivity illustrates that a complex interplay between temperature, rainfall, cloudiness, and carbon dioxide, probably in combination with other factors such as nutrients and land management, will determine future patterns and trends in productivity,” Wickland said.