NASA Finds ‘Amazing’ Levels Of Arctic Methane And CO2, Asks ‘Is a Sleeping Climate Giant Stirring in the Arctic?’ 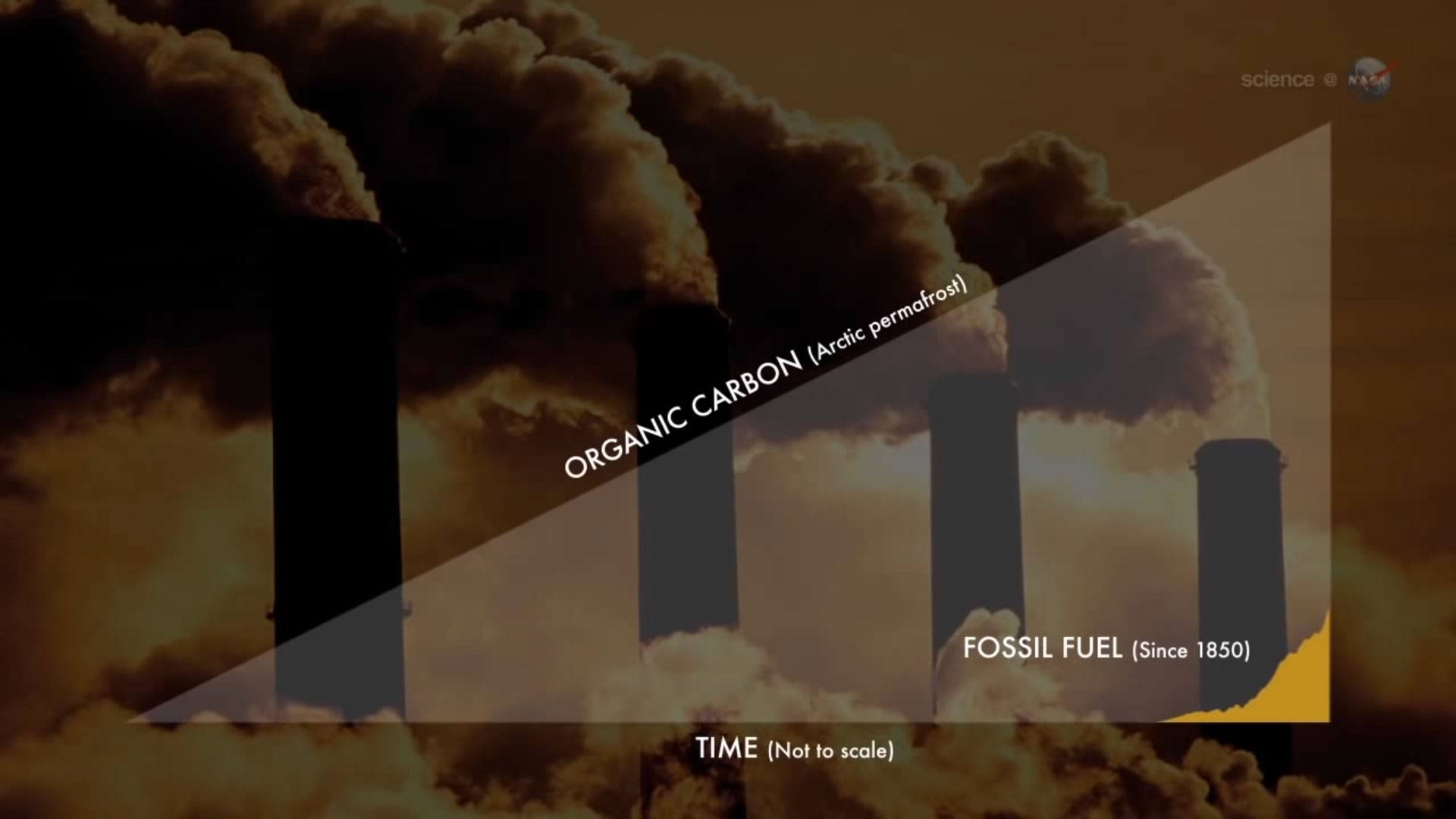 By Joe Romm / Climate Progress – on Jun 13, 2013: A NASA science team has observed “amazing and potentially troubling” levels of methane and CO2 from the rapidly warming Arctic. Given the staggering amount of carbon trapped in the permafrost — and the fact that methane is a very potent heat-trapping gas — the space agency is now asking: “Is a Sleeping Climate Giant Stirring in the Arctic?”

“Permafrost zones occupy nearly a quarter of the exposed land area of the Northern Hemisphere. NASA’s Carbon in Arctic Reservoirs Vulnerability Experiment (CARVE) is probing deep into the frozen lands above the Arctic Circle in Alaska to measure emissions of the greenhouse gases carbon dioxide and methane from thawing permafrost — signals that may hold a key to Earth’s climate future.” Credit: UNEP

We’ve known for a while that “permafrost” was a misnomer (see “Thawing permafrost feedback will turn Arctic from carbon sink to source in the 2020s“). The defrosting permamelt will likely add up to 1.5°F to total global warming by 2100.

Two studies from February provide more evidence the process may happen even faster than we thought:

Now we are getting some of the first detailed observations of carbon emissions from the thawing permafrost thanks to the Carbon in Arctic Reservoirs Vulnerability Experiment (CARVE), “a five-year NASA-led field campaign studying how climate change is affecting the Arctic’s carbon cycle.”

Flying in a specially instrumented C-23 Sherpa aircraft only 500 feet above the ground, CARVE scientists “measure interesting exchanges of carbon taking place between Earth’s surface and atmosphere,” something most other airborne permafrost measurement missions can’t do. The goal:

Ultimately, the scientists hope their observations will indicate whether an irreversible permafrost tipping point may be near at hand. While scientists don’t yet believe the Arctic has reached that tipping point, no one knows for sure.

NASA’s news release is one of the best I’ve ever seen from any source. I’ll quote it at length since its factoids and findings are so citable.

Let’s start with just how fast the permafrost has been heating up. CARVE principal investigator Charles Miller of NASA’s Jet Propulsion Laboratory explains:

“Permafrost soils are warming even faster than Arctic air temperatures — as much as 2.7 to 4.5 degrees Fahrenheit (1.5 to 2.5 degrees Celsius) in just the past 30 years,” Miller said. “As heat from Earth’s surface penetrates into permafrost, it threatens to mobilize these organic carbon reservoirs and release them into the atmosphere as carbon dioxide and methane, upsetting the Arctic’s carbon balance and greatly exacerbating global warming.”

Recall that NOAA has reported, “In 2012, new record high temperatures at 20 [meters, 65 feet] depth were measured at most permafrost observatories on the North Slope of Alaska and in the Brooks Range, where measurements began in the late 1970s.”

This warming is troubling for two reasons. First, the permafrost contains a staggering amount of carbon:

Permafrost (perennially frozen) soils underlie much of the Arctic. Each summer, the top layers of these soils thaw. The thawed layer varies in depth from about 4 inches (10 centimeters) in the coldest tundra regions to several yards, or meters, in the southern boreal forests. This active soil layer at the surface provides the precarious foothold on which Arctic vegetation survives. The Arctic’s extremely cold, wet conditions prevent dead plants and animals from decomposing, so each year another layer gets added to the reservoirs of organic carbon sequestered just beneath the topsoil.

Over hundreds of millennia, Arctic permafrost soils have accumulated vast stores of organic carbon – an estimated 1,400 to 1,850 petagrams of it (a petagram is 2.2 trillion pounds, or 1 billion metric tons). That’s about half of all the estimated organic carbon stored in Earth’s soils. In comparison, about 350 petagrams of carbon have been emitted from all fossil-fuel combustion and human activities since 1850. Most of this carbon is located in thaw-vulnerable topsoils within 10 feet (3 meters) of the surface.

Second, methane is a very, very potent heat-trapping gas. Whether the permamelt releases CO2 or CH4 depends critically on the soils and state of the land surfaces, which CARVE aims to characterize:

There’s a strong correlation between soil characteristics and release of carbon dioxide and methane. Historically, the cold, wet soils of Arctic ecosystems have stored more carbon than they have released. If climate change causes the Arctic to get warmer and drier, scientists expect most of the carbon to be released as carbon dioxide. If it gets warmer and wetter, most will be in the form of methane.

After its first full year of science flights, CARVE is analyzing data. Here’s what is “both amazing and potentially troubling.”

“Some of the methane and carbon dioxide concentrations we’ve measured have been large, and we’re seeing very different patterns from what models suggest,” Miller said. “We saw large, regional-scale episodic bursts of higher-than-normal carbon dioxide and methane in interior Alaska and across the North Slope during the spring thaw, and they lasted until after the fall refreeze. To cite another example, in July 2012 we saw methane levels over swamps in the Innoko Wilderness that were 650 parts per billion higher than normal background levels. That’s similar to what you might find in a large city.”

The time to slash carbon pollution was a long time ago, but now is still incalculably better than later.

Great video — but (pedant alert) where is this “Artic” of which they
speak? Perhaps a pirate realm: arr, in the Arrr-tic, me maties! They
should have spelled it Arktik, then perhaps we’d all pronounce it
correctly.

▶ NASA Finds ‘Amazing’ Levels Of Arctic #Methane And CO2:
http://youtu.be/vKJykIsarBw ~We don’t want you to run out of stuff to worry
about!
++++
‏@Peta_de_Aztlan

The most important fact of the CARVE research is the observation of methane plumes 150 km in diameter. Leaving this monumental empirical fact out of the presentation makes me wonder about your priorities.