West Nile virus in the context of climate change 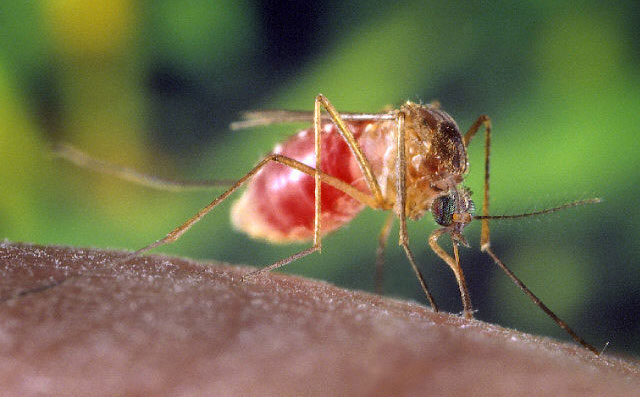 2008: West Nile virus (WNV), a flavivirus maintained in the bird-mosquito transmission cycle, first arrived in Canada in the summer of 2001.

WNV is now known to infect a wide range of birds, with secondary transmission to many mammals as well as humans in Canada (3,4). WNV reproduces itself efficiently in a number of species of wild birds, where there is sufficient virus in the blood to infect mosquitoes (5). Many animal species, including mammals, are susceptible to natural WNV infection, but their role in transmission is unknown. Horses and humans appear to be ‘dead-end’ hosts and are not reservoirs for the virus.

In Canada, WNV appears to follow an annual cycle typical of other viruses that also primarily infect mosquitoes, birds and, incidentally, humans (5). In the spring, the virus first becomes active, either through the return of WNV-infected migratory birds or when dormant adult mosquitoes that were infected the previous year become active. Local mosquitoes become infected by feeding on the newly returned infected birds. Previously infected mosquitoes can also infect susceptible birds. Each infected bird can then infect several more mosquitoes.

During the spring and summer, this cycle of transmission of WNV between birds and bird-feeding mosquitoes results in a major increase in the population of infected birds and mosquitoes. Of note, most of the mosquito species that feed on humans and other mammals generally do not feed on birds. By late summer, however, the species of mosquito that feeds on both birds and mammals reach their peak of annual activity and set the stage for transmission of WNV infection to humans. Review of the annual cases of WNV in Canada shows that the period of greatest risk of infection for people, horses and other mammals is in late summer and early fall (6).

Since its arrival in Canada, WNV has spread from Ontario and Quebec to the west, with predominant activity in 2007 being in Saskatchewan, Manitoba and Alberta (6). The Web site of the Public Health Agency of Canada provides regular updates on WNV activity by province (6). The Atlantic and northern regions of Canada have been relatively spared, likely due to differing species of mosquitoes. However, climate change in Canada may lead to an expansion in the geographical range and abundance of mosquitoes that can carry WNV, and an increase in WNV transmission to humans in areas where this is now low.

Currently, neither transfusion of blood products nor organ transplantation pose a serious risk for WNV transmission. Since 2003, when Héma-Québec and Canadian Blood Services started screening all blood products used in Canada, there have been no documented cases of WNV transmission via blood products. Organ, cell and tissue donors are also screened. Thus, patients and families can be reassured that blood and blood products in Canada are safe from WNV, even during the height of the mosquito and WNV season.

Symptomatic disease continues to be predominantly seen in adults, with smaller numbers reported in children (encephalitis, meningitis, tremor and flaccid paralysis) (7). The first case report (8) of intrauterine WNV transmission in 2002, involved an infant who had bilateral chorioretinitis and severe cystic destruction of cerebral tissue (temporal and occipital areas). Subsequently, there have been case reports (7,9) of WNV infection in pregnancy, with no adverse outcome in the fetus or infant. Furthermore, more recent evidence suggests that the risk to pregnant women for transmission to the fetus with an adverse outcome is not high.

A review (10) of cord blood in 2003/2004 at one hospital in Colorado showed that 4% of 566 pregnant women had immunoglobulin G antibodies to WNV. None had immunoglobulin M antibodies to WNV (10). There were no significant differences in the outcomes of infants born to seropositive versus seronegative mothers. A probable transmission via breast milk has also been reported, albeit without adverse outcomes (11). These data suggest that in WNV outbreaks, infection of pregnant women is not uncommon, but infant adverse events are rare. These data should be reassuring to pregnant women, although larger studies are needed.

Diagnostic serology for WNV is available through most provincial laboratories.

Given that there is no available human vaccine for WNV, prevention of infection in humans is centred on diminishing risks of mosquito bites (Table 1). Health Canada’s Committee to Advise on Tropical Medicine and Travel provides additional advice on protective measures to prevent arthropod bites (12). Source (2008)

The Current Global Oil War
March 18, 2020
Subscribe
0 Comments
Inline Feedbacks
View all comments
Go to Top
wpDiscuz
0
0
Would love your thoughts, please comment.x
()
x
| Reply
Cookie Consent
To provide the best experiences, we use technologies like cookies to store and/or access device information. Consenting to these technologies will allow us to process data such as browsing behavior or unique IDs on this site. Not consenting or withdrawing consent, may adversely affect certain features and functions. Learn more about the data usage on this website.
Manage options Manage services Manage vendors Read more about these purposes
View preferences
{title} {title} {title}