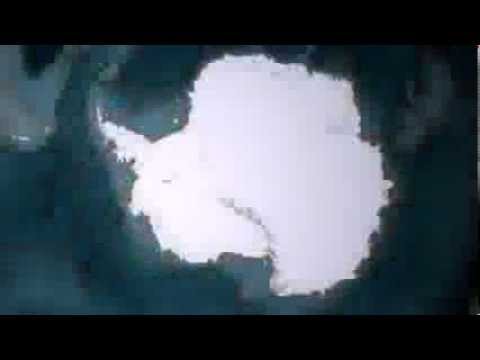 We calculate that the sub-Antarctic hydrate inventory could be of the same order of magnitude as that of recent estimates made for Arctic permafrost.

Once thought to be devoid of life, the ice-covered parts of Antarctica are now known to be a reservoir of metabolically active microbial cells and organic carbon. The potential for methanogenic archaea to support the degradation of organic carbon to methane beneath the ice, however, has not yet been evaluated. Large sedimentary basins containing marine sequences up to 14 kilometres thick and an estimated 21,000 petagrams (1 Pg equals 10(15) g) of organic carbon are buried beneath the Antarctic Ice Sheet. No data exist for rates of methanogenesis in sub-Antarctic marine sediments. Here we present experimental data from other subglacial environments that demonstrate the potential for overridden organic matter beneath glacial systems to produce methane.
We also numerically simulate the accumulation of methane in Antarctic sedimentary basins using an established one-dimensional hydrate model and show that pressure/temperature conditions favour methane hydrate formation down to sediment depths of about 300 metres in West Antarctica and 700 metres in East Antarctica.

Our results demonstrate the potential for methane hydrate accumulation in Antarctic sedimentary basins, where the total inventory depends on rates of organic carbon degradation and conditions at the ice-sheet bed. We calculate that the sub-Antarctic hydrate inventory could be of the same order of magnitude as that of recent estimates made for Arctic permafrost. Our findings suggest that the Antarctic Ice Sheet may be a neglected but important component of the global methane budget, with the potential to act as a positive feedback on climate warming during ice-sheet wastage. Source

Aug. 29, 2012 — The Antarctic Ice Sheet could be an overlooked but important source of methane, a potent greenhouse gas, according to research published August 29 in Nature and conducted by an international team led by Professor Jemma Wadham from the University of Bristol’s School of Geographical Sciences.

The researchers estimate that 50 per cent of the West Antarctic Ice Sheet (1 million km2) and 25 per cent of the East Antarctic Ice Sheet (2.5 million km2) overlies preglacial sedimentary basins, containing about 21,000 billion tonnes of organic carbon. Team leader, Professor Wadham said: “This is an immense amount of organic carbon, more than ten times the size of carbon stocks in northern permafrost regions. Our laboratory experiments tell us that these sub-ice environments are also biologically active, meaning that this organic carbon is probably being metabolised to carbon dioxide and methane gas by microbes.”

Dr Sandra Arndt, a NERC fellow at the University of Bristol who conducted the numerical modelling, said: “It’s not surprising that you might expect to find significant amounts of methane hydrate trapped beneath the ice sheet. Just like in sub-seafloor sediments, it is cold and pressures are high which are important conditions for methane hydrate formation.”

If substantial methane hydrate and gas are present beneath the Antarctic Ice Sheet, methane release during episodes of ice-sheet collapse could act as a positive feedback on global climate change during past and future ice-sheet retreat. ScienceDaily