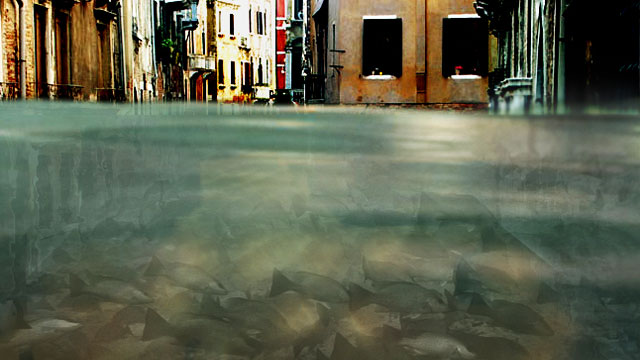 A breakthrough study of fluctuations in sea levels the last time Earth was between ice ages, as it is now, shows that oceans rose some three meters in only decades due to collapsing ice sheets.

The findings suggest that such an scenario — which would redraw coastlines worldwide and unleash colossal human misery — is “now a distinct possibility within the next 100 years,” said lead researcher Paul Blanchon, a geoscientist at Mexico’s National University. The study, published by the science journal Nature, will appear in print Thursday. Rising ocean water marks are seen by many scientists as the most serious likely consequence of global warming. The UN Intergovernmental Panel on Climate Change (IPCC) predicted in 2007 that sea levels will rise by up to 59 centimeters (23 inches) before 2100 due simply to the expansion of warmer ocean waters.This relatively modest increase is already enough to render several small island nations uninhabitable, and to disrupt the lives of tens of millions of people living in low-lying deltas, especially in Asia and Africa.

But more recent studies have sounded alarms about the potential impact of crumbling ice sheets in western Antarctica and Greenland, which together contain enough frozen water to boost average global sea levels by at least 13 metres (42 feet).A rapid three-meter rise would devastate dozens of major cities around the globe, including Shanghai, Calcutta, New Orleans, Miami and Dhaka. “Scientists have tended to assume that sea level reached a maximum during the last interglacial” — some 120,000 years ago — “very slowly, over several millennia,” Blanchon told AFP by phone. “What we are saying is ‘no, they didn’t’.” The new evidence of sudden jumps in ocean water marks was uncovered almost by accident at a site in Mexico’s Yucatan peninsula that had been excavated for a theme park.

Blanchon and three colleagues from the Leibniz Institute of Marine Science in Germany discovered the remains of coral reefs that made it possible to measure with great precision changes in sea level. Using contiguous reef crests — the part of the reef closest to the surface of the water — as benchmarks, the researchers pinpointed a dramatic jump in sea levels that occurred 121,000 years ago. “We are looking at a three-metre rise in 50 years,” Banchon said.

“This is the first evidence that we have for rapid change in sea level during that time.” Only collapsing ice sheets could account for such an abrupt increase, he added. The last interglacial period, when sea levels peaked six metres higher than current levels, was warmer than the world is today. But as manmade climate change kicks in, scientists worry that rising temperatures could create a similar environment, triggering a runaway disintegration of the continent-sized ice blocks that are already showing signs of distress.

The recent breakaway of the Wilkins Ice Shelf from the Antarctic peninsula, for example, while not adding itself to sea levels, makes it easier for the glaciers that feed it to flow straight out to sea. It is still unclear whether this and other dramatic changes seen in ice sheets recently are signs of imminent collapse, or natural processes that have not been observed before.

The Yucatan peninsula is one of only a few regions in the world where the virtual absence of seismic activity over the last several hundred thousand years makes accurate measurements of sea level rise during the last interglacial possible. “What we have to do now is look at other stable areas, such as western Australia, and confirm the same reef back-jumping signature we found in the Yucatan,” said Blanchon.

“Once we have done that, we can say our findings are rock solid.” Source