Think Again: Blame the News for the Public’s Ignorance About the Climate

You are here:
2013MediaScience Talk 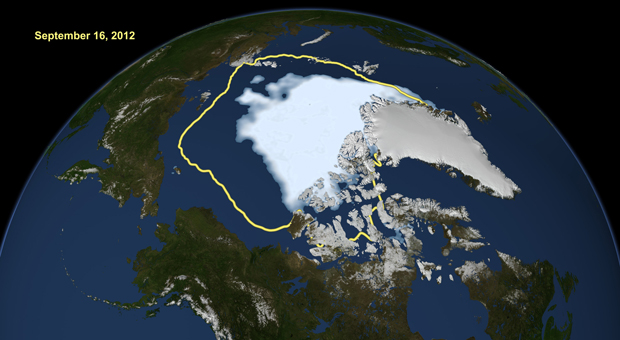 This September 16, 2012 image released by NASA shows the amount of summer sea ice in the Arctic, at center in white, and the 1979 to 2000 average extent for the day shown, with the yellow line.

By Eric Alterman | May 30, 2013: In a blog post titled, “Scientists agree on climate change. So why doesn’t everyone else?,” The Washington Post’s Brad Plumer covers a new survey by John Cook and Dana Nuccitelli of Skeptical Science. According to the survey, “Among abstracts [of published scientific papers] expressing a position on AGW [anthropogenic global warming], 97.1% endorsed the consensus position that humans are causing global warming.” Cook and Nuccitelli, who read 11,944 climate-related abstracts, confirmed the findings of earlier studies such as a 2007 report from the Intergovernmental Panel on Climate Change, which came up with similar numbers that supported the expert consensus on man-made global warming.

In the blog post, Plumer confesses his confusion as to why the world needed another such study. The survey’s authors explain that the general public remains misinformed on the issue of climate change, with about half of respondents believing that scientists are evenly divided on the question, as a recent Pew poll clearly demonstrates. Dan Kahan of Yale Law School, meanwhile, has argued at length that people tend to arrive at these types of debates with their own pre-existing cultural values. Plumer believes that this explains the generally misinformed public view.

The view that Americans hold, however, looks more rational when one considers the misinformation they regularly receive about the issue from conservative pundits and politicos and via the frequently lazy repetition of their arguments by members of the mainstream media.

This happens in a trivial way almost every day. As this Grist report notes, for instance, it happens when Sarah Palin says it’s snowing in Alaska, ergo “Global warming, my gluteus maximus,” without much pushback from the mainstream media. This is a pretty common—and ridiculous—refrain, which unfortunately is not limited to American news outlets and politicians. A recent London Review of Books article on the subject quoted a Channel 4 News anchor asking, “Should scientists admit that the drastic temperature rises they predicted have failed to materialise?” The article also notes that, “a few days later, Nature Geoscience published a paper showing summer melting on the Antarctic Peninsula at a level ‘unprecedented over the past thousand years.’”

I’ve written in the past on the myriad components of purposeful climate illiteracy in the media. Many U.S. meteorologists, for instance, who have no particular expertise in climatology, play the role of climate deniers to the general public in part because, according to meteorologist and writer Bob Henson, “There is a little bit of elitist-versus-populist tensions.” He explains, “There are meteorologists who feel, ‘Just because I have a bachelor’s degree doesn’t mean I don’t know what’s going on.’”

Alas, researchers at George Mason University found that more than a quarter of television weathercasters agree with the statement “Global warming is a scam,” and nearly two-thirds believe that if warming is occurring, it is caused “mostly by natural changes.” But even theAmerican Meteorological Society has stated that warming is occurring, and that human activities are very likely the cause. Unfortunately, according to The New York Times, researchers at Yale and George Mason found that 56 percent of Americans trusted weathercasters to tell them about global warming far more than they trusted other news media.

Moreover, as I discussed in an earlier column, the Union of Concerned Scientists, or UCS, decided to take a hard look in September 2012 at the coverage of climate science on Fox News and in the editorial pages of The Wall Street Journal, both owned by Rupert Murdoch’s News Corp. In the case of Fox, UCS found that 93 percent of segments dealing with climate science were “misleading” and designed to downgrade the danger of man-made global warming with foolish and discredited arguments. A study published in The International Journal of Press/Politics concluded, “Fox broadcasts were more likely to include statements that challenged the scientific agreement on climate change, undermined the reality of climate change, and questioned its human causes.” This may not surprise many on an instinctual level, but it is important to have this impression confirmed by careful scientific analysis. As for The Wall Street Journal, UCS found that 81 percent of the articles focusing on climate science “attempted to broadly undermine the major conclusions of climate science.”

Even PBS is in the misinformation business and has been criticized by its ombudsman, Michael Getler, who observed that the network “stumbled badly” when it broadcast a segment on “PBS NewsHour” that sought to create “an artificial or false equivalence” between global warming “skeptics” and “believers.”

103: Number of times the national “debt” or federal budget “deficit” was directly mentioned by the moderator or candidates

0: Number of times the term “climate change” was spoken or even indirectly referenced

One has to go back all the way to 1984—the height of former President Ronald Reagan’s reheated Cold War—to find a debate season where global environmental threats received so little attention. What’s more, this refusal to bring up the man-made climate threat was occurring, as Richardson noted, as millions of Americans found themselves threatened by “rising sea levels and more wildfire outbreaks, starving our agricultural base with increasingly severe droughts, and killing our citizens in an epidemic of extreme heat waves.” When asked about the absence of the topic from the town-hall debate, CNN’s Candy Crowley explained it in this way: “Climate change, I had that question. … All you climate change people. We just, you know, again, we knew that the economy was still the main thing.”

Yet another indication of how low a priority mainstream reporters consider the climate-change crisis was the decision by America’s most prominent newspaper, The New York Times, toabolish its environmental desk earlier this year. The decision came within a week of the publication of a study demonstrating that worldwide coverage of climate change was in the midst of a three-year decline.

So, contrary to the arguments above, it’s not necessary to only blame the public’s ignorance about the climate on individuals’ values or deep-seated beliefs. Blame it on what they see and hear in the news as well. Until we fix that, we won’t be able to fix the climate either.

Eric Alterman is a Senior Fellow at the Center for American Progress and a CUNY distinguished professor of English and journalism at Brooklyn College. He is also “The Liberal Media” columnist for The Nation. His most recent book is The Cause: The Fight for American Liberalism from Franklin Roosevelt to Barack Obama, released in paperback this week.

Climate on Steroids in the Arctic
July 20, 2020
Subscribe
0 Comments
Inline Feedbacks
View all comments
Go to Top
wpDiscuz
0
0
Would love your thoughts, please comment.x
()
x
| Reply
Cookie Consent
To provide the best experiences, we use technologies like cookies to store and/or access device information. Consenting to these technologies will allow us to process data such as browsing behavior or unique IDs on this site. Not consenting or withdrawing consent, may adversely affect certain features and functions. Learn more about the data usage on this website.
Manage options Manage services Manage vendors Read more about these purposes
View preferences
{title} {title} {title}